There’s a bunch of foods that start with the letter D.

But if you’re still wondering what foods start with the letter D, then this article is the right one for you!

Check out some of our favorites here, from dumplings to dewberries to daikon to dates and dark chocolate!

Keep reading down to discover delectable dishes that start with D! 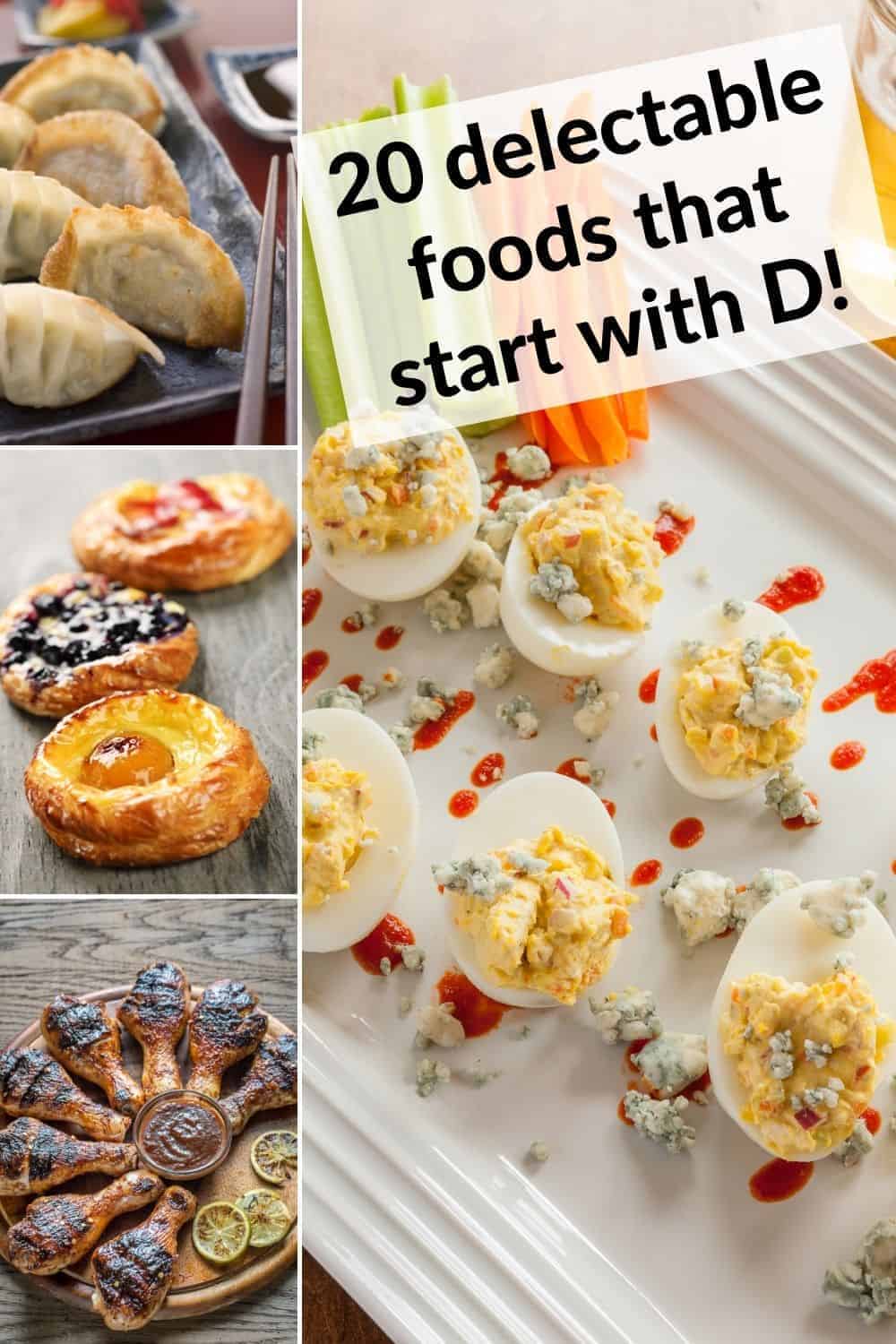 From drinks to desserts to many dishes, here are 20 foods that start with D.

Test your vocabulary and see how many you can get from this list.

Dates are a sweet fruit from the date palm tree that grows in most tropical countries. 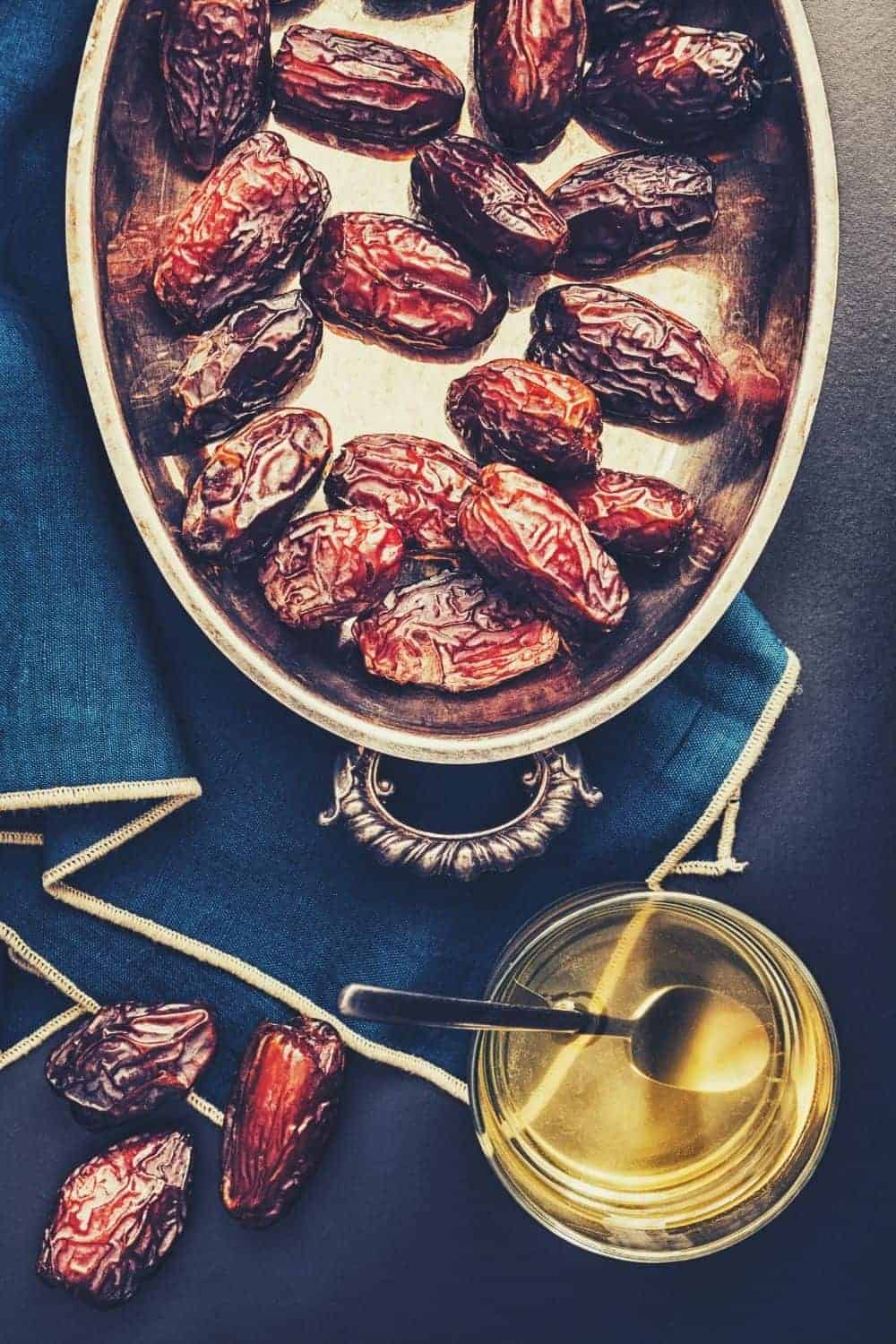 To keep it short, deviled eggs are hard-boiled eggs where the yolk is mixed with mayo, vinegar, mustard, salt, and pepper.

They have a finishing touch of paprika during the last minute of the preparation.

Many cooks worldwide make their versions of the recipe, such as bacon deviled eggs and avocado deviled eggs. 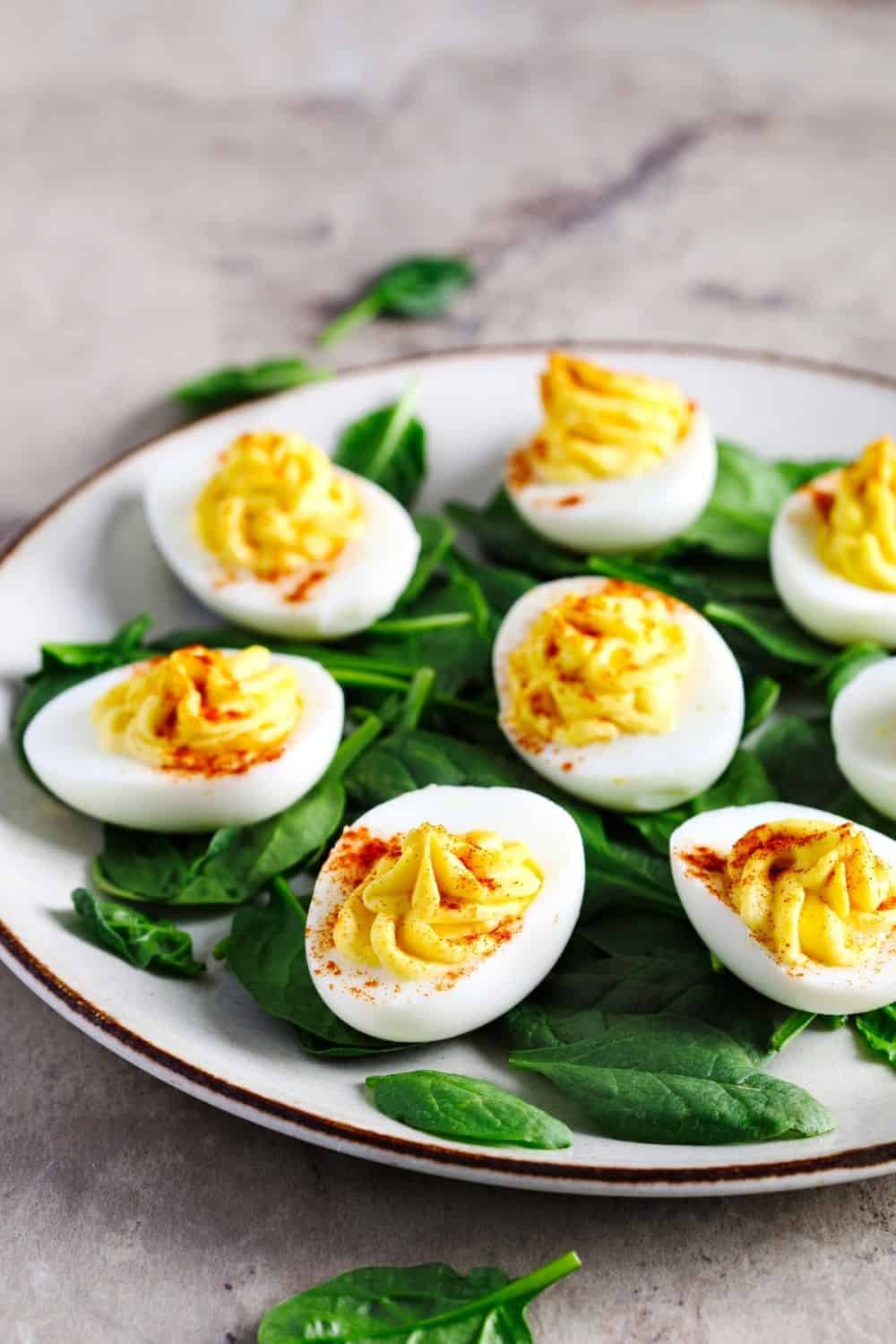 Dill is a flavorful herb used as a garnish in many dishes, one that adds an incomparable freshness and fragrance to them.

It’s popular in cuisines around the world, and often kept dried in US pantries. 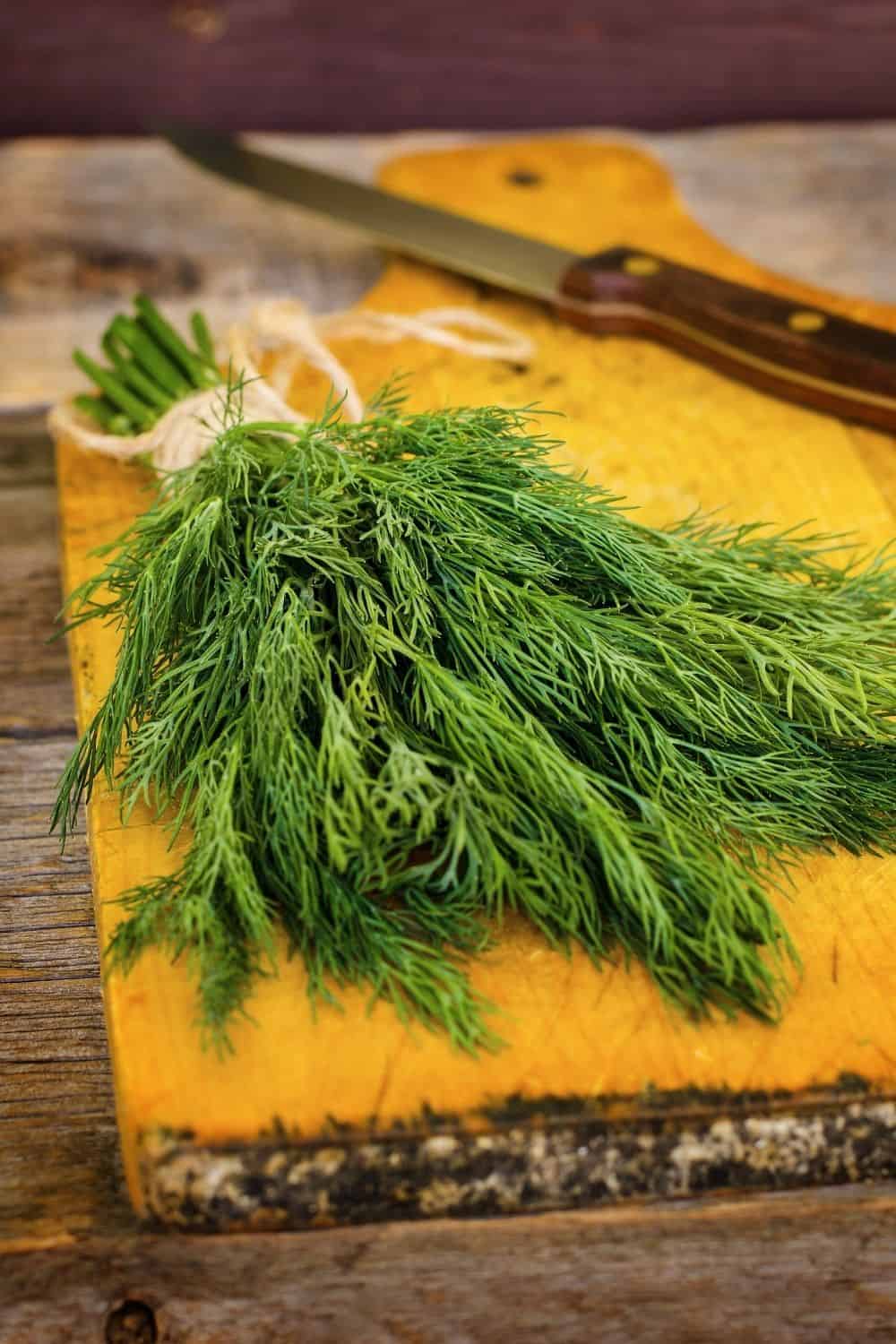 Dried apples are a tasty treat that’s easy to put together.

Dried apples have a nice sweet crunch, perfect for serving when hunger kicks in the late morning or afternoon. 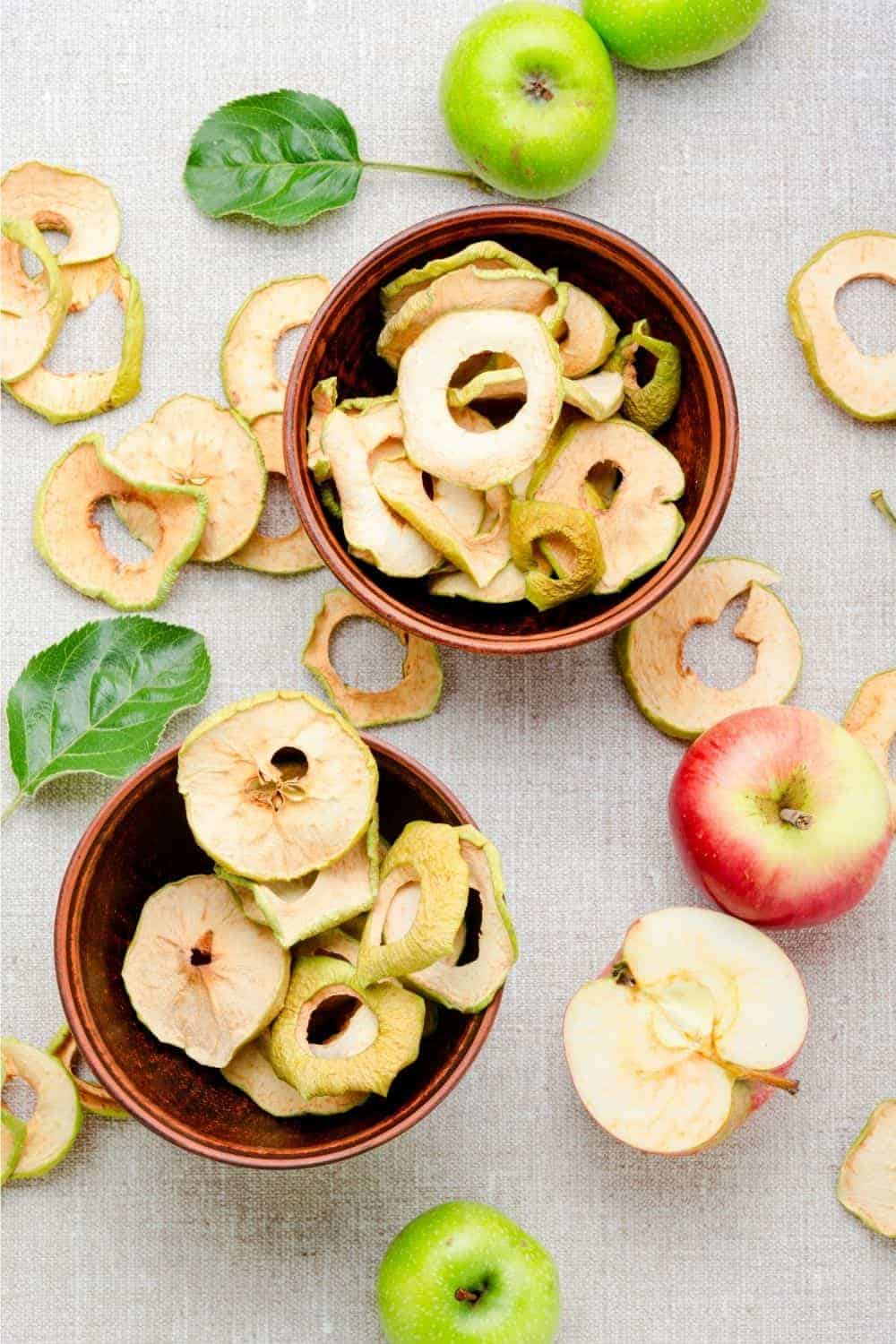 Our next food item is one of the many chocolate varieties available in the market today.

Dark chocolate is made from cocoa mass, cocoa butter, and sugar. 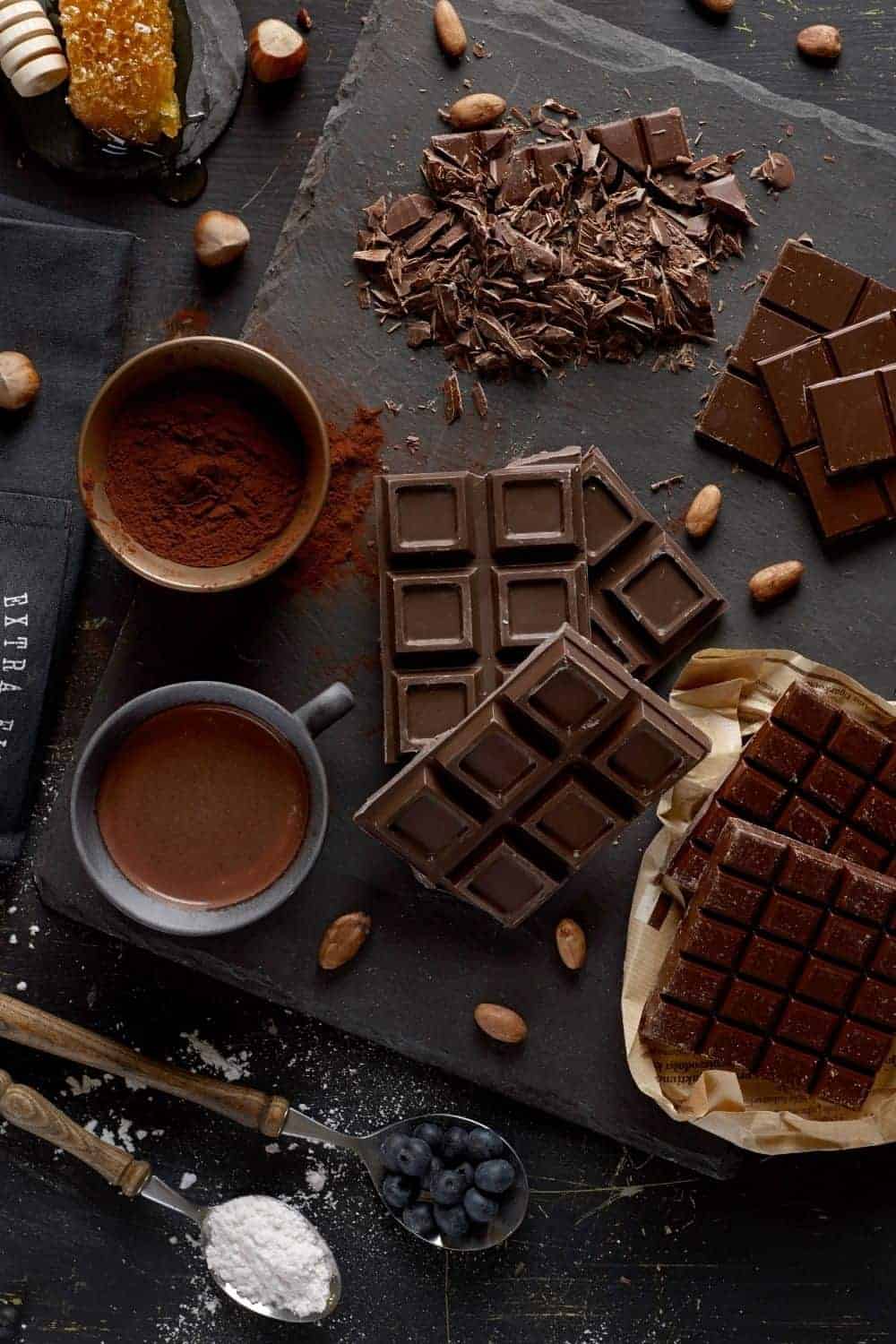 Donut is a pastry made with yeast dough and traditionally deep-fried.

With a storied past and several folks stepping up to claim even the hole itself, the donut is a beloved nosh the world over.

It’s often served at the breakfast table alongside a hot or cold coffee. 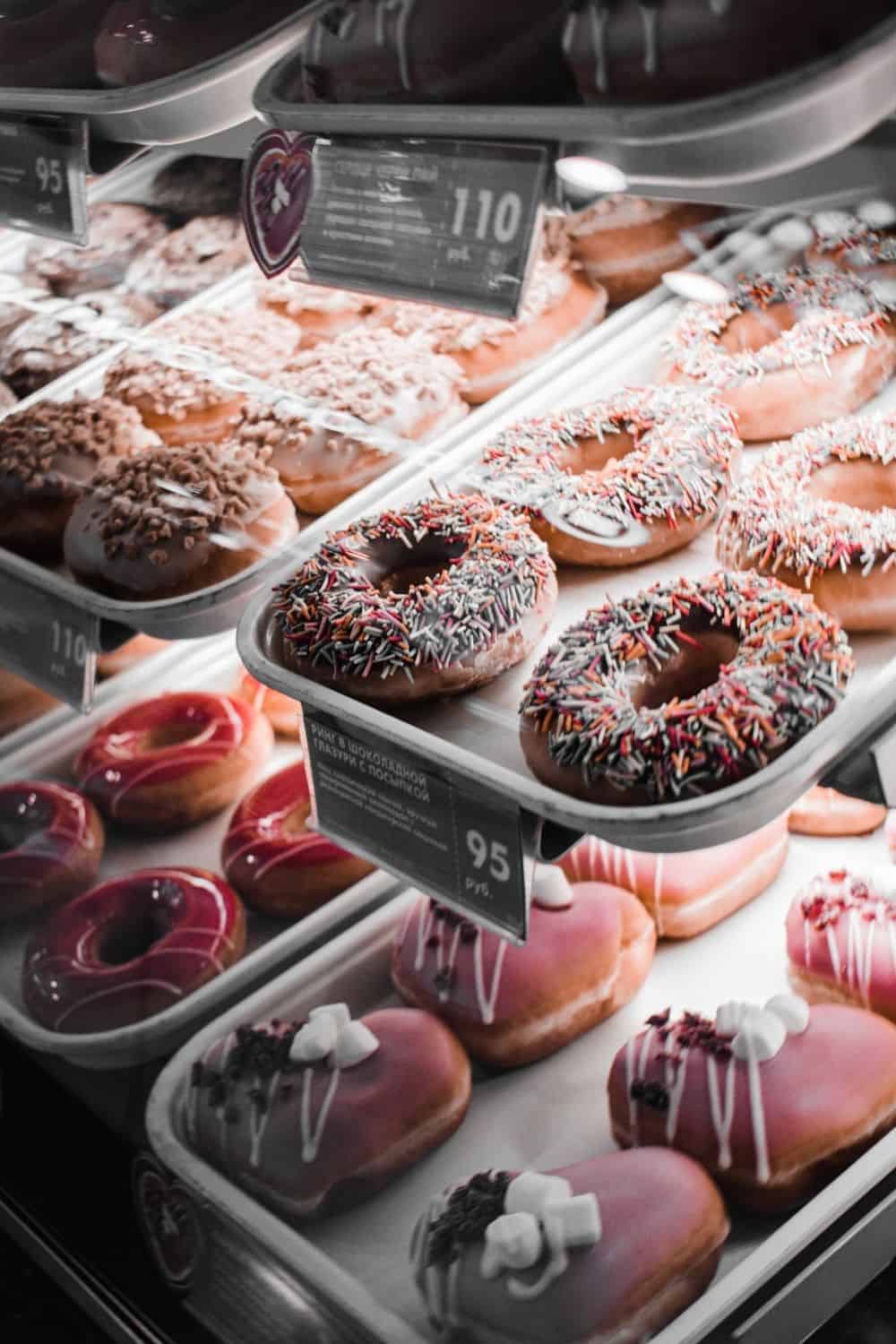 Dumpling is a delicate and bite-sized dish of different fillings wrapped in a thin layer of dough.

These treats are popular among Asian countries and often served in soup or stew.

While we show you what an Asian dumpling looks like, you may be familiar with Chicken & Dumplings, which can be thick, flat noodles or puffy dough balls that cook in the broth.

Dumplings can be a “purse” with the pucker on top that holds apple filling, or small, oval potato pasta shapes, called gnocchi.

Lots of cuisines have their own kinds of dumplings.

Which ones have you tried? 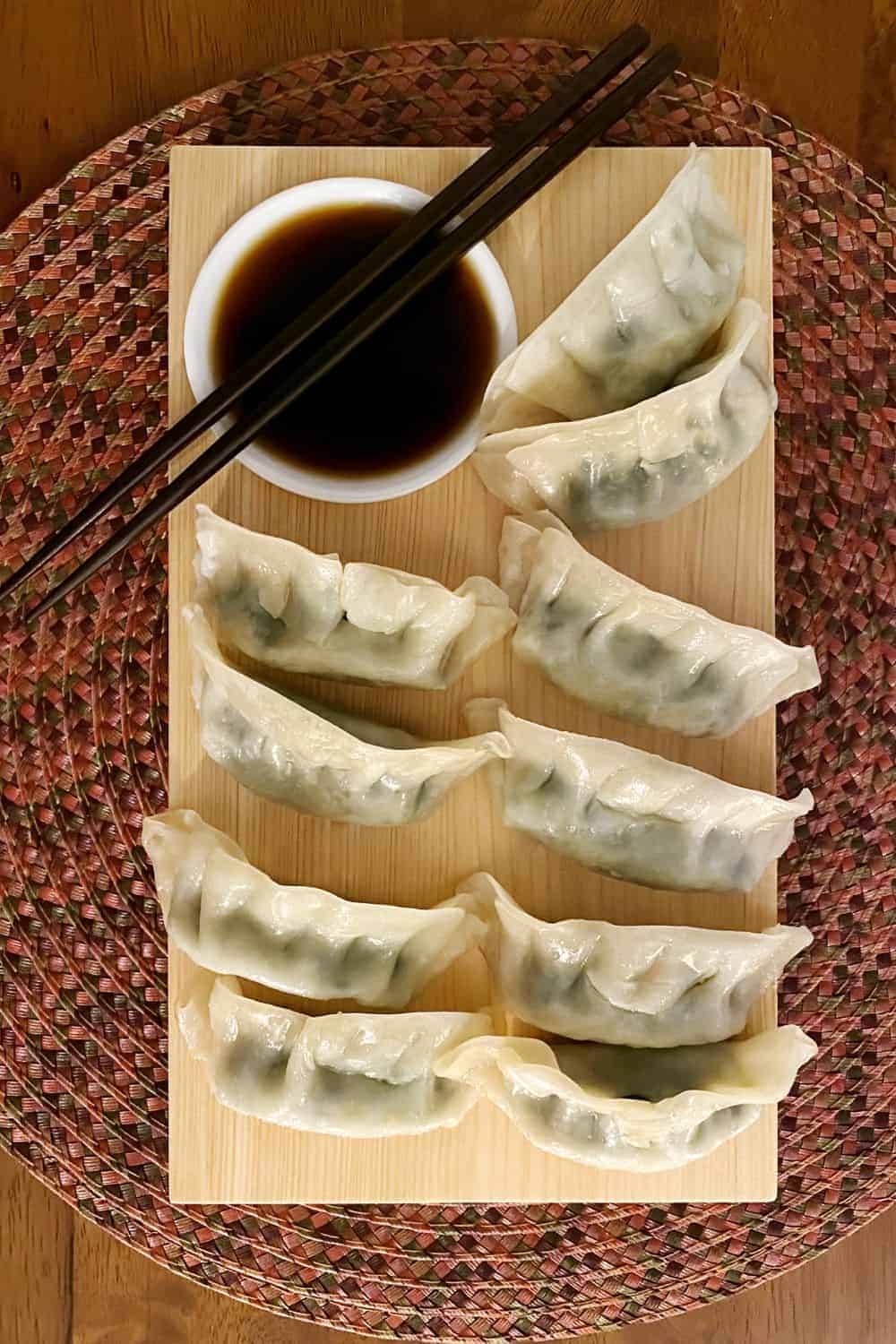 Also known as Japanese radish, daikon is a type of vegetable akin to a large white plump carrot.

It’s often eaten raw, but others prefer this white radish to be cooked or pickled. 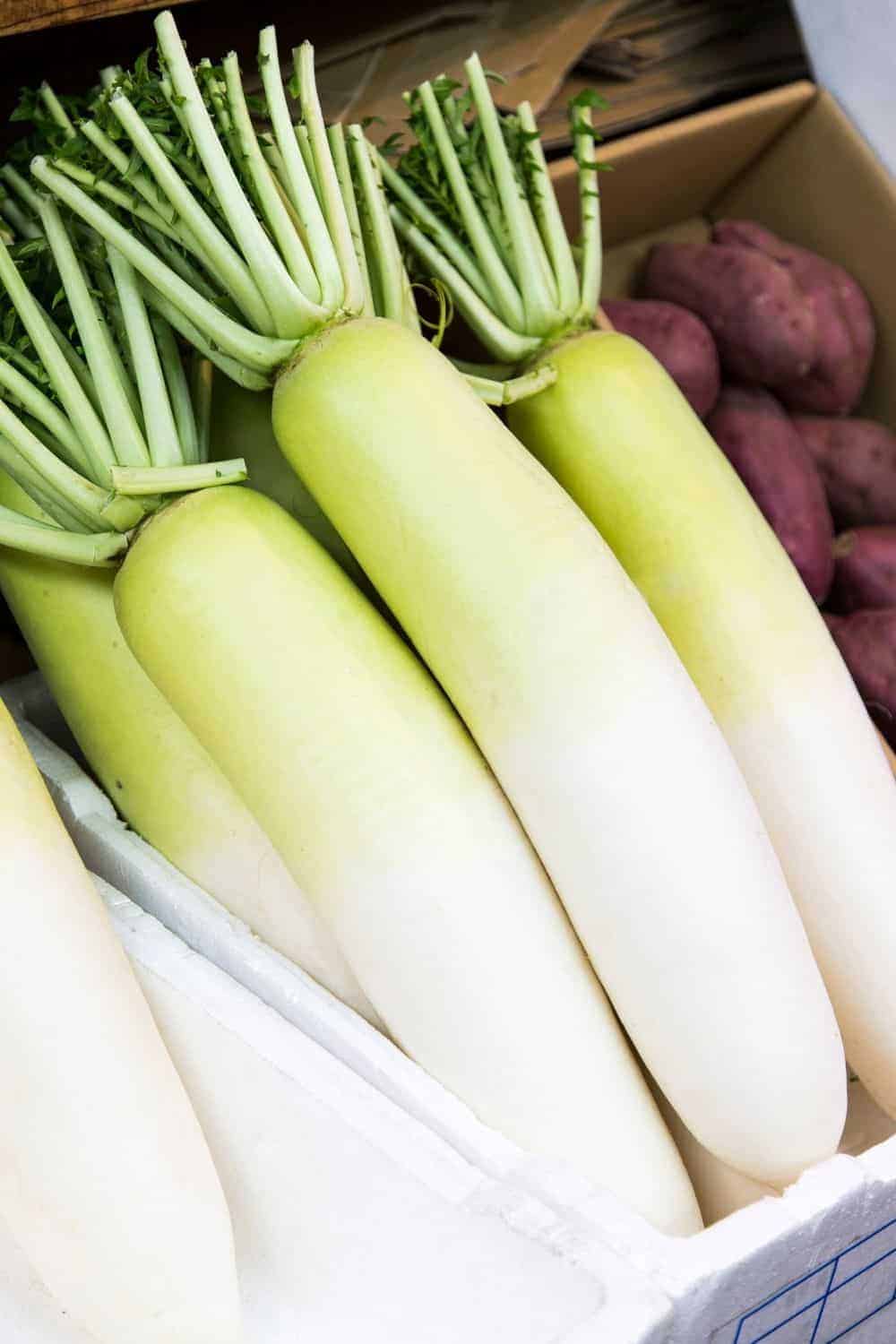 Damson is a small, tart fruit from the damson plum tree.

It has a distinct flavor profile, and the fruit is widely used for its culinary purposes, specifically in making jams and fruit preserves. 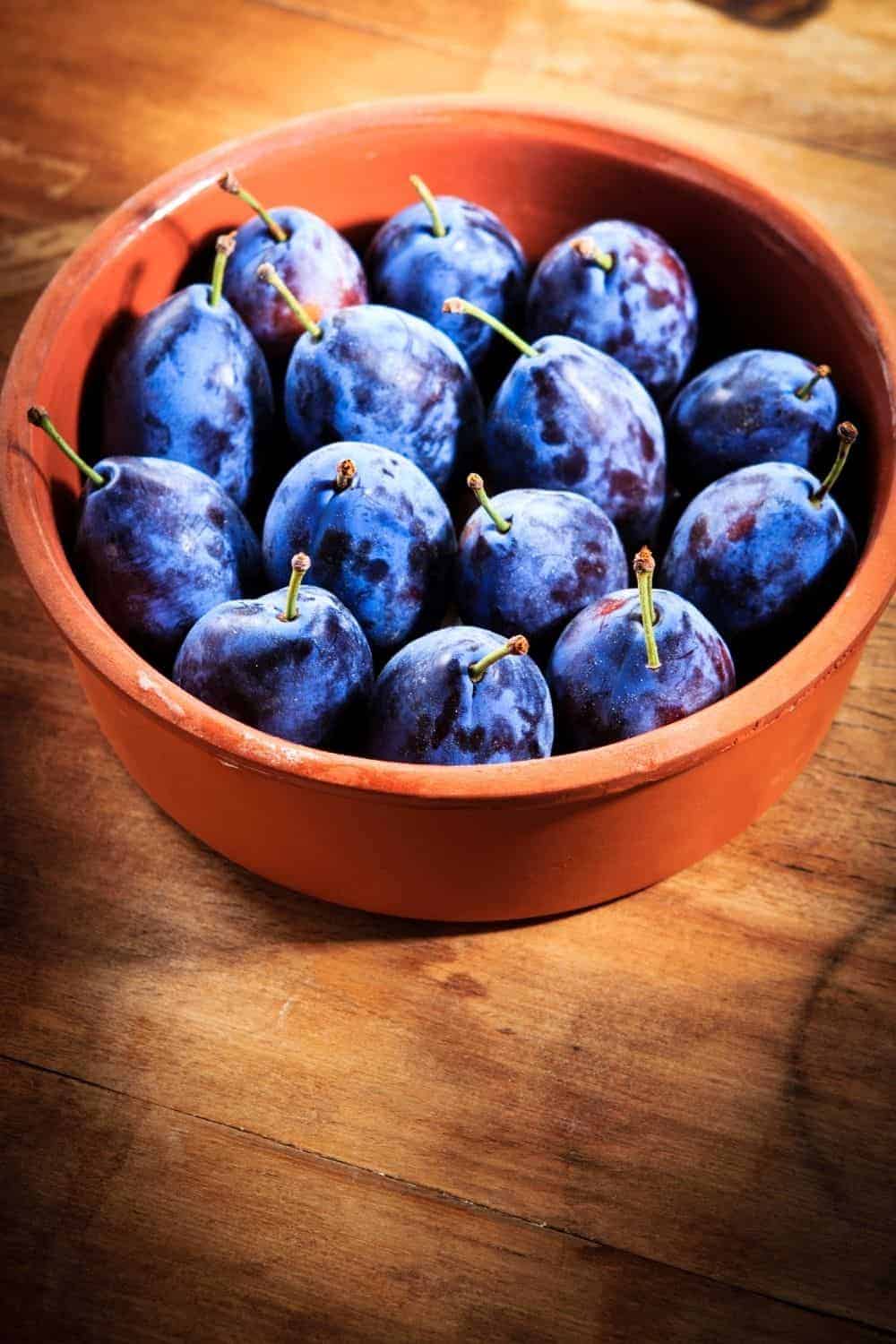 Dewberries are a kind of fruit that’s closely related to blackberries.

However, its taste is quite similar to raspberry instead of the latter.

They’re used for jam, jellies, and addition to sweet desserts like cobblers.

Do you have dewberries in stores near you? 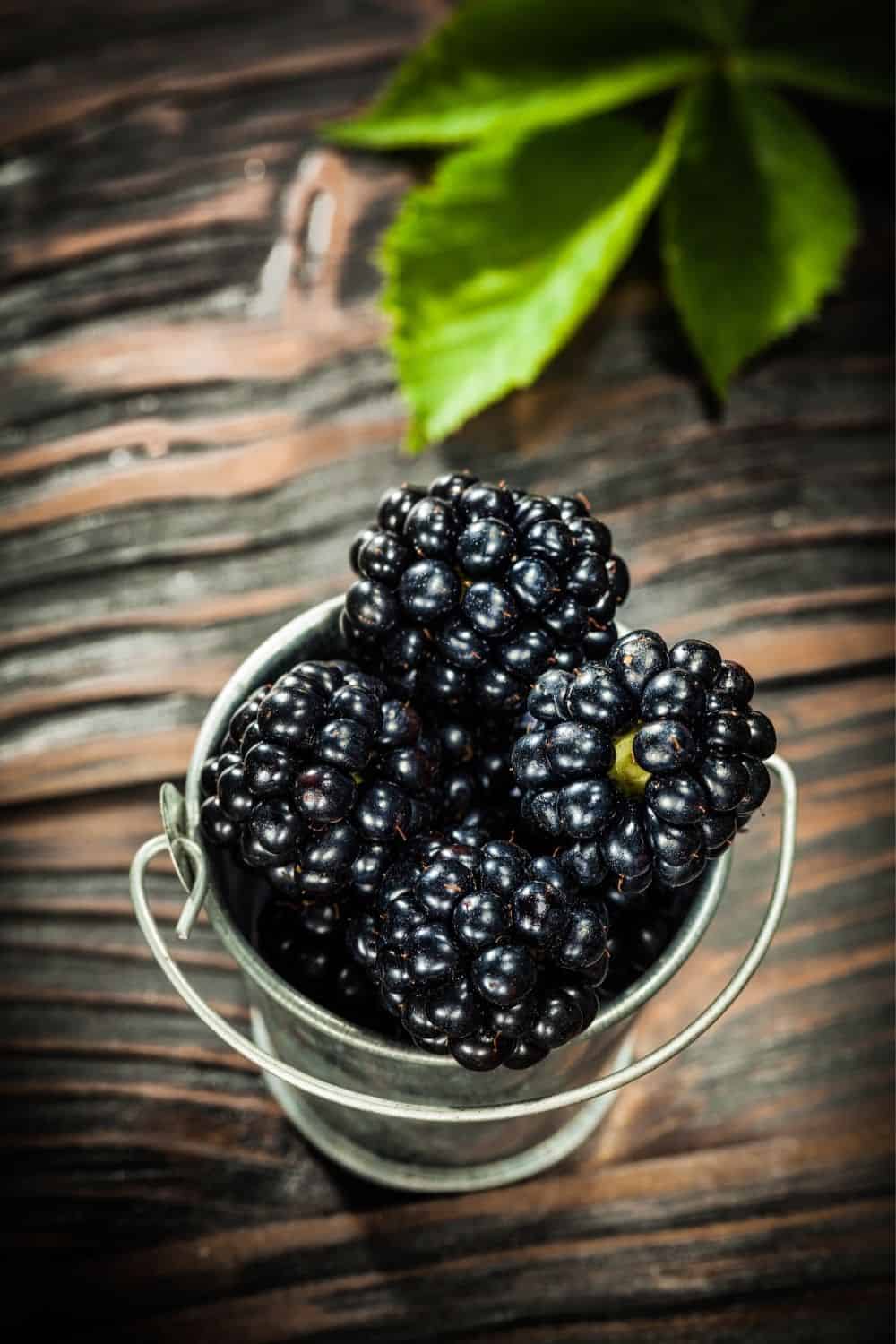 Dogfish is a member of the family Squalidae found in the waters of the Atlantic, Mediterranean, and the Black Sea.

It has a sweet and mild flavor perfect for grilling, roasting, and baking.

Some cooks use dogfish as a substitute if they’re running out of other kinds of whitefish, like cod. 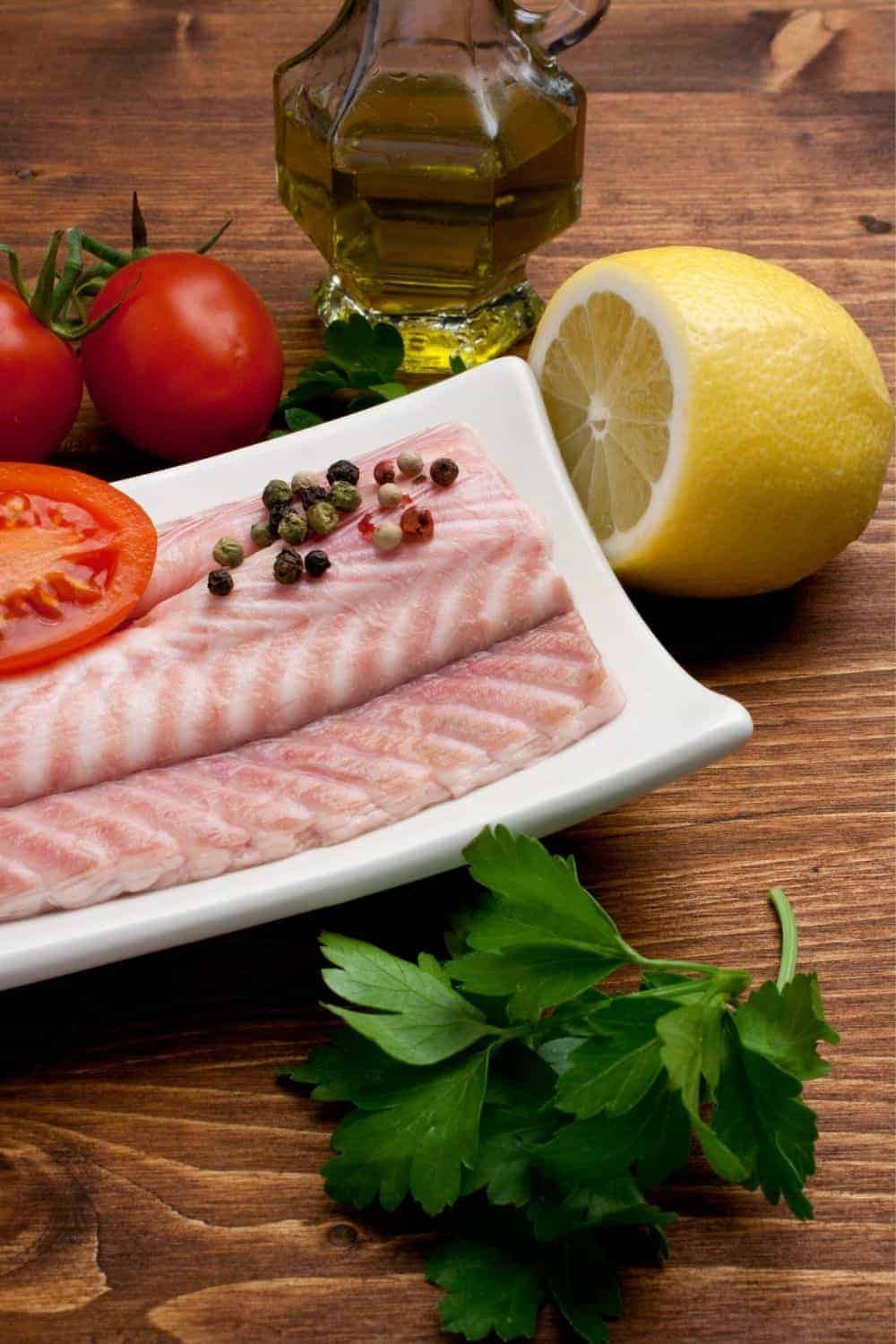 Dragon fruit is an exotic fruit from the cactus family and was initially consumed primarily in Southeast Asia and Latin America.

Its unique and sweet flavor makes this fruit a great addition to a salad or to pair up with greens like spinach.

You can turn them into a smoothie too!

Here are even more recipes that use dragon fruit! 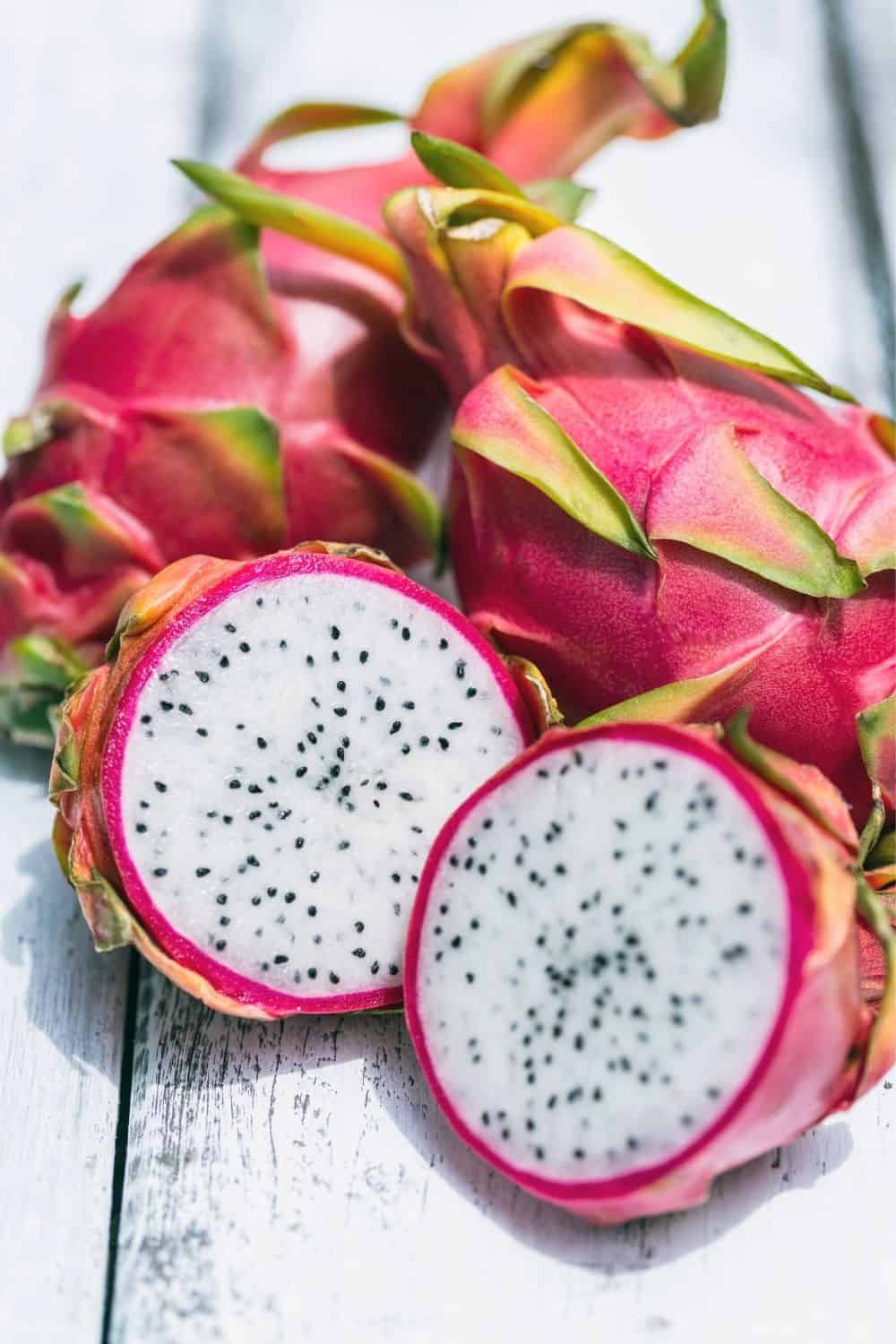 Durum wheat is a type of wheat that’s typically ground into semolina and used to make pasta.

This wheat can also become a more refined flour to create bread and pizza dough. 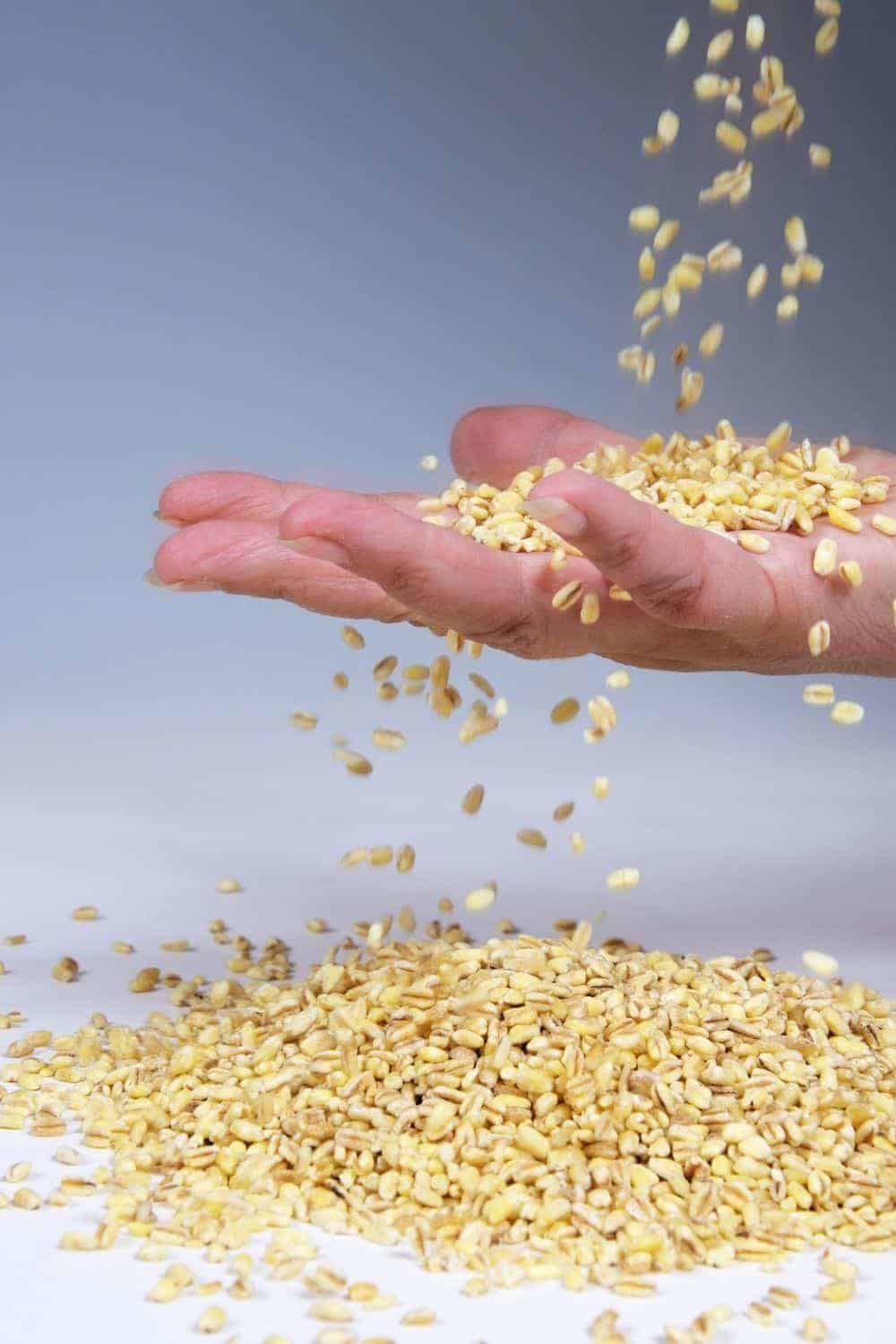 Commonly known as danish pastry, it’s a sweet pastry made from yeast-leavened dough. 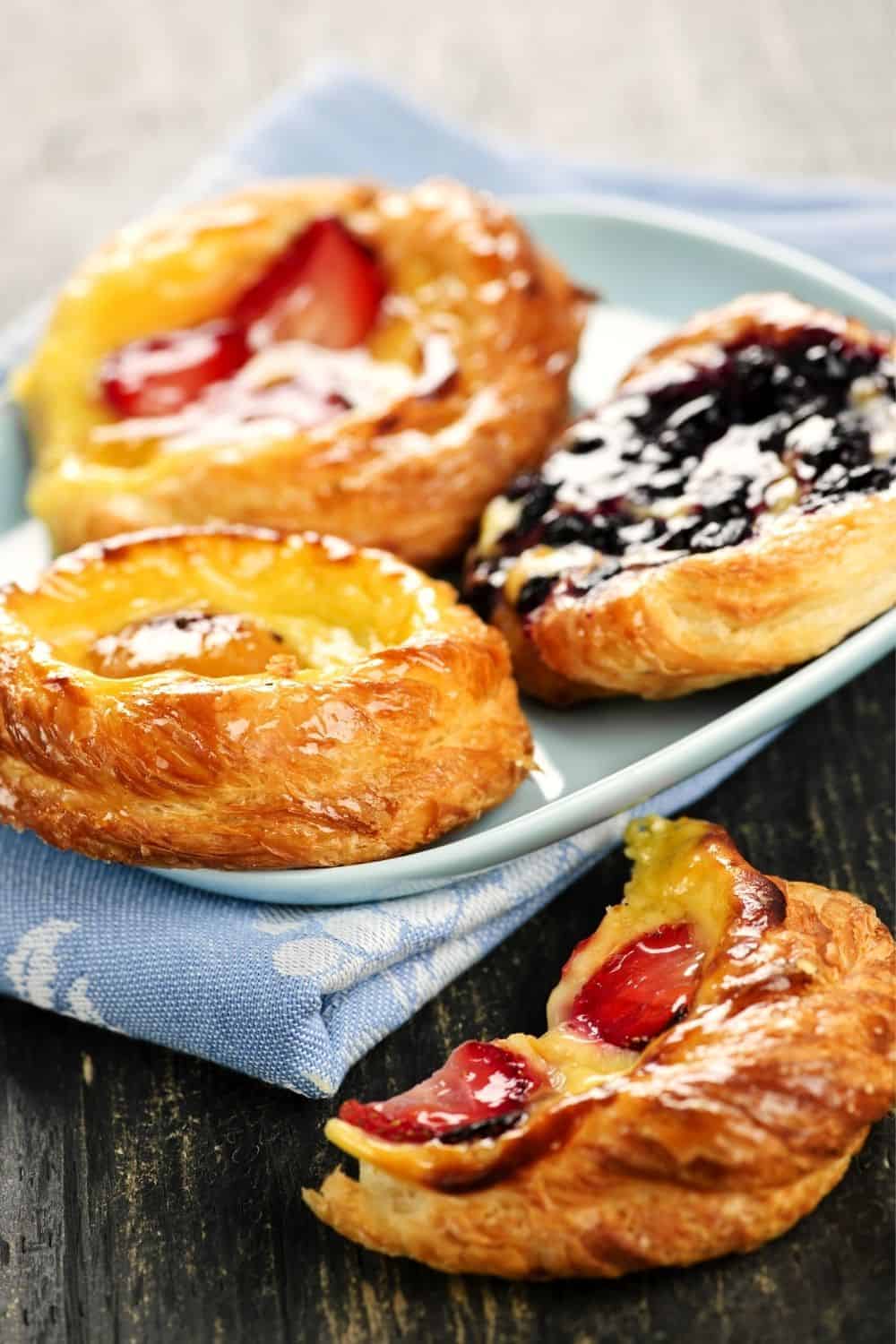 Another food that starts with D is deviled ham.

It’s a savory ham-based spread that consists of mayo, herbs, spices, cream cheese, and of course…ham.

The dish can be spread on crackers, cucumber slices, or used as a filling for a sandwich. 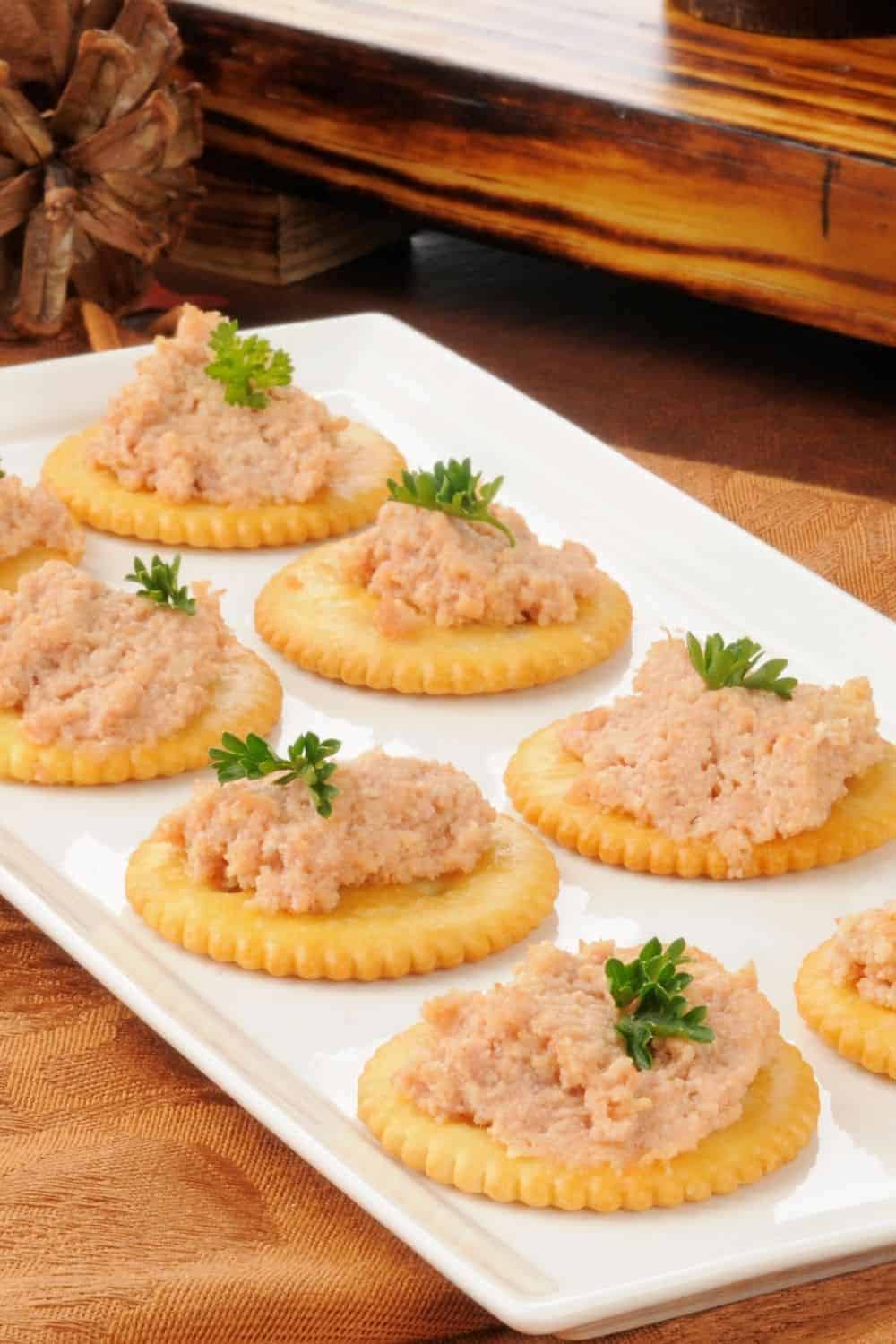 Dandelion is a type of plant often dreaded in landscaping and groomed yards all over the U.S.

But did you know you can eat almost every part of a dandelion?

There are many ways to prepare dandelion.

It has a unique flavor profile perfect for salad, stew, and soup.

However, the simple way to cook the greens is by sauteing and braising them. 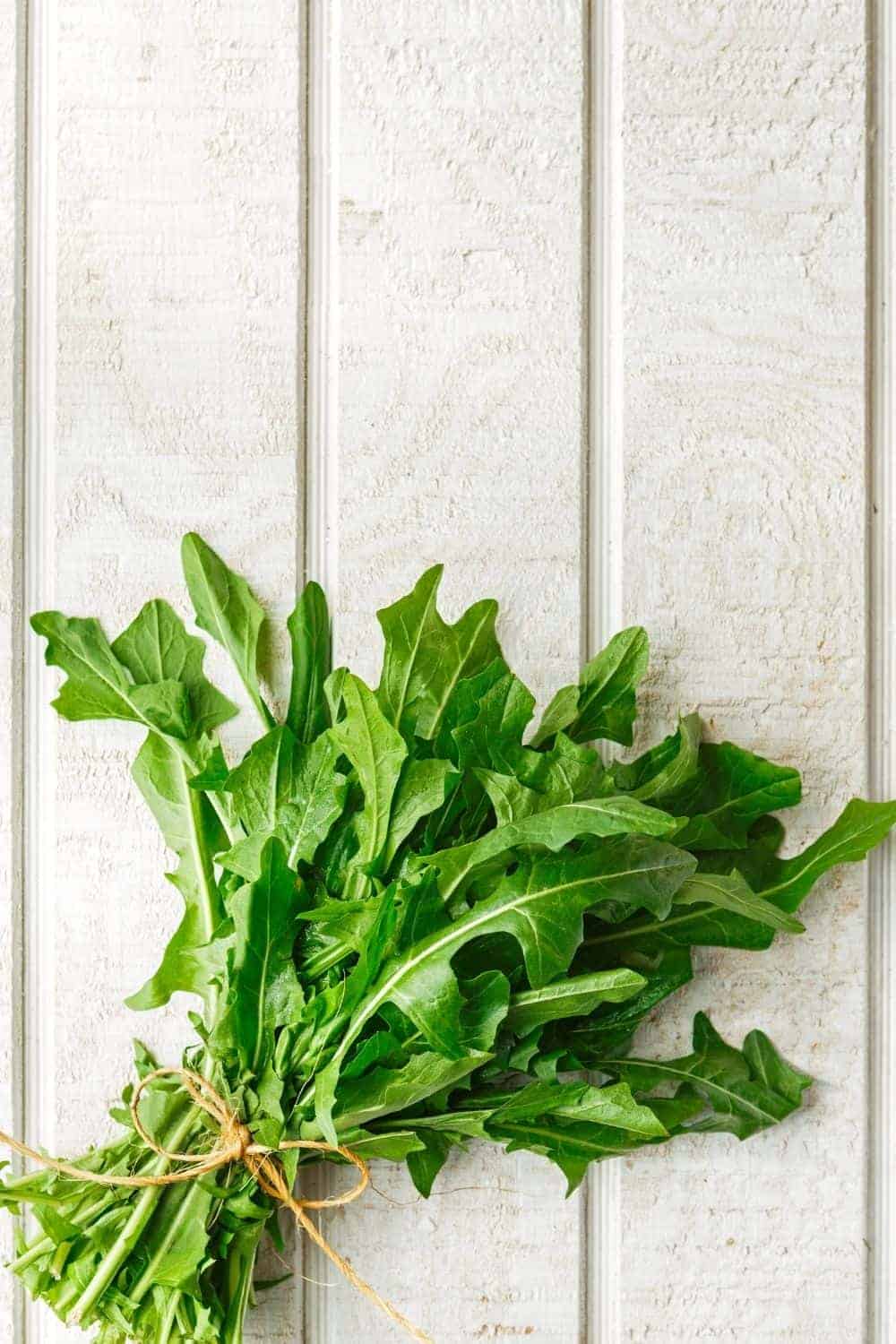 Dried squid is dried, shredded, and seasoned snack that’s made from squid, an animal that lives in the ocean.

It comes in different flavors such as sweet, spicy, or a combination of both.

You can find packets of these at Asian supermarkets, or you can try something a little different…

…and order these squid-flavored potato chips!

Or how about squid ink flavored ice cream? 😲 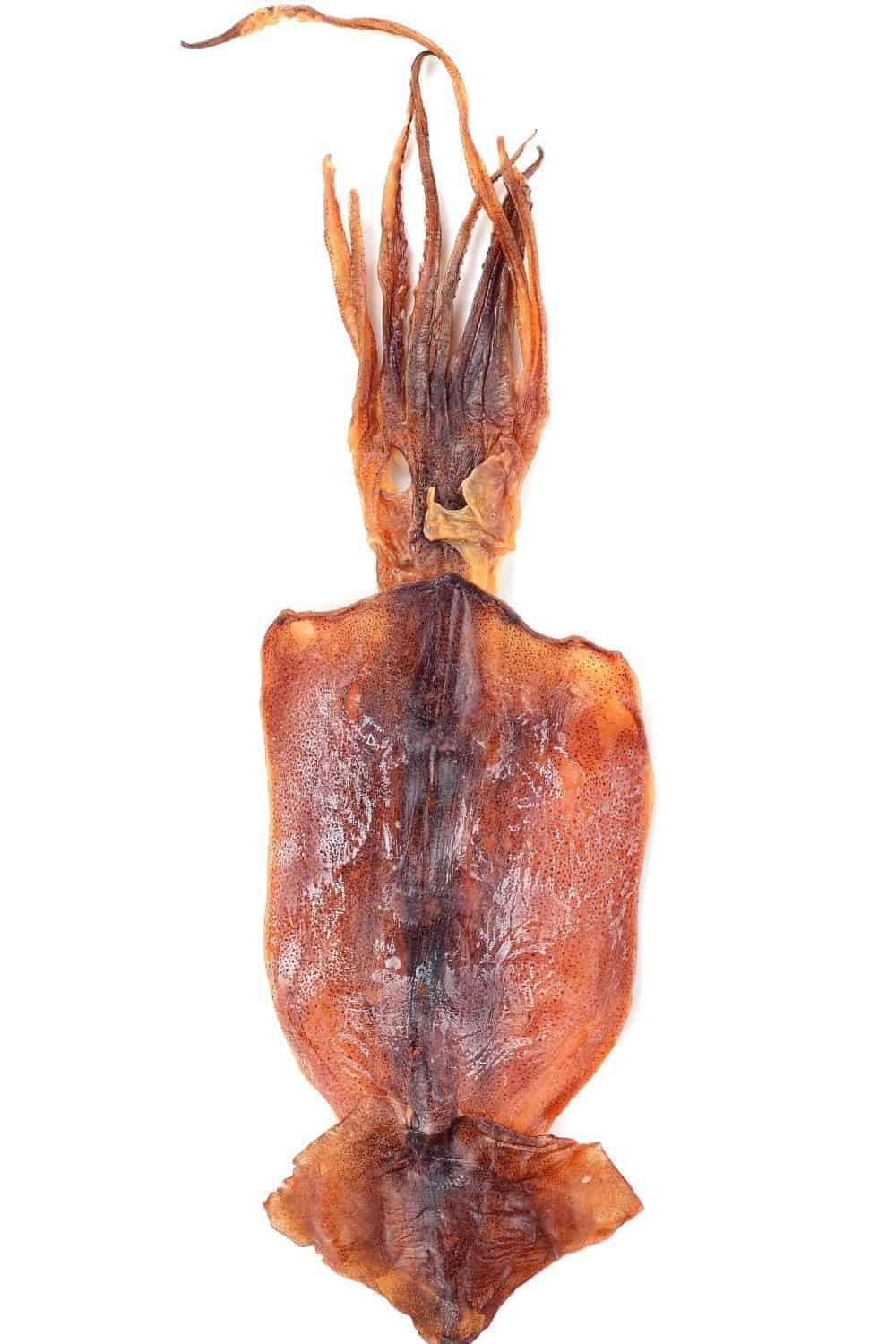 Divinity is a sweet, lightly chewy and dense dessert that’s mainly made from egg white, corn syrup, and sugar.

It’s sometimes topped with chopped dried fruits and chopped nuts like pistachios for a nice crunch.

Divinity is deliciously served as a snack during holiday get-togethers. 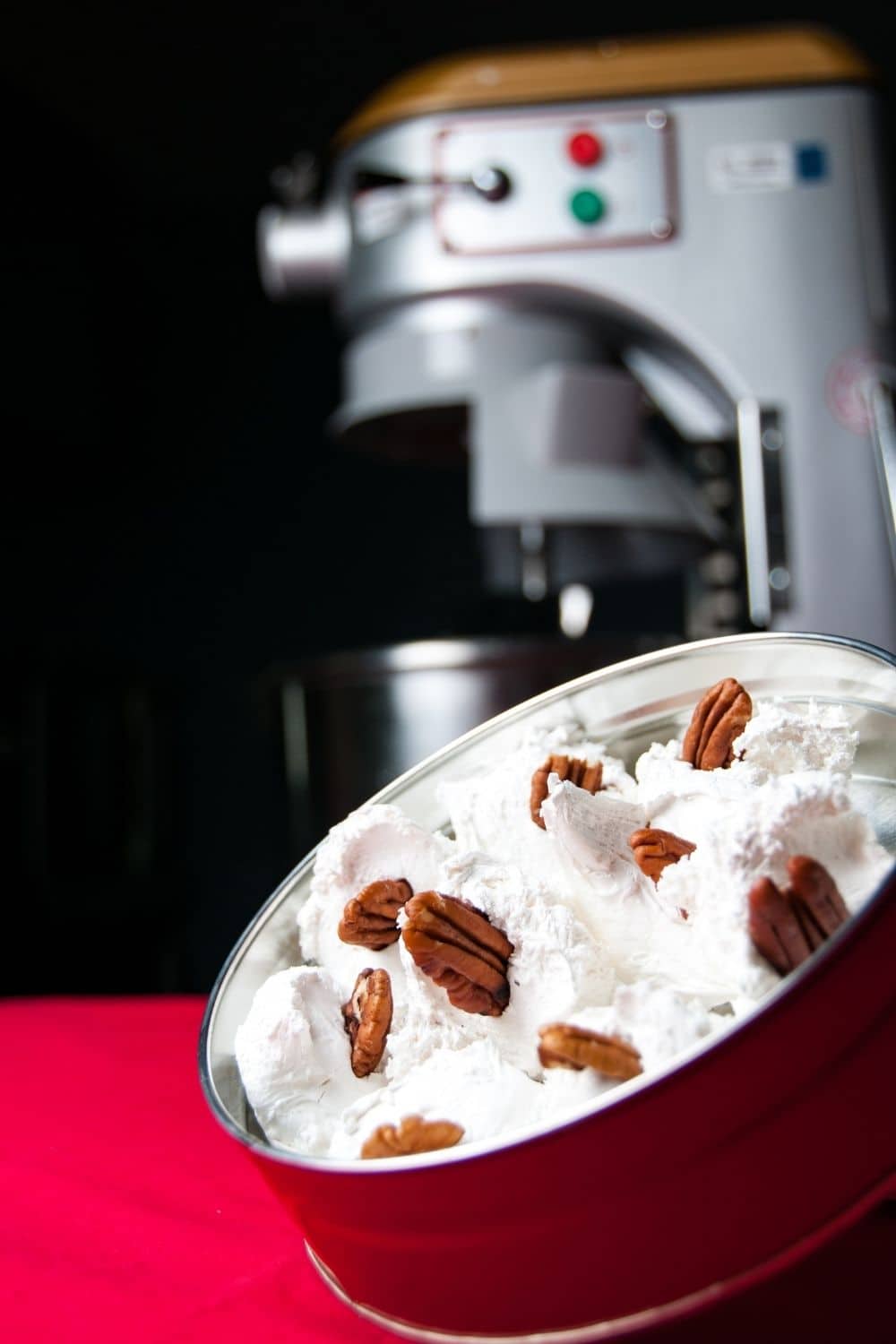 Drumstick is the name of part of the leg on a processed piece of poultry.

It’s dark meat, easily recognizable by the shape that somewhat resembles a traditional instruments held by a drummer.

There are numerous ways to cook them.

They are often included in large boxes of fried chicken, are tasty when grilled, and easy to hold while eating. 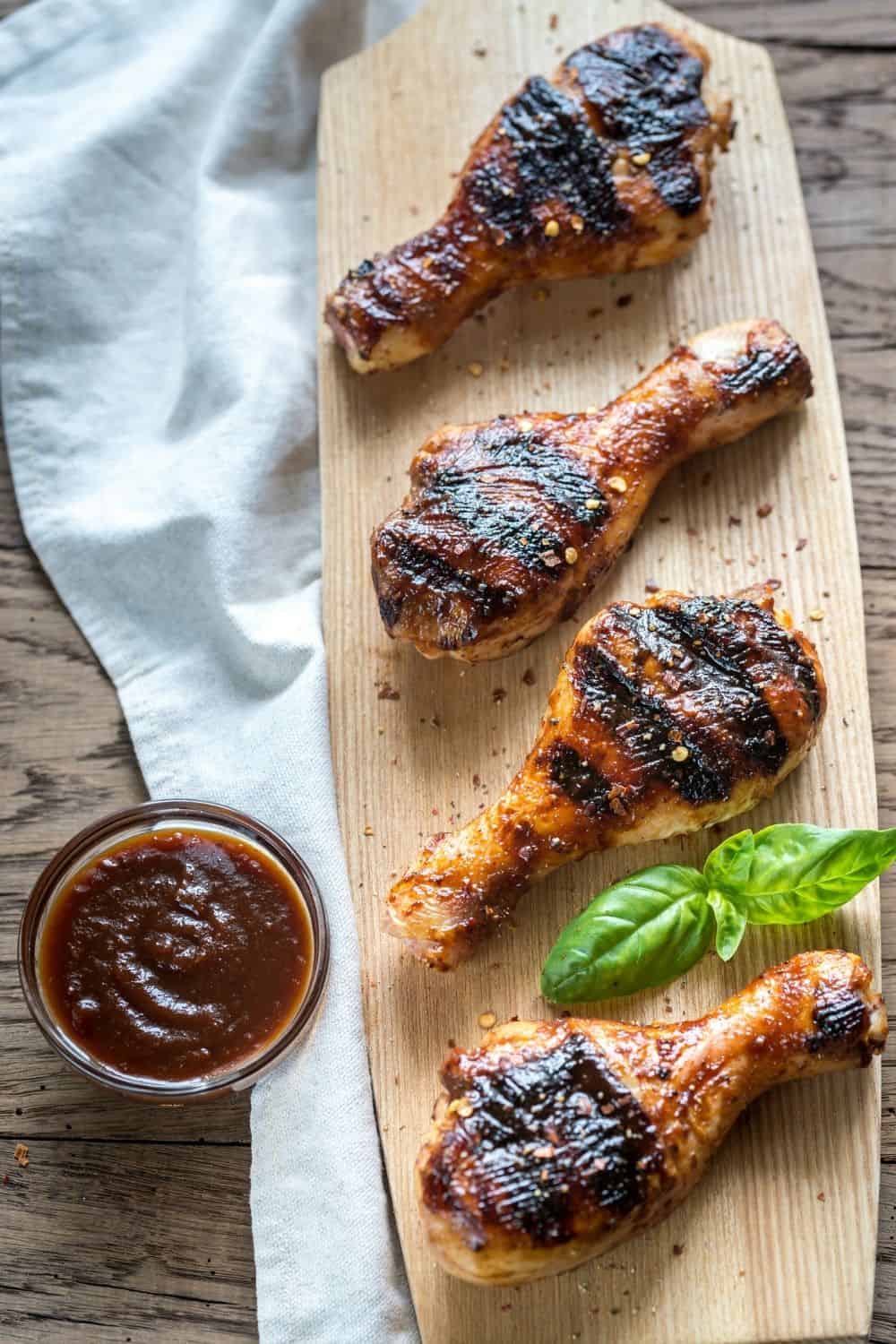 Considered as the world’s smelliest fruit, durian has a slightly oval shape with spikes surrounding it.

If you spot one in your local Asian supermarket, you may be surprised at the large size of a Durian fruit—bigger than an American football.

If you haven’t tried it yet, the fruit has an unpleasant odor with a combination of savory, sweet, and creamy flavor.

Fans of this spikey, yellow fruit report that if you can get past the rather unpleasant smell, the taste is quite delectable.

Not sure we want to find out.

Would you try Durian fruit? 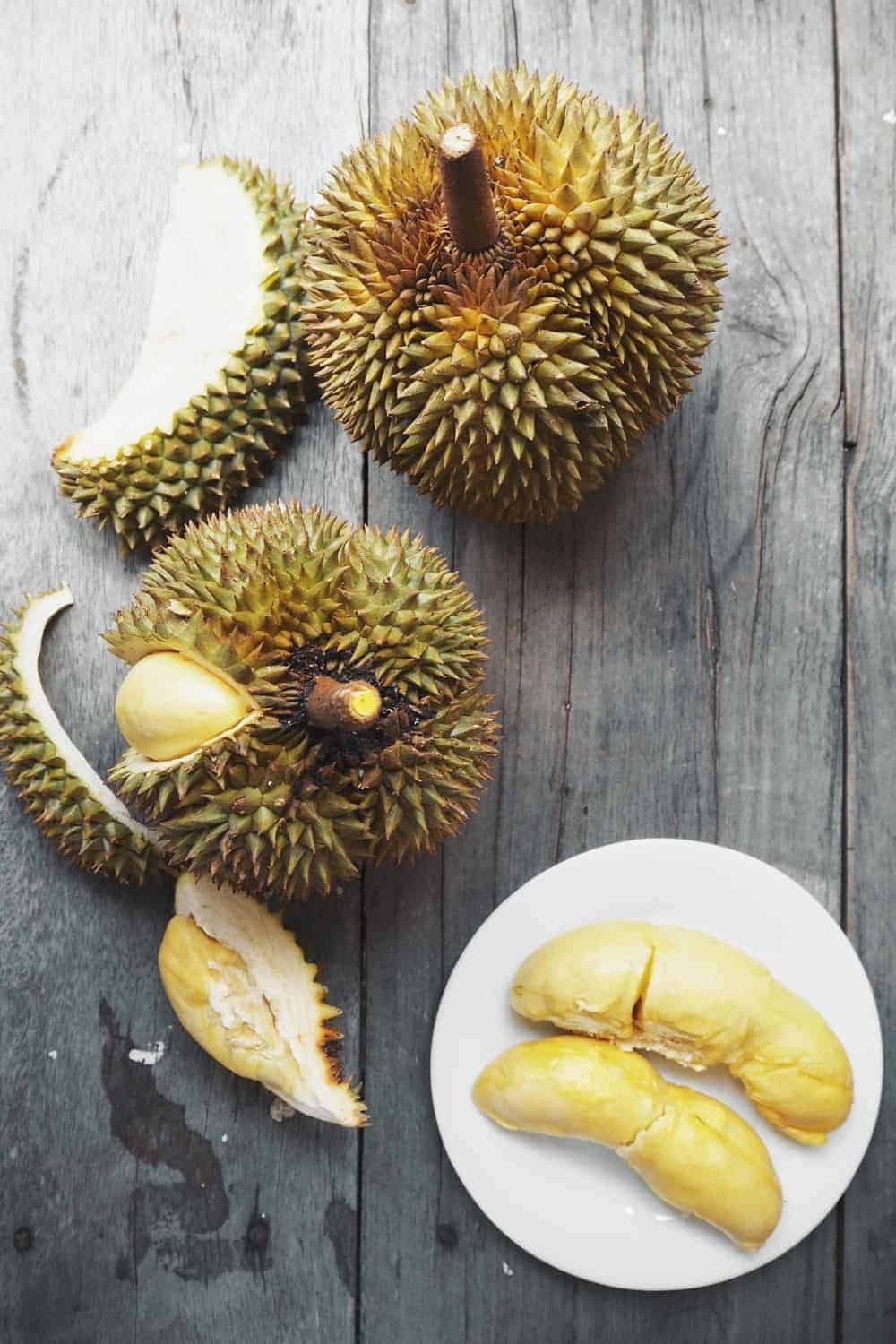 How many foods that start with the letter D in this list do you already know?

Tell us in the comments below!

I know some of these food items are already included in your vocabulary.

But I bet some of them are new to you, right?