Have you tried cinnamon popcorn yet? Imagine a perfect combination of the slight spice of cinnamon, butter, and sugar together on popcorn?

Yes! This cinnamon popcorn recipe is a perfect snack that always disappears from the bowl quickly.

These days we are watching a lot of movies at home. We even just got new media room furniture.

So when it is time to curl up on the sofa for a movie night at home, there’s one snack that instantly springs to mind, and that snack is popcorn.

Popcorn is a quick, easy, versatile, and delicious if prepared correctly. 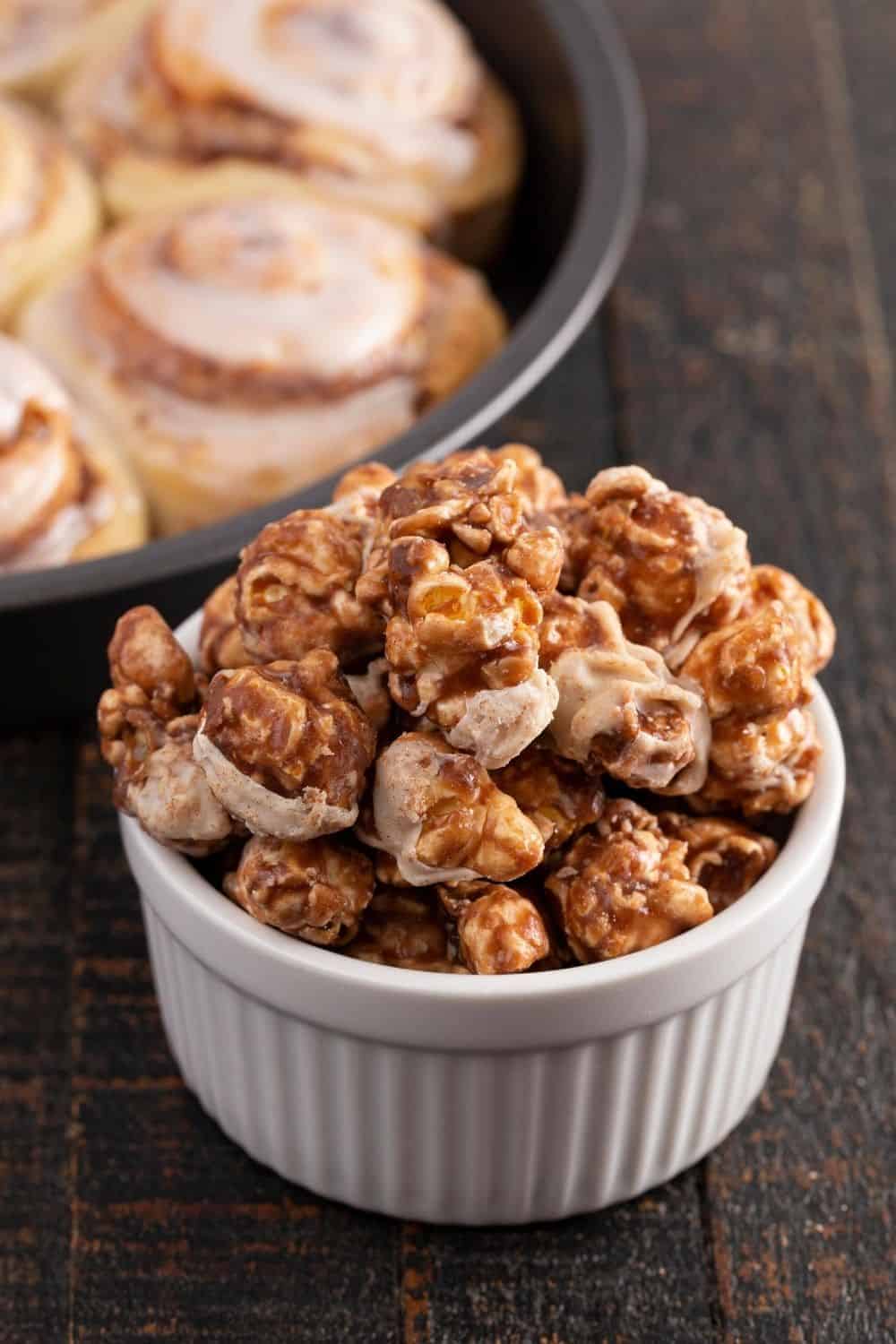 Typically, popcorn is either sweet and is coated in melted butter and sugar, or it is salted, though, in reality, you can purchase popcorn that comes in a whole variety of different flavors.

What people often fail to realize, however, is that you can actually make your very own flavored popcorn at home using simple household ingredients, which are not only more affordable than commercial brands, but they often taste much nicer as well.

Today, for example, we’re going to be looking at a tasty and simple cinnamon popcorn recipe that you can create in the comfort of your own kitchen.

What is cinnamon popcorn?

As mentioned, when people typically think of popcorn they either think of sweet or salted popcorn though as you are probably aware, there are also a number of different types of flavored popcorn to choose from.

The great thing about homemade popcorn is the fact that you can get as adventurous as you’d like when it comes to flavors, though obviously it’s best to go with tried and tested flavors that you know you enjoy.

Cinnamon popcorn is a safe bet, providing you enjoy cinnamon of course, as it is sweet, cinnamon-y, and very refreshing and palatable.

This Cinnamon popcorn recipe is made from ground cinnamon, sugar, and other tried and tested ingredients that are now synonymous with popcorn. 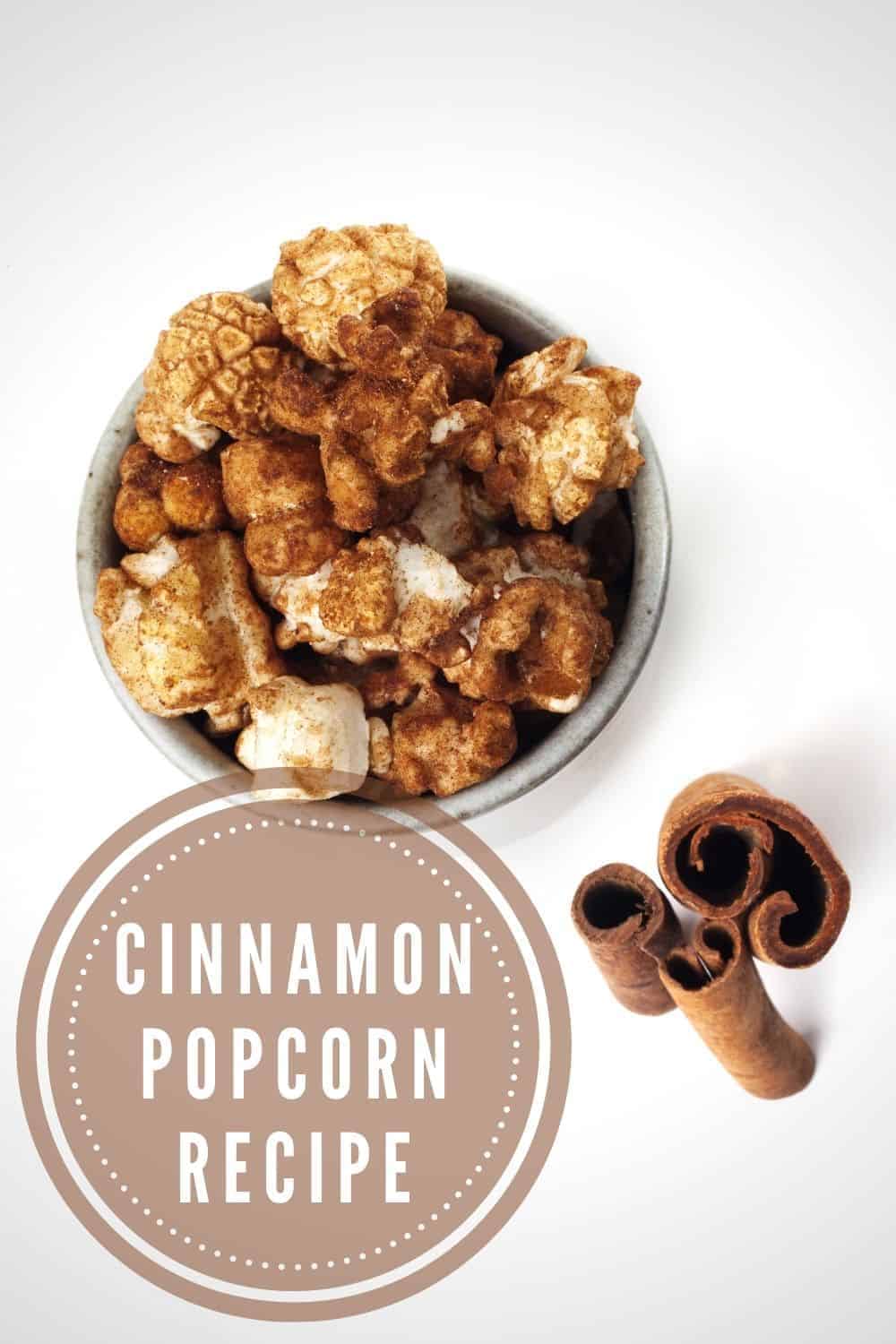 Getting the flavor to stick to homemade popcorn

One of the biggest issues that people face when making homemade popcorn, is getting the flavorings to stick.

Now, unfortunately, if you’re trying to be healthy and keep your caloric intakes low, you’ll be disappointed to hear that it is the combination of melted sugar and butter together that enables the flavorings to stick.

The idea is that you melt the butter, add the sugar and your flavorings, and then pour the mixture over the popcorn until it is evenly coated.

As the mixture cools it hardens and forms a sticky coating, which then clings to the popcorn and is baked on in the oven.

Without the melted sugar and butter, powdered spices and seasonings wouldn’t adhere to the surface of the popcorn, at least not with this recipe combination of ingredients. 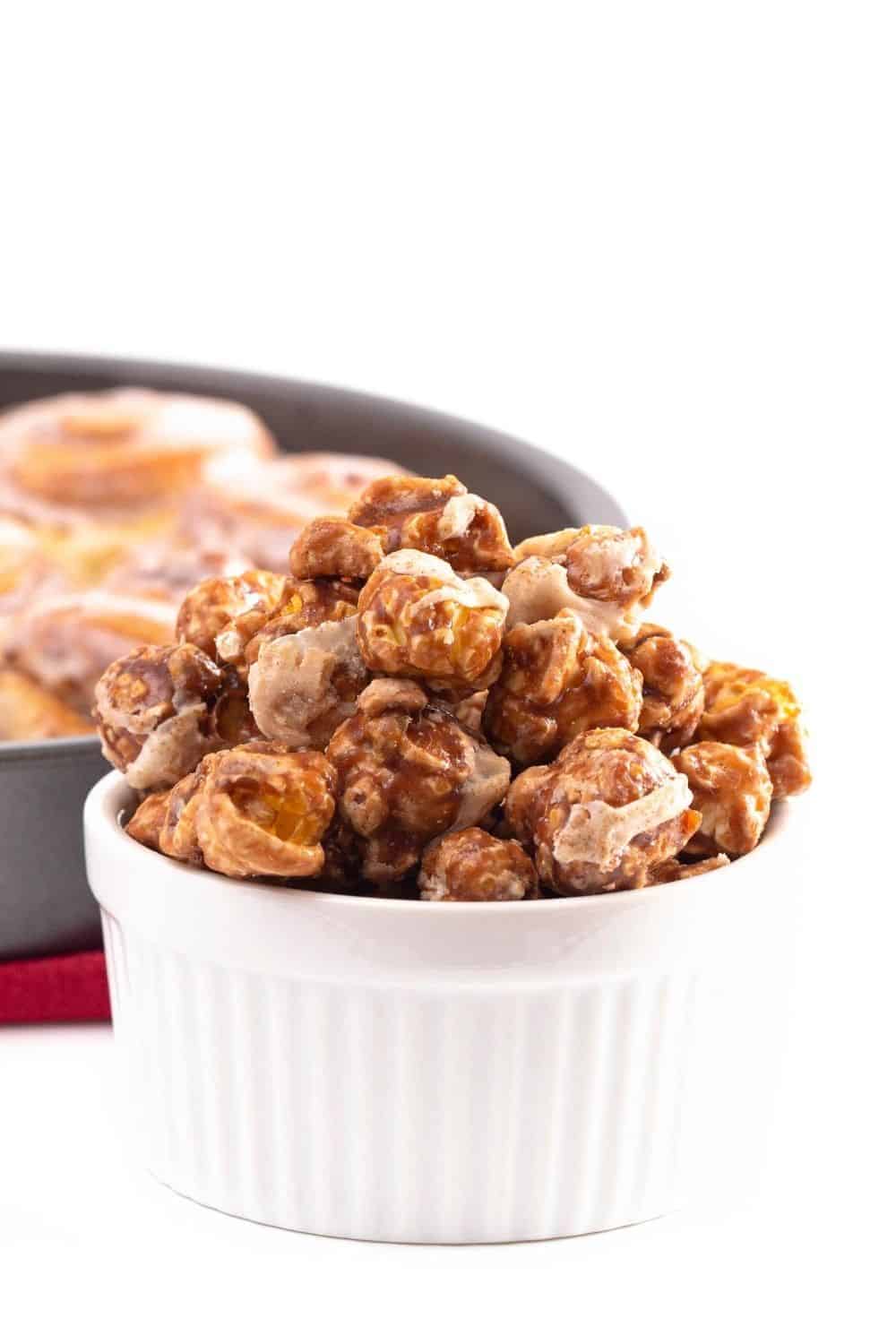 Here a few handy recipe variation ideas for you to try if you decide to tweak the cinnamon popcorn recipe listed above.

Cinnamon and white chocolate go incredibly well together, so why not try this simple recipe tweak?

Make the cinnamon-flavored popcorn as normal, and once cool, simply drizzle it with as little or as much melted white chocolate as you’d like, and then leave to set in the fridge.

Another fantastic tweak for this recipe is to add a generous glug of maple syrup to the pan of melted butter, sugar, cinnamon, salt, and vanilla, and right at the end, stir in some roughly chopped pecan nuts.

Here are a few handy tips and tricks to ensure you have the finest cinnamon popcorn recipe possible.

Wrap your tray in foil

When baking the popcorn after it’s been coated in the melted sugar and butter mixture, to prevent the sugar from sticking to the tray, burning, and causing hours of endless cleaning and scrubbing, simply coat the tray in aluminum foil before adding the popcorn.

Make in advance and bag up

The great thing about popcorn is that it can be made in advance and stored for weeks, even months.

Simply make your popcorn, store in an airtight bag or container, and it will last for around 2 – 3 weeks.

For best results, once opened, consume within one week, or even better, in one evening whilst having a movie marathon on the sofa.

Use an air fryer

If you want to make your popcorn a little healthier and cut back on the calories, instead of frying it, go ahead and pop your corn in an air fryer.

In this next section, we’re going to look at how you can make cinnamon flavored popcorn from the comfort of your own kitchen.