If there’s any cuisine that I believe has taken the world by storm, it is definitely Chinese cuisine. And I’d admit that Chinese cuisine has also taken over my kitchen by storm.

It can be fancy and sophisticated but can also be greasy takeout. And the best thing about Chinese food is that whatever form it may take, it never fails to bring tummy-rubbing satisfaction—at least for a while. 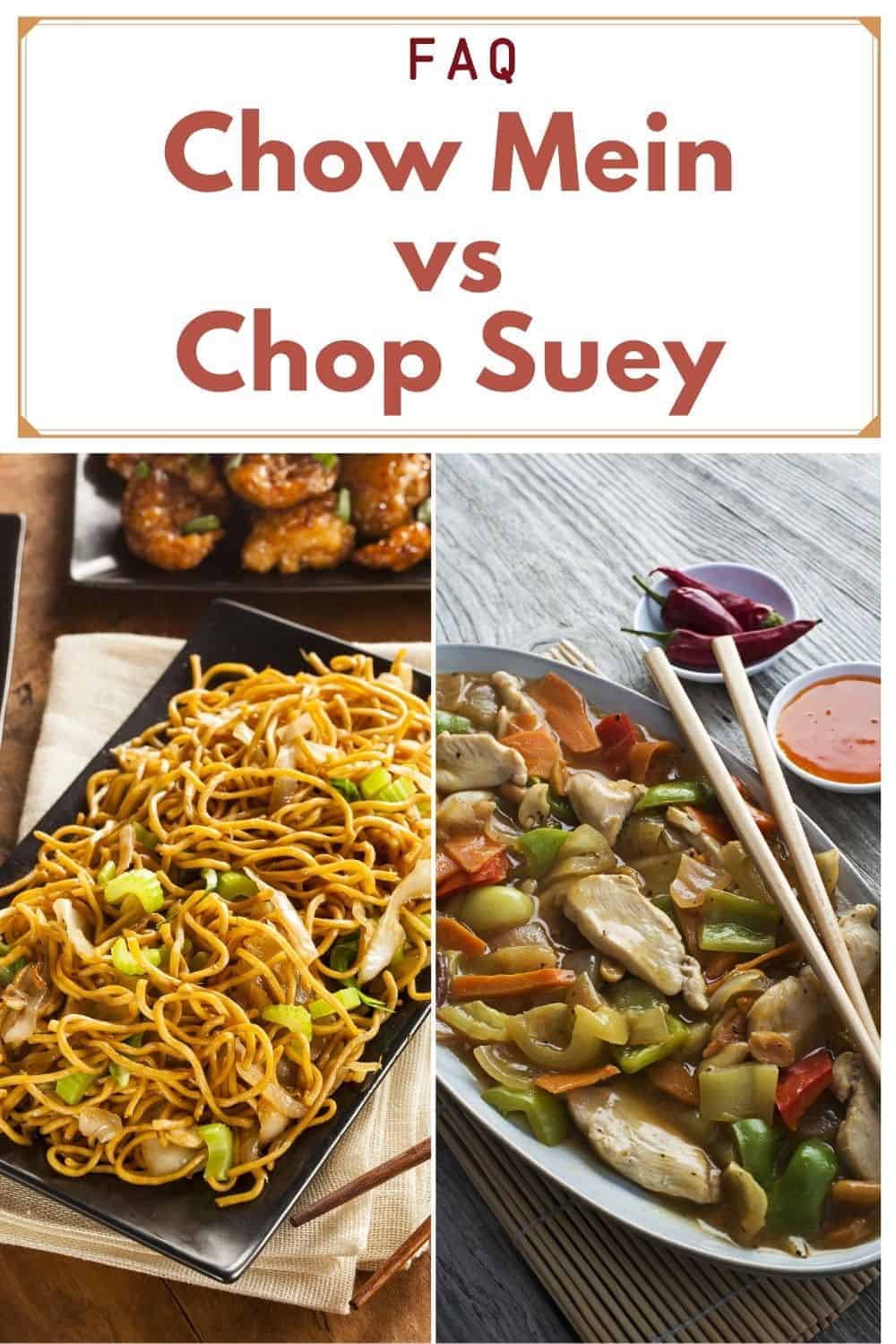 In this article, I will be breaking down two of the biggest dishes in Chinese cuisine and I will be shedding light on the main difference between chow mein and chop suey.

What is chow mein? 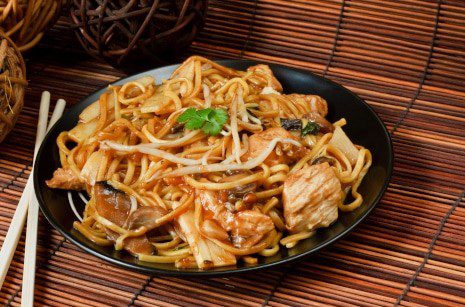 For those of you who may be unfamiliar with chow mein, let me give you a crash course. Chow mein is basically in the all-star league of noodles, along with popular noodle dishes such as pad thai, japchae or mi goreng.

Along with noodles, chicken, beef, pork or shrimp are the most popular add-ins, but tofu and just veggies are popular too. Celery and onion go in as part of the recipe.

My top favorite veggies to throw in the mix would definitely be carrots and bean sprouts. Chow mein, being a traditional Chinese dish, have also been altered in terms of preparation to suit Western tastes, as well.

I’ll be discussing its preparation more thoroughly in the coming sections.

Is any Chinese food gluten free?

Dishes made with rice noodles may be gluten-free, as long as wheat flour isn’t the thickener. Corn starch is a safe one to use if you want to thicken chow mein gravy.

For a wheat-free Chow Mein, use rice noodles instead of wheat noodles.

What is chop suey? 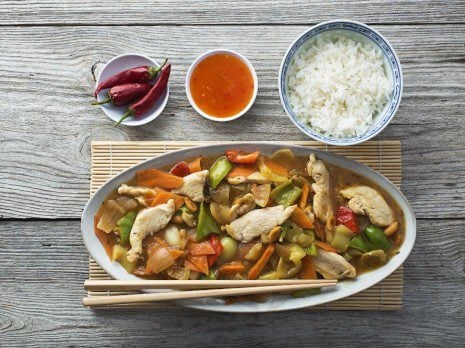 Next, let’s talk about our second Chinese dish for the day: chop suey. If you are totally unfamiliar with this dish and you’re from China, then that might have been really because chop suey is not a traditional Chinese dish.

Chop suey is part of the popular American-Chinese cuisine. The main similarity between chop suey and chow mein is that they’re both stir-fried, only except chop suey does not come with noodles.

Chop suey is a dish that consists of meat, vegetables, or seafood as well as a savory sauce, with vegetables being the dominant ingredient. In fact, it is considered a vegetable dish.

Most common vegetables thrown in the delightful mix consist of bean sprouts and celery. However, feel free to use whatever vegetable you already have at hand.

It could be broccoli or cauliflower. Just do not forget the savory and sweet sauce—the basis for what makes this a truly traditional Chinese dish as opposed to just sauteed vegetables and meat. 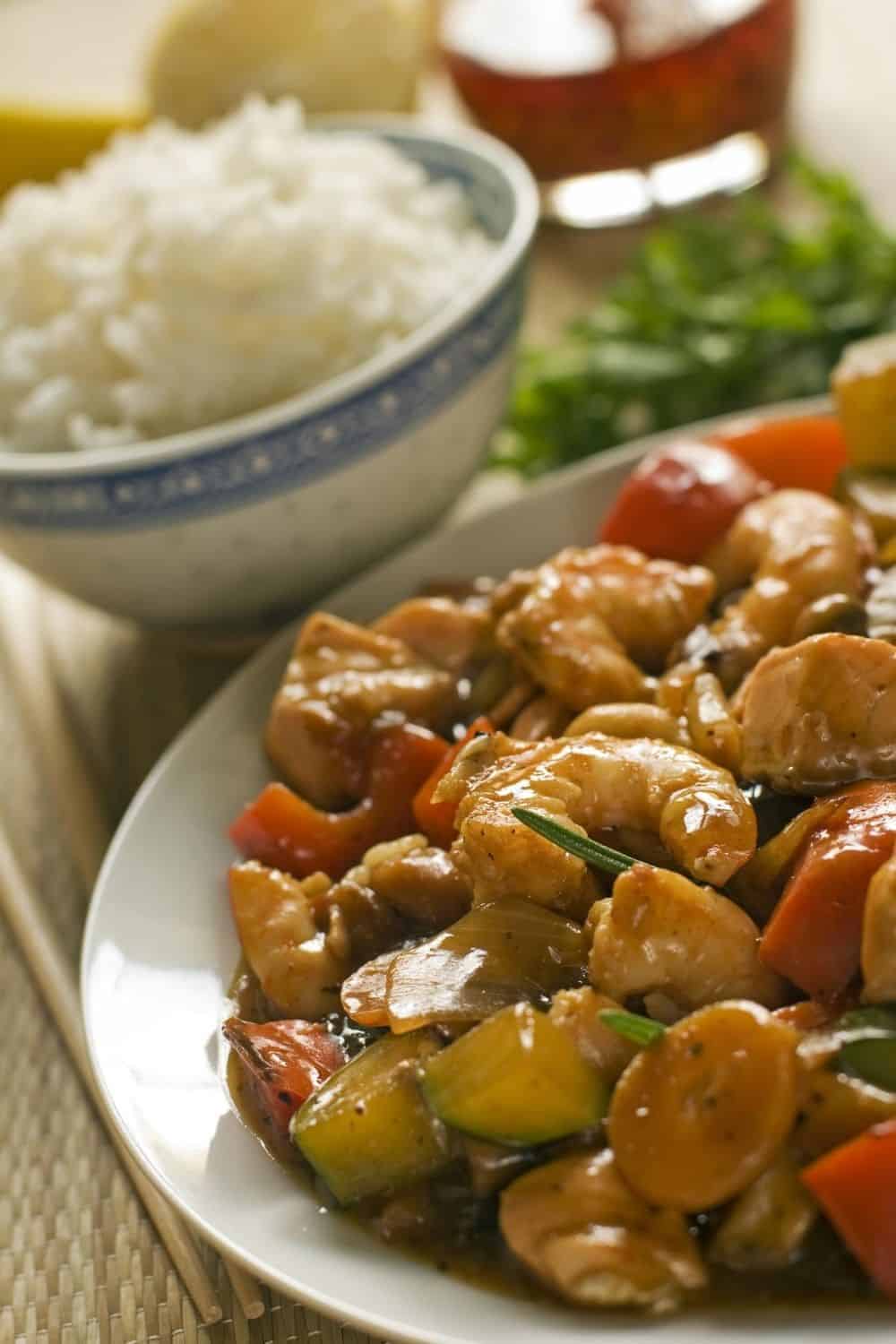 What is chop suey sauce made of?

The sauce is basically broth, cornstarch, plus oyster and soy sauce. For this very reason, the chop suey sauce is very savory.

The sauce of chop suey also has a relatively thicker consistency.

What’s the difference between chow mein and chop suey?

Now, onto the differences between chow mein and chop suey. To truly understand these dishes, it’s best to look at their histories.

One of their main differences is that chow mein is considered more authentic as opposed to chop suey, because its history can be traced back to China itself.

However, it shall be noted that its variations you see in Chinese takeouts have already been altered to suit the Western palate.

Meanwhile, chop suey is already more of an American-Chinese invention.

One common belief shared by many people is that chop suey was created by a Chinese-American tsa sui  which means broken pieces in Mandarin.

It has been modified to chop suey but there is no dish called tsa sui in China.

Now, that we have discussed the history, let’s discuss the preparation of the dish. These two dishes are both stir-fried, however, given that chow mein is more of a traditional dish with noodles.

Meanwhile, chop suey does not really come with a restricted recipe. Chop suey is very adaptable, given whatever vegetables or ingredients you have at home.

And now that I mentioned ingredient, the number one thing you shall take note of is that chow mein is a noodle dish while chop suey is a vegetable dish that can be served over rice.

Considering that chop suey is a vegetable dish, I’d definitely say that it is chop suey that has fewer carbs because it isn’t made with fried noodles.

If you also want to drop weight, then I can suggest that you drop the rice when eating chop suey and just eat it on its own. However, let me just warn you that chop suey is really delicious eaten with rice. 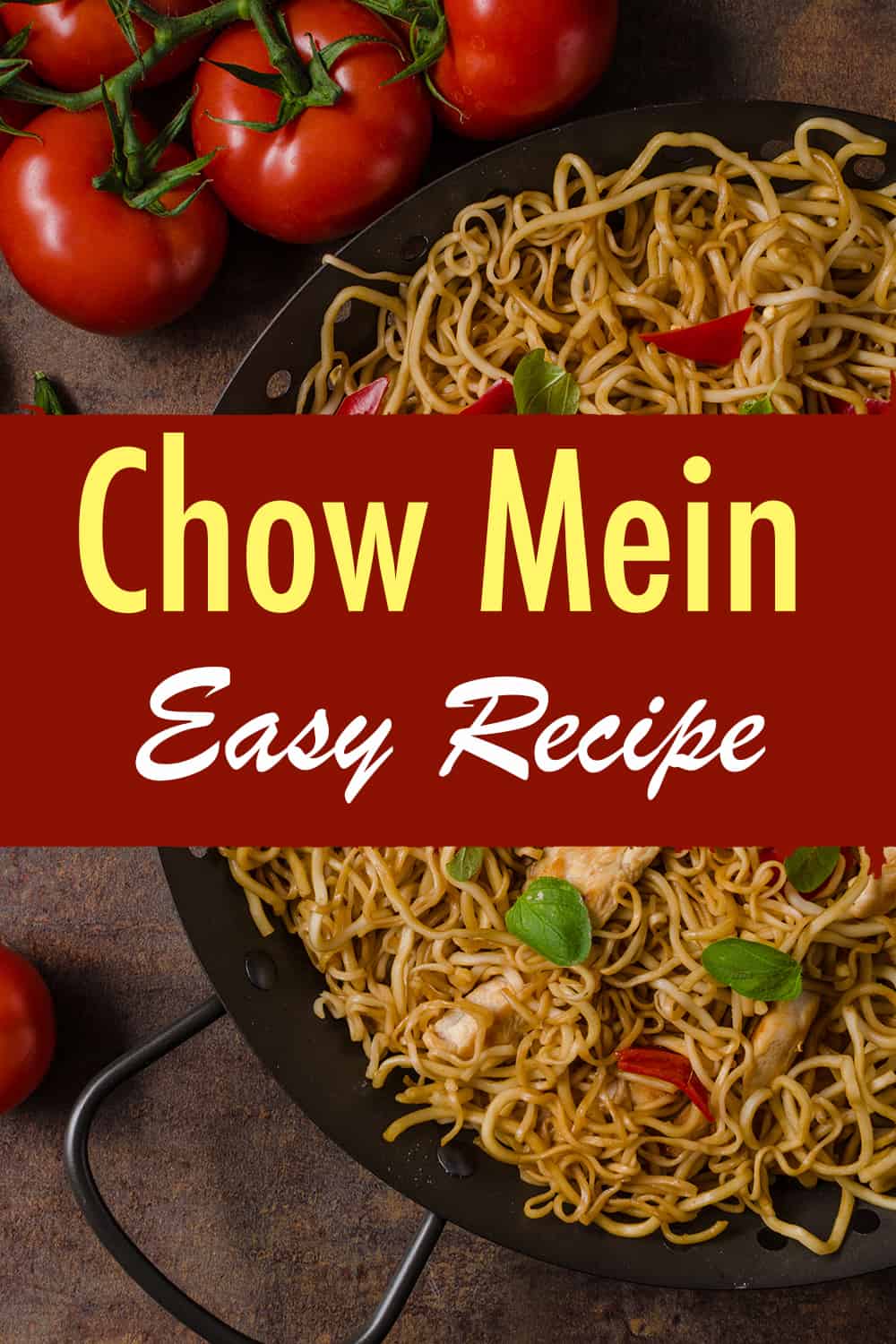 How to make chow mein?

It’s time out to bring your trusty sturdy wok. If you have none of this, then you know it’s time to go make a new purchase.

This wok, in particular, is definitely worth the buy with its carbon steel material. It is also used by many Chinese professionals.

There’s no doubt that Chinese meal you’re preparing is gonna be good.

Beautiful, isn’t it? Serve and enjoy while hot! 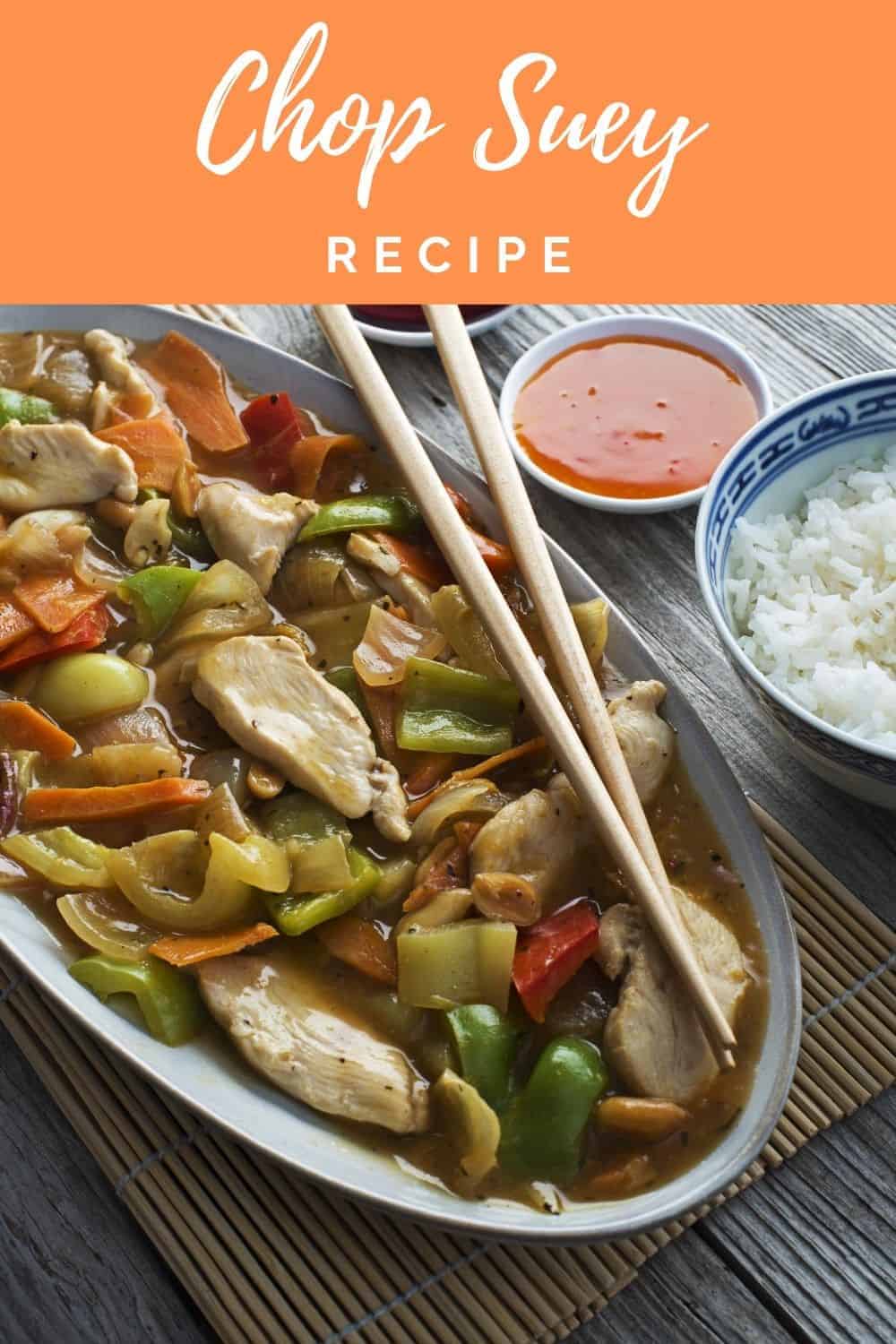 How to make chop suey?

It’s time out to bring your trusty sturdy wok. If you have none of this, then you know it’s time to go make a new purchase. This wok, in particular, is definitely worth the buy with its carbon steel material.

It is also used by many Chinese professionals. There’s no doubt that Chinese meal you’re preparing is gonna be good.

Chinese cuisine definitely is one of the very best. These two dishes, specifically, regardless of differences, bring you right back to home with their not-so-complex but nonetheless amazing flavor.

The one is a noodle dish and the other is a vegetable dish but either way you really can’t go wrong—unless you want the low-carb option than the chop suey is the better choice. Happy Chinese cooking!

There you have it, folks! I hope you enjoyed this article. Should you have any other comments or suggestions, please do not hesitate to leave them down below. I’ll see you on the next article!

What Is Broccolini? (broccolini vs broccoli)
What is jicama?
How to toast coconut (3 stress-free ways!)
How to Store Rice to Keep It Fresh
What is pink lemonade?
How to Freeze Lemongrass Throughout the Year
How to Store Mangoes in 3 Easy Ways
Does Flour Go Bad? Things You Need To Know.
How to Reheat Your Hamburger 4 Different Ways
What is escarole and how to store one?
What Does Coconut Water Taste Like? How Is It Different Than Coconut Milk?
Here Is How to Fix Too Much Garlic in a Dish
Click here to cancel reply.