Cinnamon rolls are ethereal! I repeat, they are simply ethereal!

Imagine that deliciously warm and hearty whiff of freshly-baked cinnamon and bread coming from your oven and spreading warmth and goodness in your home!

Surely, there’s nothing better than that, except for taking a bite into the super fresh, gooey, and sweet cinnamon rolls!

The intricate taste of cinnamon rolls never fails to lift my mood, and I especially adore the mouthwatering cream cheese glaze on top.

Given my love for them, I often end up making a huge batch of cinnamon rolls over the weekend so that I can enjoy them all through the week.

With that said, even though fresh cinnamon rolls are a godsend, then do tend to dry out pretty quickly. Whether you put them in the fridge or freezer or store them at room temperature, they will dry out.

However, the trick is to reheat them in the right way so that you can enjoy soft and moist cinnamon rolls that taste just as good as freshly-baked ones.

Read on to find out how to reheat cinnamon rolls so that they taste as delicious and gooey as their freshly-prepared counterparts!

Can You Make Cinnamon Rolls in Advance?

Yes, absolutely! You can make cinnamon rolls in advance. Simply reheat them for a busy brunch or an early breakfast.

If you want to prepare them a day or two in advance, then it’s best to refrigerate the cinnamon rolls. This way, whenever you need to use them, just take them out of the fridge and bake them again.

However, if you want to make them quite a few days in advance, then your freezer is your best friend.

The trick is to let the freshly-prepared cinnamon rolls cool completely before you store them in your freezer.

This will prevent freezer burn. When you want to serve the rolls, just take them out of the freezer and let them thaw at room temperature overnight before reheating them.

Can You Reheat Cinnamon Rolls?

As suggested above, you can surely reheat already-prepared and even leftover cinnamon rolls. The trick is to make sure that they don’t dry out and become chewy or too hard.

Just follow the right method to reheat cinnamon rolls so that they become moist and soft.

If you want your reheated cinnamon rolls to be delectably moist, then make sure to store them properly.

Here are some tips that you can use to store cinnamon rolls: 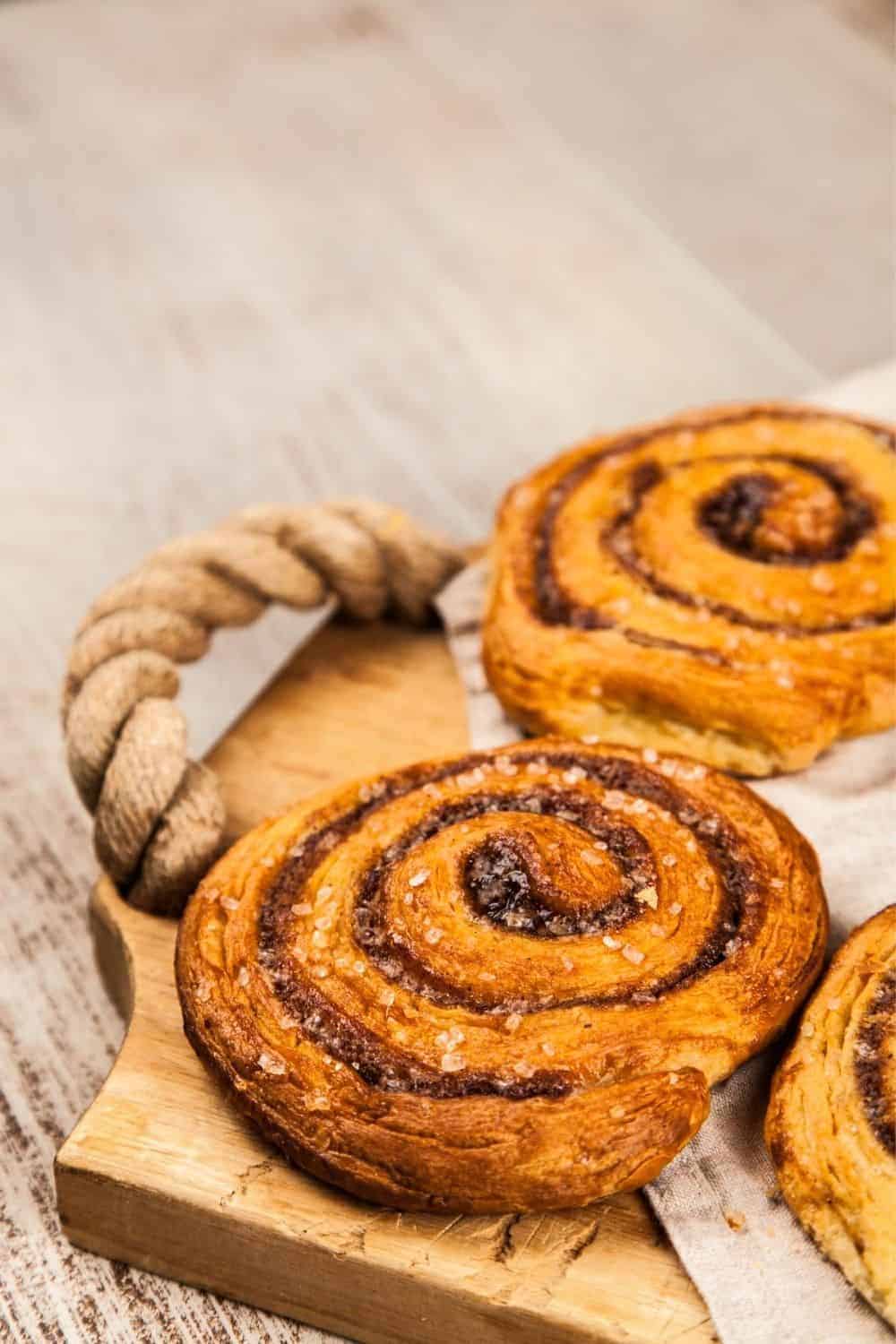 How Do You Reheat Cinnamon Rolls

There are two ways in which you can reheat leftover cinnamon rolls. You can either reheat them in the oven or the microwave.

Whichever reheating method you choose depends entirely on how much time you have and your personal preference.

So, let’s take a look at the two reheating methods in detail.

Reheating in the Oven

This is hands down my favorite way of reheating cinnamon rolls as the reheated rolls are deliciously moist and gooey.

However, it does take more time than simply microwaving them. So, here’s how to reheat cinnamon rolls in an oven:

Reheating in the Microwave

If you’re in a time crunch, then there’s no better way to reheat cinnamon rolls than in the microwave. It hardly takes about a minute or even less to reheat delicious and warm cinnamon rolls.

With that said, microwaving the cinnamon rolls can make them soggy, which isn’t something that you want.

So, make sure that you don’t microwave them for too long.

Here’s how to reheat cinnamon rolls in a microwave:

Pro Tip: A neat trick is to put a microwave-safe cup containing water in your microwave and heat it thoroughly before putting the rolls in the microwave.

Then, put the cinnamon rolls in the microwave next to the cup of water. The steam from the hot water will soften the rolls just enough so that they aren’t too dry or too soggy.

How Do You Reheat Cinnamon Rolls Without Drying Them Out?

Here are some things that you need to remember to make sure that the reheated cinnamon rolls aren’t dry: 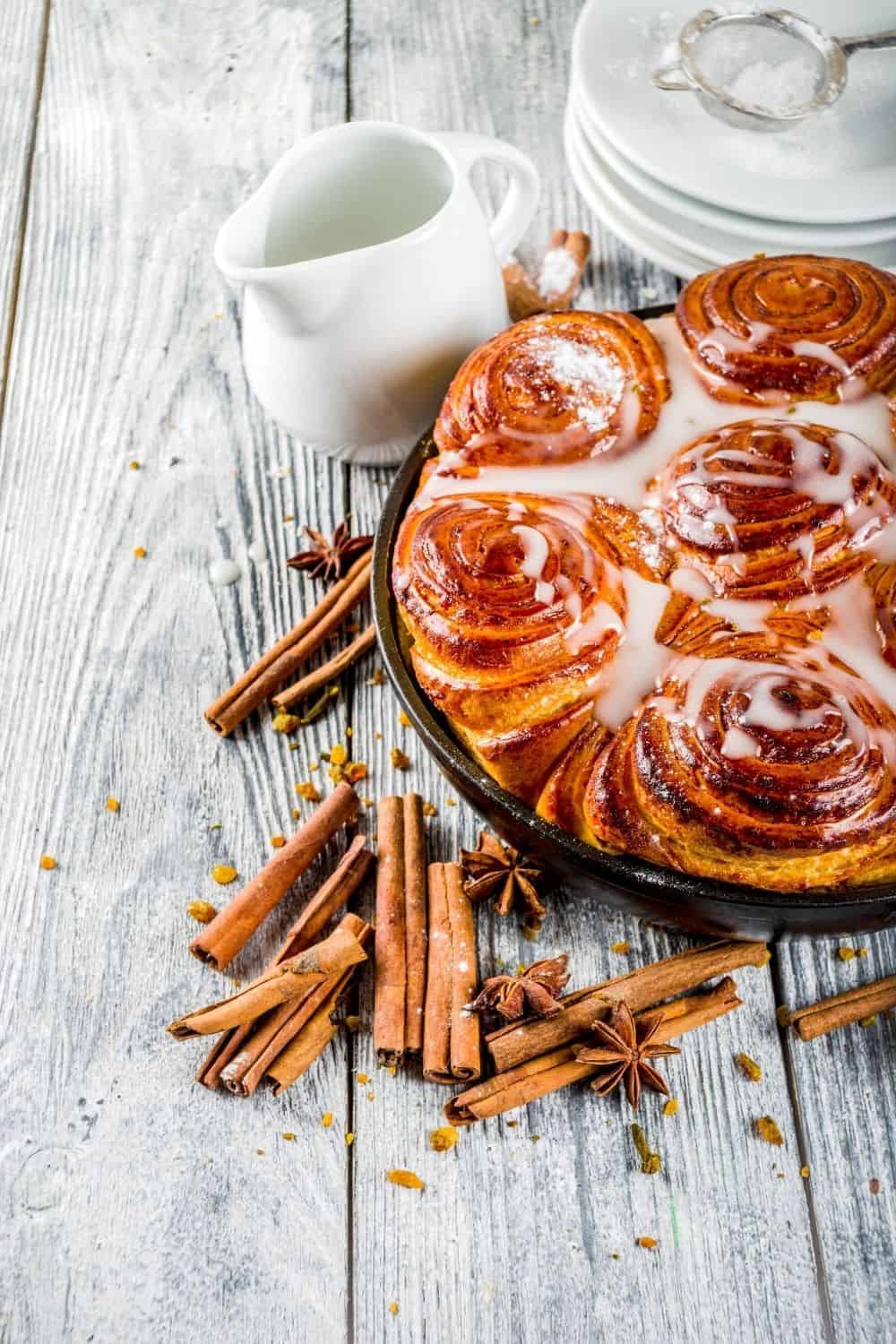 It will take quite some time, but the reheated cinnamon rolls will be well worth the wait.

However, if you’re short on time and need to serve the rolls as quickly as possible, then reheat them in the microwave.

Just make sure that you don’t overheat them or they’ll become too soggy and unpalatable.

Additionally, make sure to store the freshly-prepared cinnamon rolls properly to keep them from becoming dry. Follow the tips that I’ve mentioned above to reheat cinnamon rolls that are soft and gooey.

You are the epitome of what is wrong with online recipes. I hate you.