Have you ever heard the phrase, “baking is an exact science”?

It’s not meant to scare off first-time bakers, but rather, serves as a reminder that, unlike cooking, following the recipe precisely is much more important when it comes to baking.

For cooking, there’s always a little bit of wiggle room when it comes to substitutions and measurements because you can tweak the recipe here and there to fit your taste.

If you want the final dish to be a little spicier, you can add a bit more chili than the recipe calls for, or if you want it creamier, you can substitute milk or cream for water.

The final taste, texture, and even appearance of the dish won’t be affected in any negative way, as long as you don’t deviate too far from the original recipe.

Also, with cooking, you can generally taste and tweak the recipe as you go along.

Unfortunately, there’s not much wiggle room when it comes to baking.

When you try to deviate too far from the recipe in terms of measurements and ingredient substitutions, you might end up with a final baked product that’s a far cry from the intended outcome, especially if you don’t know what you’re doing.

What’s more, it’s not really a good idea (or even possible) to taste baked items in the middle of the process! 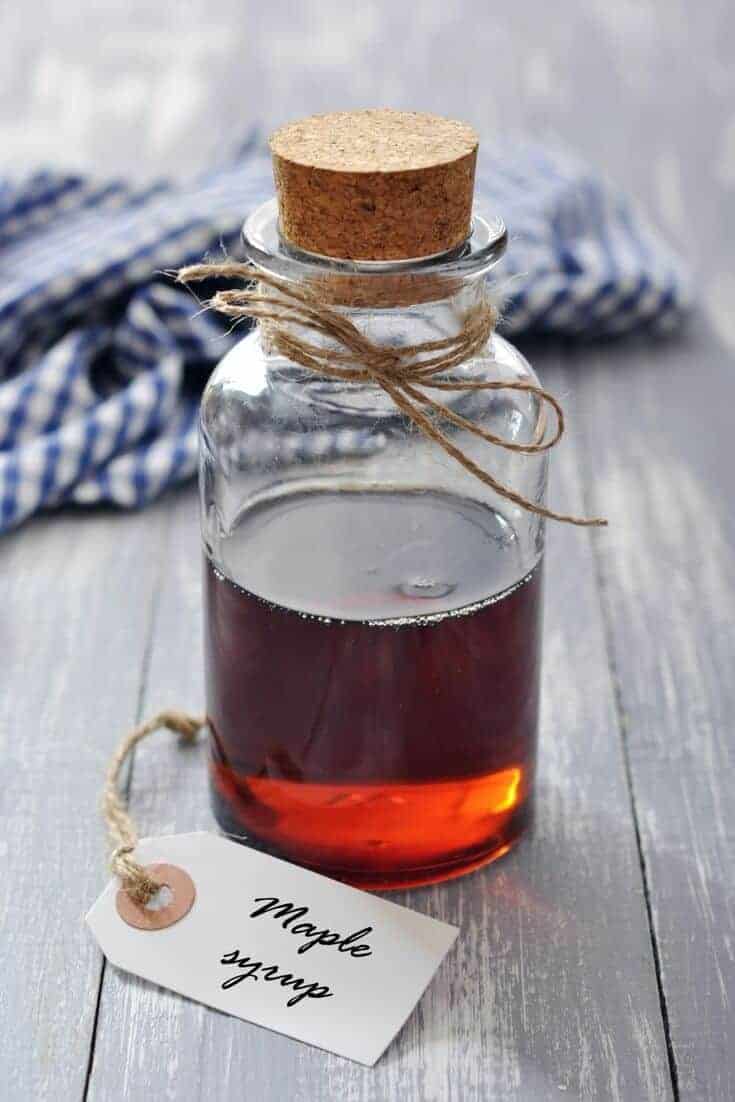 The Curious Case of Maple Syrup as a Baking Ingredient

Most baked recipes call for a sweetening agent, and every now and again, you’ll come across a recipe that calls for maple syrup.

Maple syrup has a distinct taste profile that will give notes of wood and toffee to your baked goods, as well as a deep, gorgeous caramel color.

The problem is that real maple syrup can be hard to find (unless you’re living in Canuck country, which in that case, go Toronto Maple Leafs!), and even in the USA, it can be difficult to source real maple syrup for your baked recipes.

What’s more, there was an interesting study by the Washington Post that found that Americans actually prefer the taste of “fake” maple syrup over real maple syrup.

You might be asking yourself a couple of questions at this point.

“Do I need to use real maple syrup for baking?”, and “What can I use in place of maple syrup?”

Let’s first tackle, what is “real” maple syrup? Real maple syrup comes from the sap of maple trees. The sap is boiled down until most of the water is removed, resulting in a thick, dark syrup.

“Fake” maple syrup, on the other hand, usually refers to products such as pancake syrup or table syrup.

Think of brands that you commonly see on the breakfast table, like Aunt Jemima, Log Cabin, or Hungry Jack.

These products are generally made from high-fructose corn syrup and are flavored and colored to mimic maple syrup.

However, you shouldn’t confuse “fake” maple syrup with “counterfeit” maple syrup. With the former, you know exactly what you’re buying; it looks and tastes similar to maple syrup, but it’s not real maple syrup.

With the latter, you’re getting tricked into buying a product that you think is genuine maple syrup, but it’s pretty much colored high-fructose corn syrup as well.

Basically, you’re getting scammed into paying the price of real maple syrup, which is more expensive compared to table syrups, but you’re only getting table syrup in return.

What Happens if I Don’t Use Real Maple Syrup?

If you don’t have real maple syrup at hand, it’s not really a bad thing. It might alter the taste, color, and texture of the final product a little bit, but you’ll still get a great-tasting baked goodie in the end.

So what if you don’t have real maple syrup on hand?

If you have molasses available, this is arguably the best substitute for molasses because of the similar color, texture, and flavor profile that molasses has in relation to real maple syrup.Our suggested ratio: 1 cup of molasses to 1 cup of maple syrup

While honey is more readily available compared to maple syrup, it can also be a bit pricey.

Our suggested ratio: 1 cup of honey + ½ cup of brown sugar (to increase sweetness, depth of flavor, and intensify color) to ¾ cup of maple syrup

Corn syrup is a popular alternative to maple syrup because it’s cheap and readily available in most supermarkets.

It has a similar consistency but does not have the color or depth of sweetness that maple syrup has, so keep that in mind.

Our suggested ratio: 1 cup of corn syrup to 1 cup of maple syrup

Whether you’re using white granulated sugar or brown sugar, it can be a difficult maple syrup alternative to work with for several reasons.

First, sugar isn’t as sweet as maple syrup. Second, the consistency would be different since sugar is solid.

Hence, you would generally need to dissolve the sugar with water before using it in your recipe.

You can find powder or extract maple flavoring in many specialty baking shops. Since this is also a solid product, you need to dissolve it in water before you can use it in your recipe.

However, using dehydrated maple flavoring ingredients will give you that distinct maple flavor in your final product.

As most pancake or table syrups are made from high-fructose corn syrup, you can use the same ratio as plain corn syrup. 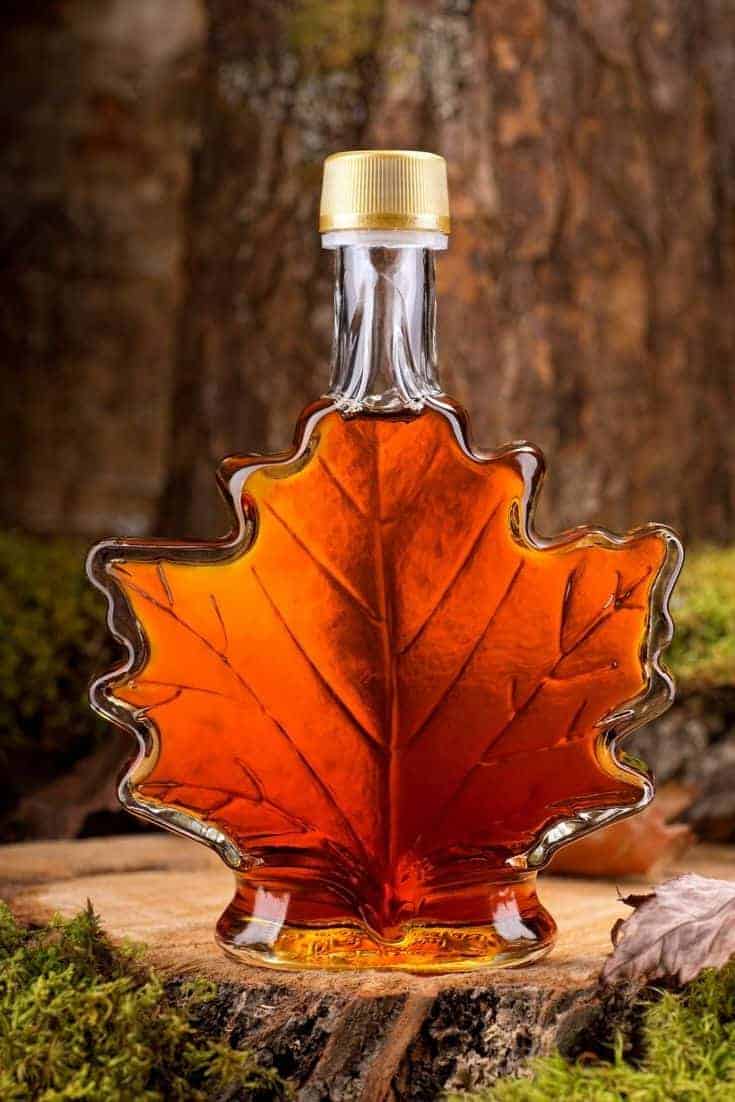 Can I DIY a Maple Syrup Substitute at Home?

Yes, you can create your own maple syrup alternative at home using simple ingredients you probably already have in your pantry!

Use this easy recipe as a baking ingredient, or even poured over your favorite breakfast items in place of store-bought pancake syrups.

The best thing about making a maple syrup substitute at home?

You’ll never have to worry about rushing to the store to find maple syrup again!

1. In a small saucepan, place water and allow to boil.
2. Once water is boiling, add all other ingredients and stir lightly.
3. Bring to a boil, then lower temperature to a simmer for 10 minutes.
4. Remove from heat, and allow to cool to room temperature.
5. Serve and enjoy!

Best Fruits That Start With A (Fruits From Around The World 🌎)
The best cardamom substitutes
Muenster: The Good Melting Cheese | FAQ 🫕
Substitute for white wine in cooking - 7 amazing ingredients that should get you covered!
How to ripen pineapple easily and make it delicious
Foods That Start With U
4 queso fresco substitutes that exude that familiar burst of flavor
Out Of Regular Milk? 12 Best Options To Substitute For Milk In Mac And Cheese
6 Honey Substitutes That Can Create Mouthwatering Desserts
What Is a Good Substitute for Thyme?
What’s a Good Allspice Substitute?
What Is a Substitute for Heavy Cream?
Click here to cancel reply.

How much does the recipe for the maple syrup substitute yield? Thank you!