So, you’ve got a lobster and you’re determined to make this the best tasting lobster tail you’ve ever had.

I wouldn’t blame you either—this exquisite tasting seafood delicacy is expensive, and the last thing you want is to mess it up.

When trying to figure out how to cook lobster tail, you might start doubting your abilities and wonder if you’re well equipped.

I used to think you have to be a professional chef in order to get this right, because it does look difficult.

However, it wasn’t until a few years ago that I realized cooking lobster doesn’t have to be complicated just because it’s pricey.

So, here are some fairly simple methods to cook lobster at home. 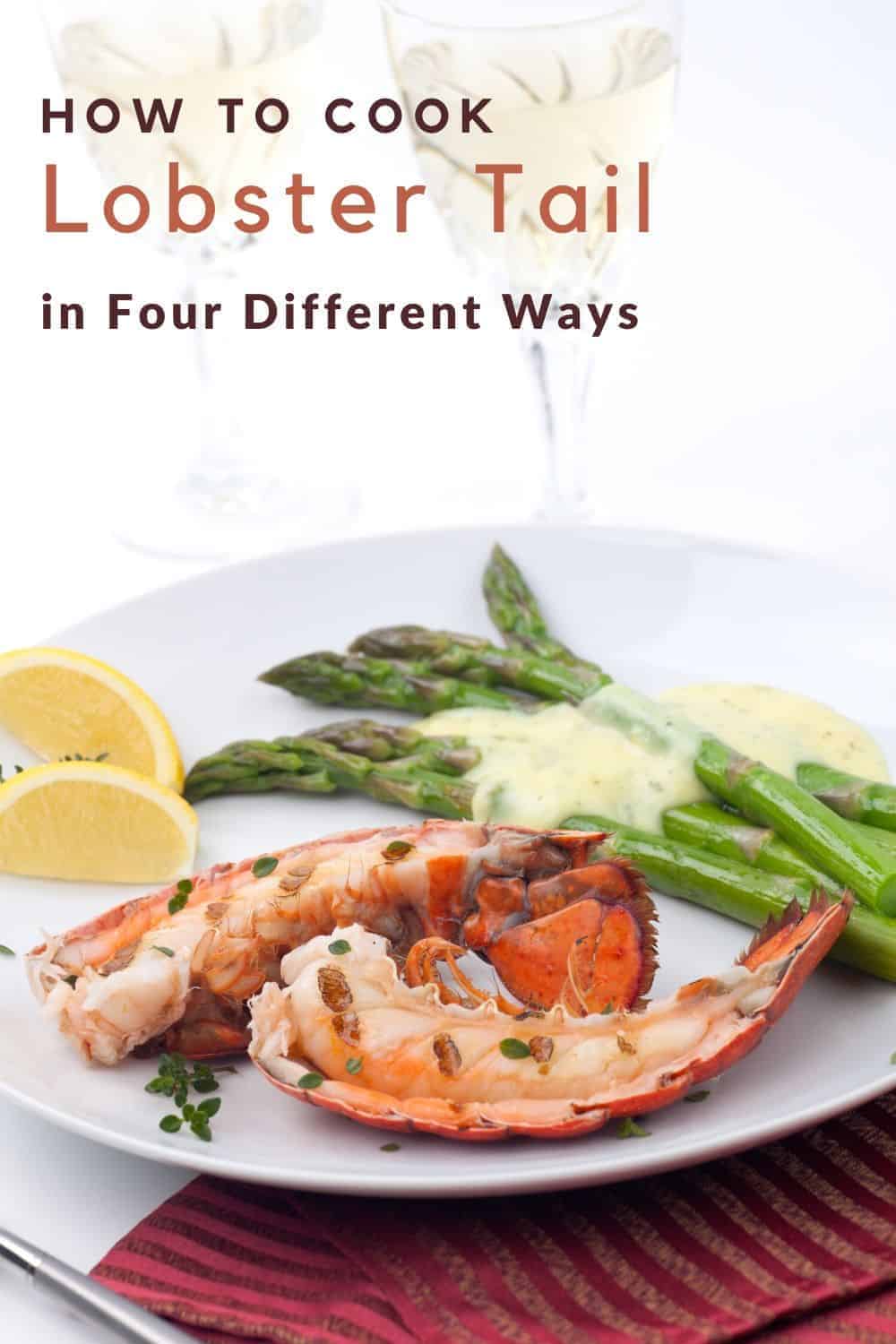 How To Cook Lobster Tail

There are four main ways of cooking lobster. You can steam, boil, bake or grill them, and they’ll taste amazing no matter which method you choose.

Most people prefer leaving the lobster in the tail and then taking out the meat once it’s done cooking.

Before any method, use kitchen shears to cut the shells and take out the vein that runs down the middle. Don’t cut the meat or the fan of the tail, just the outer shell all the way to the fin.

To get the vein out, you might need to pry open the shell with your hands after cutting it with the shears.

How to Pick Out Lobster Tails

The most commonly consumed lobster tails are from spiny lobsters. They’re better because they have more meat than Maine lobsters.

They’re generally referred to as rock lobster tails and can be bought frozen or fresh. Pick out one 8-ounce tail for every person you’re planning to serve.

Don’t get confused by the bluish, green or brown hue of the tails, or the spots on the shells.

The bright red color you’re accustomed to seeing only appears once the lobster is cooked.

How To Season Lobster Tail

Because lobster tastes pretty great on its own, the most I do when it comes to seasoning is a sprinkle of salt and pepper.

I also like squeezing some lemon on the tails once they’re cooked. As always, brushing on some butter is an easy way to spruce up the flavor, and you can almost never go wrong with it.

Can You Overcook Lobster?

It’s very difficult to overcook lobster, because it gives off a clear warning when it has been properly cooked.

The shell will turn bright red, indicating that it’s ready to be taken off the stove or out of the oven.

Just make sure the meat has turned white or opaque and is tender to touch. If you’ve undercooked it, the meat might still be mushy.

How to Serve Lobster

Most people prefer serving lobster brushed with melted butter and a few squeezes of lemon. You can also throw in some parsley.

Because of the unique flavor of lobster, it tastes amazing on its own as well.

How To Store Lobster Tail

You can store raw, fresh lobster tail in the fridge for a maximum of 4 days, with 2 days as a safer estimate.

Just keep it in a Ziploc bag or container and throw some ice in with it as well. Then, place it in the coldest part of your fridge, which is usually the back.

Hopefully, these methods will make it easier for you to decide how you want to go about cooking your lobster tail.

Remember—this delicacy is known for its flavor, so it’s hard to go wrong if you’re making this to impress your family and friends!

How to poach eggs for dummies
How to cut a cantaloupe in two different ways
How to slice a tomato? (The perfectly easy way)
How To Dice A Tomato In 5 Easy Steps
How to massage kale in 5 minutes
How to julienne a carrot
How to boil a chicken for shredding
How to cook corn on the cob: 3 simple methods
How to beat egg whites to stiff peaks
How to thicken chili in 4 different ways
Baking soda vs. baking powder – Is there a difference?
How to cut cauliflower in two easy ways
Click here to cancel reply.