Like most people, we’ve always believed that soups were firmly in the realm of appetizers. After all, there must be a reason why they’re always under appetizers in menus, right?

Of course, that was before we made this incredibly delicious and spicy sausage and potato soup.

Yes, you read that right: a soup that features potatoes AND sausages!

No, this isn’t your ordinary chowder, which is how most people are familiar when it comes to having potatoes in their soup. In fact, you might be surprised to learn that this hearty and filling soup doesn’t use any cream at all!

Well, read on to learn how to make a delicious potato soup featuring chunks of sausage and crispy pancetta because OF COURSE potatoes and meat are the perfect pairing even when it comes to soup. 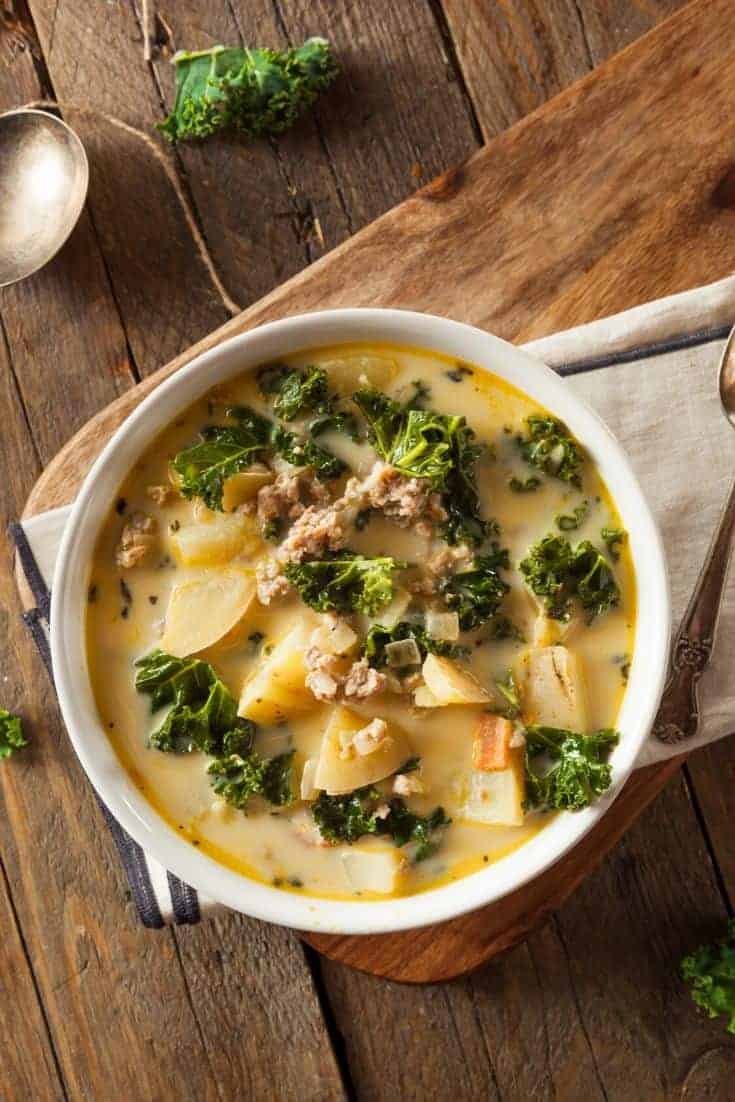 What is the difference between pancetta and bacon?

A lot of people tend to confuse pancetta with bacon and it’s perfectly understandable given that both of these cuts of meat come from pork belly. However, it’s in the way that they are prepared that makes the difference.

Bacon is traditionally brined and smoked which produces that salty and smoky flavor that you love in bacon.

Pancetta, on the other hand, is cured in salt and pepper, rolled up tightly, and allowed to age for up to 4 weeks, depending on the level of saltiness desired. Traditionally, pancetta is not smoked.

What can I use instead of pancetta?

We get it, pancetta can be hard to find and it’s kind of pricey. It’s not always practical to get pancetta for recipes so you might need to use a substitute now and again.

The best substitutes for pancetta need that same salty, porky goodness and that same delicious crispness. American bacon is first on the list, but you can also use Canadian bacon, prosciutto, salt pork, or smoked ham.

Basically, you want thin, cured slices of salty pork that you can get crispy on your stovetop or in your oven to get that best substitutes for pancetta.

What is Parmesan cheese rind?

The Parmesan cheese rind is that hard, almost leathery piece that functions as the outer covering of a round of authentic Parmesan cheese. While it’s not possible to eat the rind, you can absolutely use it for cooking!

The rind is where the flavors of the Parmesan cheese are concentrated so you can use it in stocks and soups to add a flavor punch!

The rind itself won’t melt but it will soften. After cooking the dish, simply pluck out the rind before serving. You’ll notice that your soup or stock now has an incredibly deep flavor!

Can you freeze potato soup?

While you can technically freeze potato soup, it’s not really advisable to do so. When you freeze potato soup and reheat it after, the potatoes will have a mushy and gummy texture that makes the dish unappetizing to eat.

How long does potato soup last?

Homemade potato soups, especially those with dairy in it like this one, will last 3-4 days in the fridge.

How do you thicken potato soup?

You can thicken potato soup by adding thickeners such as flour, cornstarch, or by making a roux. You can also thicken the soup by pureeing some of the potato and adding it directly to the soup while cooking.

In this recipe, however, the pureed beans will work as the thickener due to the starch in the beans. What’s more, potato soup tends to become thicker as it cools so don’t add too much of the thickener or you could end up with watery mashed potatoes and beans instead of soup!

Should you peel potatoes for potato soup?

Yes, you should peel potatoes for potato soup. Even if you’re pureeing the potatoes, the skin will not break down completely and you’ll end up with bits of skin in the soup.

What to serve with soup?

This recipe for potato soup is already quite filling by itself, but you can still serve it with sides such as a salad or bread. We love making homemade cornbread to serve with soup, and a spicy Jalapeño cornbread sounds perfect!

If you have any cornbread leftovers, you can easily store it for a quick snack.

If you’re looking for something lighter, you can pair this soup with a quick salad such as this simple Arugula salad or this delicious roasted pear salad. 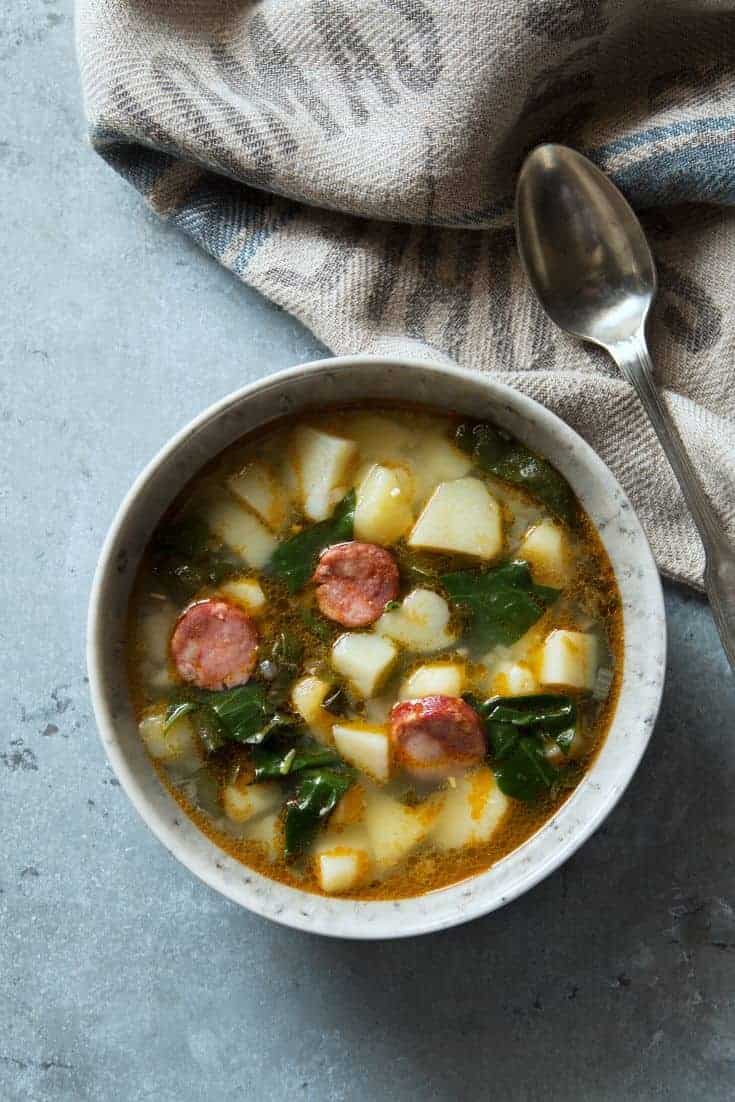 The key to having a delicious soup is making sure all the ingredients cook evenly. Take the time to cut the potatoes to the same size so that they cook at the same time. No one wants to bite into a big chunk of half-cooked potato, or worse, puree raw potato into their soup. That just tastes nasty!

2. Switch out half and half for low-fat milk

If you want to cut down on the calories a little bit on this dish, you can substitute half and half for low-fat milk. You’ll get a lighter soup with less fat, but without sacrificing any flavor!

3. Brown the potatoes. Trust us.

Soup as a main course? Yes, please! This delicious and filling soup is substantial enough to be served as an entrée. The sausage, pancetta, and spices pack a LOT of flavors, and the potato gives it that perfect mouthfeel to make for a satisfying bite every time.

It’s perfect for dinner during a cold, gloomy night because it satisfies both your tummy AND warms you down to your bones.

Make the Potato Soup Ahead of Time!

Potato soup is one of those soups that taste better if given a little bit of time for the flavors to really melt together. Slow cooking the soup is a good option, but you can make the soup a day ahead and serve it the next day to let the flavors intensify.

Add Some of the Green Stuff

You can add a few herbs to make this soup even more flavorful! Add some finely chopped parsley or basil right before serving to give it a little bit of freshness.

Who doesn’t love soup with garlic bread? Get a fresh baguette, slice it up, spread some butter, sprinkle on some crushed garlic, and bake in the oven at 400⁰F for 7 minutes.

If you’ve got any spare potatoes in your pantry that’s been hanging around for some time and you’ve never really known what to do with them, this delicious potato soup is exactly what you’ve been looking for!