Hot toddy is a popular cocktail that’s enjoyed during the winter. It helps you stay warm and it’s incredibly easy to make. All you need is whiskey, honey, lemon, and hot water to prepare a steaming cup of hot toddy when you’re feeling a little under the weather.

I personally enjoy my hot toddy with black tea instead of water, but you can change up the ingredients to your liking as long as the flavors remain light and hydrating.

In this blog post, we’ll take a look at the history of hot toddy and 3 variations you can try making at home.

What Goes in a Hot Toddy?

The hot toddy, also known as ‘hot whiskey’ in Ireland is a cocktail that’s typically served hot, hence the name.

The origin of hot toddy can be traced backed to British-occupied India. The name comes from the Hindi word ‘taddy’ which translates to ‘a beverage made from fermented palm sap’. In 1786, hot toddy was officially defined as a beverage made with alcoholic liquor, sugar, hot water, and spices.

The British then took the beverage home and decided to claim it as their own. It became a popular cocktail in Northern England and Scotland that was enjoyed during colder months. Pub-goes started asking for hot water and spices to be added into their Scotch whiskey.

Some people believe that the recipe for hot toddy was invented by an Irish doctor, by the name of Robert Bentley ‘Todd’, who used to tell his patients to drink hot brandy, sugar water, and cinnamon as a prescription.

Even though there’s a lot of dispute surrounding where hot toddy truly got its origin, it’s safe to say that this drink has safely made its way to America and has undergone many variations that you can experiment with to find one that perfectly suits your taste buds.

The classic hot toddy recipe. It’s incredibly simple and takes only a handful of ingredients you can easily find in your kitchen.

Here’s another variation that you definitely wouldn’t want to miss out.  It involves switching up the flavor of your traditional hot toddy by adding in a shot of ginger liqueur.

If you’re not keen on adding alcohol to your hot toddy, this is the recipe for you. It’s a lot like a warm cup of tea, except it has a more enhanced flavor. You can share it with the kids as well when they have the flu.

Watch this video to learn the simplest 4-ingredient recipe to make a hot toddy at home. 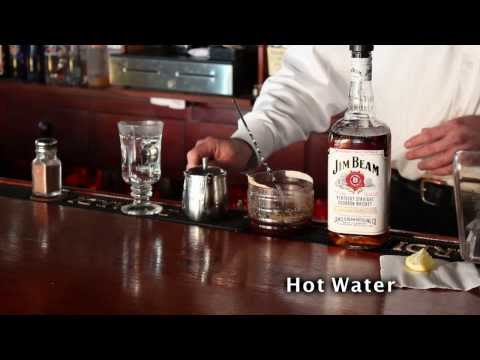 Hot toddy can be made a number of ways and you can switch up the ingredients, according to your preference. As long as your cocktail is hot and keeps you warm, there isn’t much you can do wrong. Here are some ways you can enhance the flavor of a traditional hot toddy:

Even though whiskey is the more popular choice, you can replace it with rye or bourbon for a slight difference in the flavor. You can also try making it with dark/spiced rum or brandy.

You can add a bunch of spices to your hot toddy to introduce a whole new dimension to the simple and classic flavors. These can include nutmeg, start anise, cinnamon, cloves, and ginger.

Instead of honey, you can use maple syrup or agave nectar to switch up the flavor a little. I personally like to sweeten my cocktail by muddling a little bit of brown sugar and lemon juice in the mug before adding the rest of the ingredients.

You could garnish your drink with a lemon wedge and 1 whole cinnamon stick, but some alternatives you can consider are slice of apple, freshly peeled ginger, anise, or whole cloves.

Now that you’ve learned how to make a hot toddy, feel free to put your own spin on the recipe and make it your own. Swap out honey with maple syrup to make it vegan or add a splash of apple cider to enhance the flavor. Experiment with your choice of spices and stay warm throughout the winter.

Enjoyed reading this blog post? Give these variations a try and see for yourself why they’re all the rage in the winter season.

No votes so far! Be the first to rate this post.

Meet Go-Go-Gadget Renee'. Her passion for #kitchen gadgets is matched only by her love for tech. A real #foodie, she's all heart for red wine and delicious meals. #CookingChewTribe

Can You Solve It?

AMAZON ASSOCIATES PROGRAM
CookingChew.com is a participant in the Amazon Services LLC Associates Program, an affiliate advertising program designed to provide a means for sites to earn advertising fees by advertising and linking to Amazon.com. Amazon and the Amazon logo are trademarks of Amazon.com, Inc., or its affiliates. Additionally, CookingChew.com participates in various other affiliate programs, and we sometimes get a commission through purchases made through our links. CookingChew.com does not provide medical advice, diagnosis, or treatment. Any information published on this website or by this brand is not intended as a substitute for medical advice, and you should not take any action before consulting with a healthcare professional.