It is important to beat egg whites to perfection for many recipes.

The idea of beating egg whites daunted me initially until I learned the correct way of doing it.

For most home bakers and cooks, this is usually the most difficult part of baking.

You just gotta learn what it all means.

The fluffy egg whites are useful in making cakes and soufflés rise.

They also give a light and airy texture to waffles and pancakes.

In this article, I will provide you with a guide on how to beat egg whites to soft, firm, and then finally to stiff peaks. 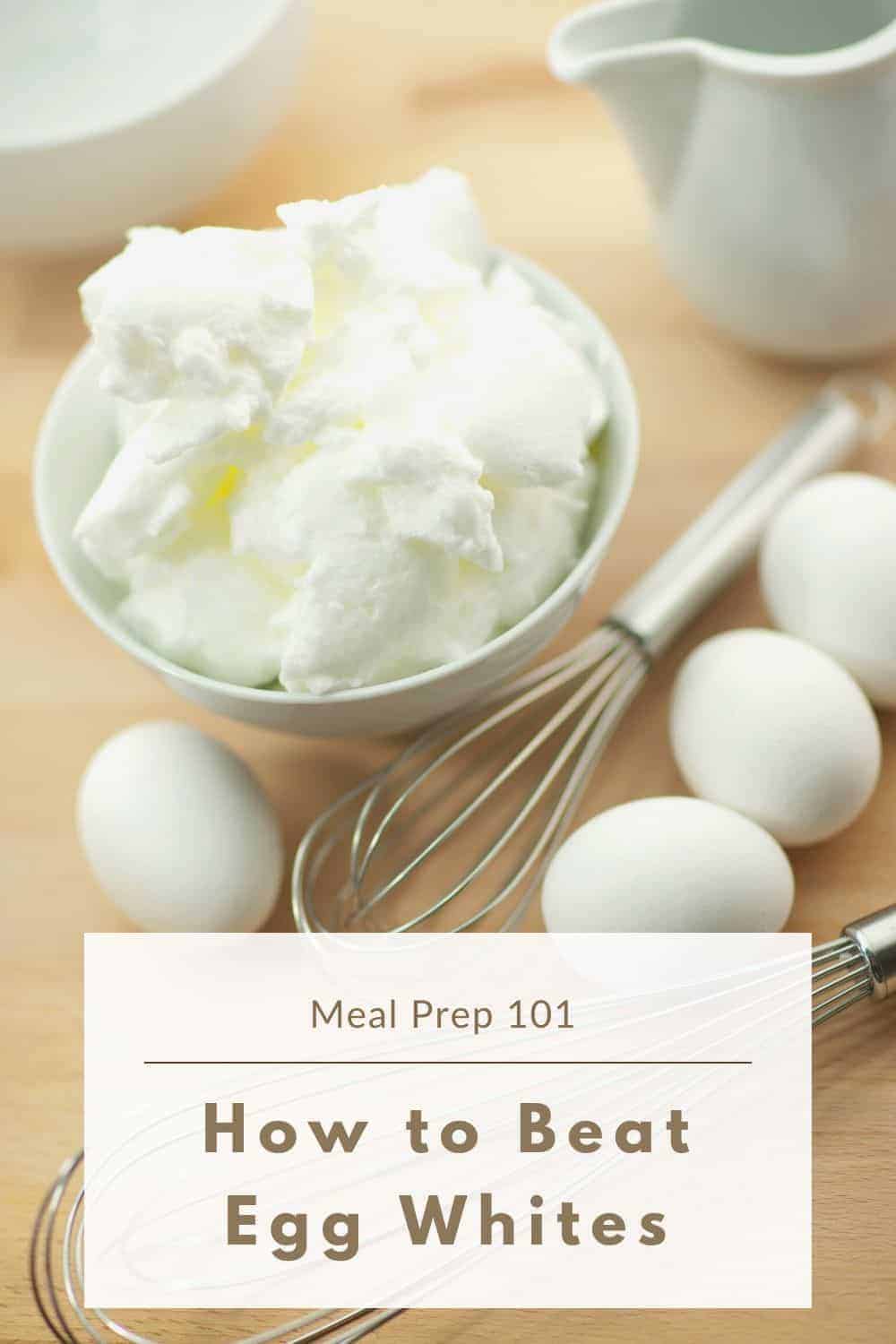 What Happens When You Beat Egg Whites?

As the egg white is mostly water and protein, beating makes the protein in it stretch and create bubbles around the water.

The consistency of egg whites changes as you keep beating them.

You will notice that your egg whites have a foamy texture after beating them for 5 minutes.

If you turn your whisk upside down, you will find that the peaks are just beginning to hold.

The peaks will be soft and fall back into the foamy mixture after a second or two.

Once you have soft peaks, continue beating for another 2-3 minutes.

You will notice that the whipped egg white has firm tips.

Firm tips have so much air that it makes them stand up straight.

When you turn your whisk upside down, the peaks will hold and the ridges will be more apparent.

These firm tips, too, will fall back after a moment.

After you have firm peaks, continue beating for another 5 minutes.

Turn the whisk upside down again and the peaks will hold now.

Stiff egg white peaks will stand straight up without falling back.

The texture of the mixture will also be thick and heavy.

If you continue beating the egg white after you have stiff peaks, it will begin to look grainy and dull.

The peaks will fall back on themselves and the mixture will start becoming thin.

After a few seconds, the mixture will start to separate liquid due to over-beating.

How Long Does It Take to Beat Egg Whites?

The time it takes to beat egg whites varies depending on the type of mixer you use.

Usually, you can reach the maximum volume in 12-18 minutes.

Whipping egg whites for 5 minutes will give you soft peaks.

Whipping for another 10 or more minutes should give you stiff egg whites.

How to Beat Egg Whites

Beating egg whites is one of the basic baking skills.

With the right equipment and little attention, you can whip the egg whites to perfection.

Here is how to nail it!

Before beating egg whites, you should prepare everything so that you don’t have to fetch anything in the middle of it.

You should also ensure that all the equipment is spotlessly clean.

Any fat residue on the beater or bowl will hinder the whites from rising.

Following are some preparation tips that you will need for beating egg whites:

You will need a small mixer bowl to beat up to 3 eggs.

A small mixer bowl allows you to beat air into the egg white properly.

For 4 or more egg whites, you can take a larger mixer bowl.

You should also remember that when you beat egg white, it will increase in volume to 6-8 times.

Your bowl should be large enough to have room for expanding whites.

The bowl should also be deep enough for the beater to come in contact with the whites as much as possible.

You have two options for mixers when it comes to beating egg whites.

The best and easiest option is to use an electric mixer.

You can also use a hand whisk for beating, but it requires more arm strength and a lot of patience.

The fat in the egg yolks prevents egg whites from getting beaten properly.

You should be careful that no yolk gets in the whites while separating them.

First, crack the egg on the rim of the bowl or on the countertop.

Hold the egg over the bowl and gently pull the shell halves apart without pouring the egg into the bowl.

Now, shift the yolk back and forth between the two halves of the shell.

Repeat this several times until almost all egg white has poured into the bowl.

A bonus tip is to separate each egg white into another small bowl before pouring it into the mixer bowl.

You should discard any egg white that has even the tiniest amount of yolk in it.

The most suitable egg temperature for perfect beating is room temperature.

If you have taken out the eggs from the refrigerator, leave them out to warm up for 20 minutes.

The air that you beat into the egg whites can be lost easily.

Cream of tartar is a stabilizing agent which prevents the peaks from falling back into the mixture.

You can also use a few drops of lemon juice or vinegar as alternatives.

Adding sugar to the egg white is optional. Some recipes might require you to mix the sugar with yolk so you can do whichever works for you.

For the best volume and smooth texture, add sugar gradually. Start adding sugar only after you have beaten the whites to foamy texture.

After adding the sugar beat until it has dissolved before adding more.

1. Separate the egg whites from the yolk and let them sit at room temperature for 20-30 minutes.
2. Use an electric mixer on a medium setting to beat egg whites. Beat for 5 minutes until you have soft peaks.
3. Scrape the sides of the bowl with a rubber spatula when you feel it necessary.
4. After you have soft peaks, beat for another 3 minutes for firm peaks.
5. Continue to beat egg whites until the peaks curl when you lift the beater. The whites should be bright white and thick and the peaks should not fall back. For a final test, tip the bowl to make sure that the whites do not slide out.

Whipped egg whites are fragile, so use them as soon as you can.

If you have to fold them in a batter, fold carefully.

You should remember that you have just beaten air into them, so keep as much air as you can in there while folding.

Fold gently with a spatula, instead of stirring everything together.

Beating egg whites need a lot of patience to get perfect stiff peaks.

By following these steps, rest assured that your final dish will have the light fluffiness that you want.

How to poach eggs for dummies
How to thicken BBQ sauce in 3 simple ways
How To Dice A Tomato The Easy Way
How to thicken chili in 4 different ways
How to cut cauliflower in two easy ways
Baking soda vs. baking powder – Is there a difference?
How to cut sweet potatoes (dice, slice, and julienne)
How to cut a cantaloupe in two different ways
How To Dice A Tomato In 5 Easy Steps
18 Griddle Recipes
How to grate zucchini (sayonara sogginess!)
How to cook lobster tail
Click here to cancel reply.

Hi, I'm trying to make a meringue for my macarons with my Kitchen aid stand mixer. How long would it take and what speed settings should I use for each stage?