If you want to find the answer to “what is mochi and what does it taste like?” then I’ve got you covered!

Mochi is a truly exotic Japanese dish that not many people know about! It’s a type of rice cake that can be sweet, plain, or savory.

You can enjoy it as is, wrapped in bamboo leaves or seaweed, dipped in sweet and tangy sauces, and more.

You can also cook it, bake it, fry it, add it to soups and other savory dishes, and use it in various desserts. It truly is a jack-of-all-trades dish that’s a staple in Japanese cuisine.

So, let’s learn everything there is to know about mochi! 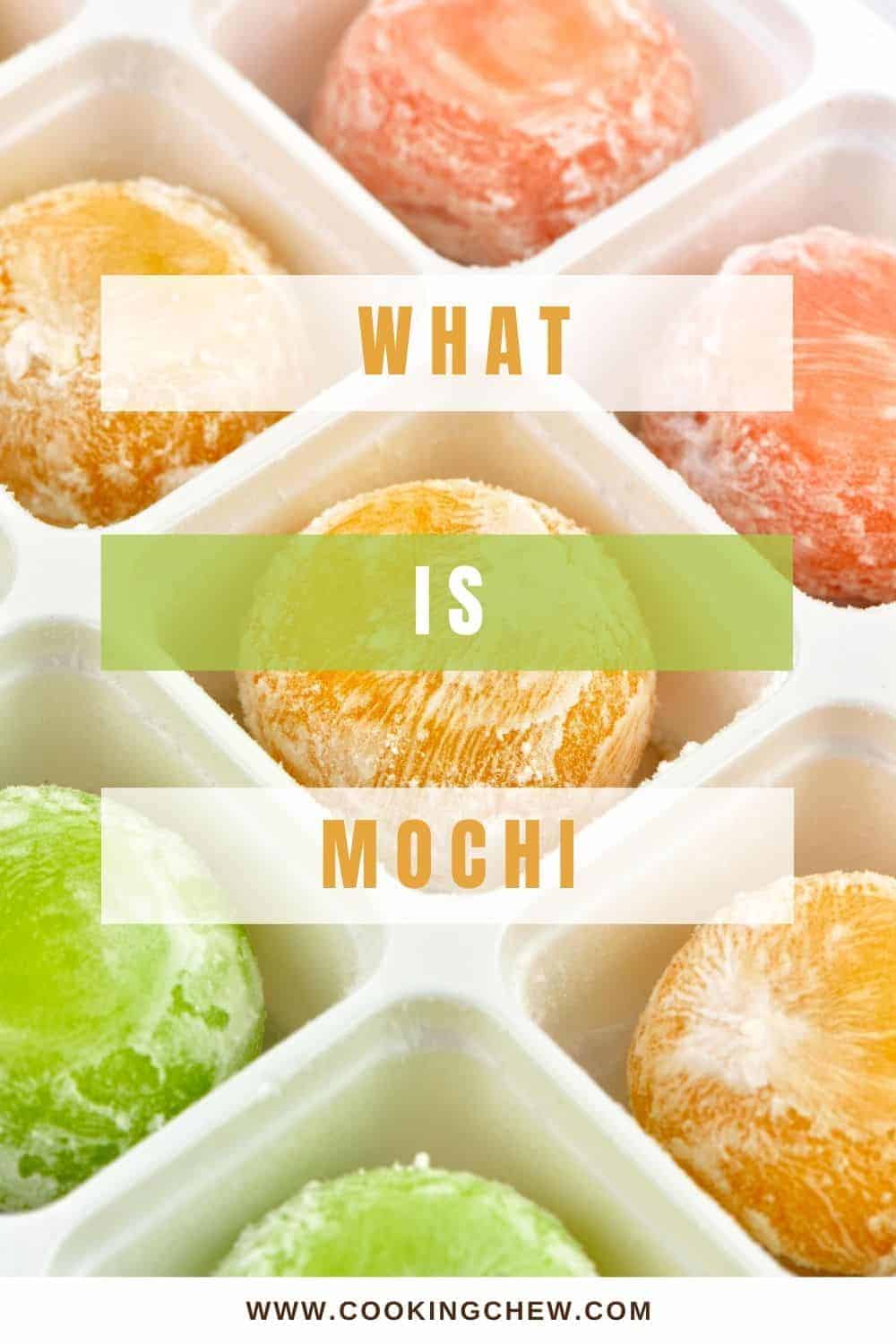 Mochi is an umbrella term that covers all sorts of Japanese rice cakes with a wide array of flavors and styles. Technically, a rice cake is a type of dough that’s made with pounded steamed rice.

Preparing and eating mochi is tied to many vital Japanese traditions, such as the Japanese New Year’s celebration, and is rooted in the deep significance of rice in Japanese culture.

In ancient Japan, mochi was revered as a sacred food since it was believed that it held a divine presence. It was widely eaten as a way to pray for good fortune and health.

Today, mochi is eaten all year round in Japan and is considered a staple in Japanese cuisine.

It’s also available in restaurants that serve Japanese cuisine across the US. Moreover, mochi is an essential ingredient in many Japanese desserts, soups, and hot pot dishes.

You can grill, bake, and even fry mochi. 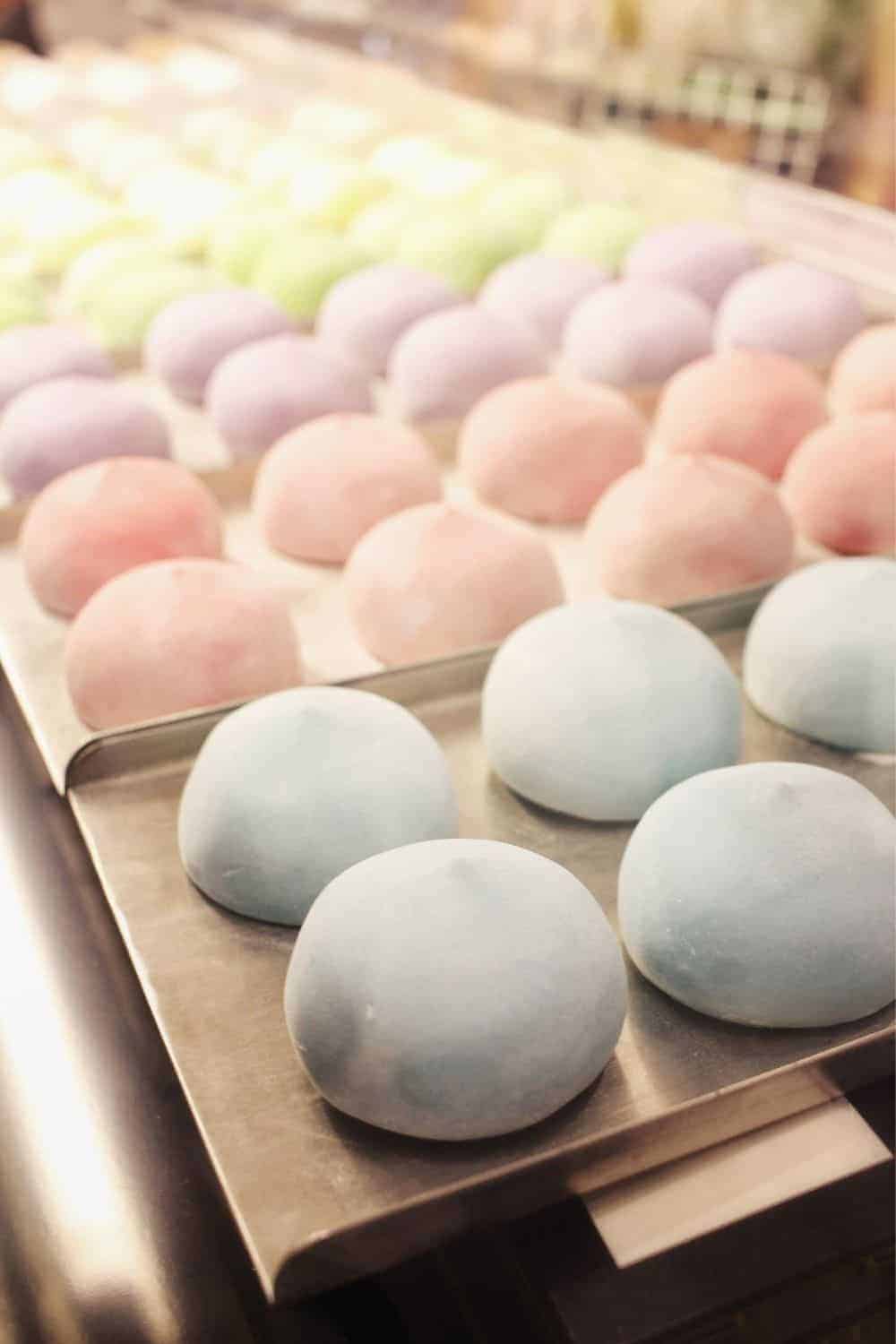 Now that you have the answer to the question “what is mochi?”, let’s discuss what it tastes like.

On its own, plain mochi tastes like marshmallows combined with the flavor of neutral gummy candy. It has a starchy after taste due to the rice. It also has a stretchy, sticky, chewy, and soft texture.

Mochi is also flavored with a wide array of ingredients such as green tea, herbs, sweeteners, and more. It can be filled with various fillings as well, with sweetened bean paste being a popular choice.

What Is Mochi Made of?

Mochi is primarily made of mochigome, which is glutinous, short-grain rice. Sometimes, other ingredients such as sugar, water, and cornstarch are also added to prepare mochi.

It can also be made with steamed brown rice. 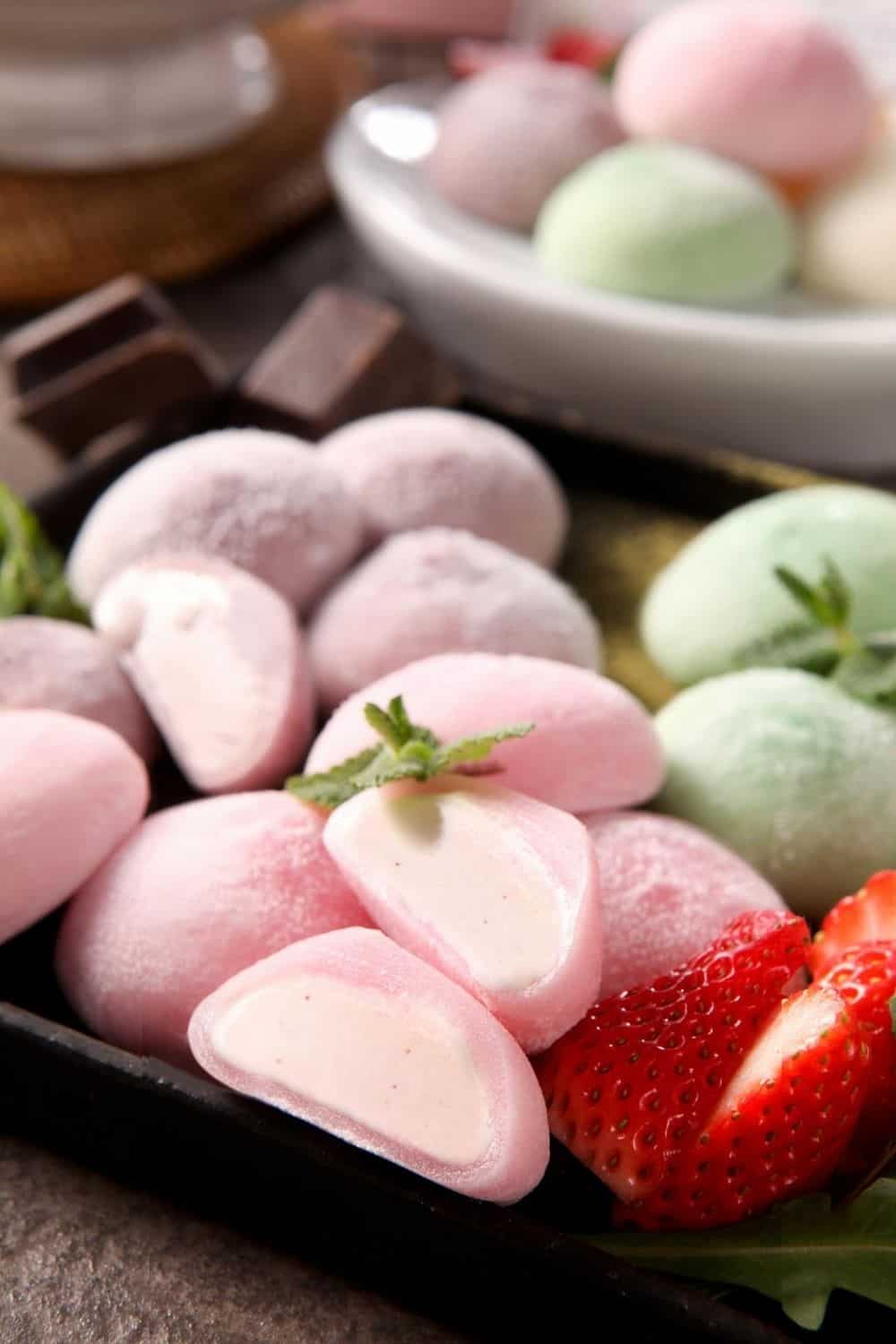 How to Eat Mochi

Fresh mochi is quite soft, chewy, and pliable, which is why you must eat it right away or on the same day. This is because the longer it’s left to sit out, the more hardened it will become. Hard mochi isn’t enjoyable to eat and is quite hard to chew.

You can eat mochi as a snack by seasoning it with sweet soy sauce and wrapping it in dried seaweed. You can also eat tofu mochi, which is sweetened with sweetly roasted soybean flour. Learn how to make tofu mochi here!

Alternatively, you can sweeten the mochi with a mixture of sugar and sweet roasted soybean flour before devouring it.

You can also eat mochi with soups. For instance, the traditional Japanese New Year’s soup called Zoni has seafood, veggies, and mochi in it. You can also add it to Japanese hot pot recipes such as Sukiyaki.

Moreover, you can prepare small bite-sized coconut mochi or sweet mochi by wrapping it in bamboo leaves and skewering it on a stick. Sweet mochi also acts as a nice, textured covering for refreshingly juicy strawberries.

You can also prepare mochi ice cream, which is my favorite way to eat mochi!

Click here to learn how to make mochi ice cream!

Pro Tip: Mochi is quite thick and chewy, which is why you must take tiny bites of mochi and chew on the rice cake well to avoid choking on it. 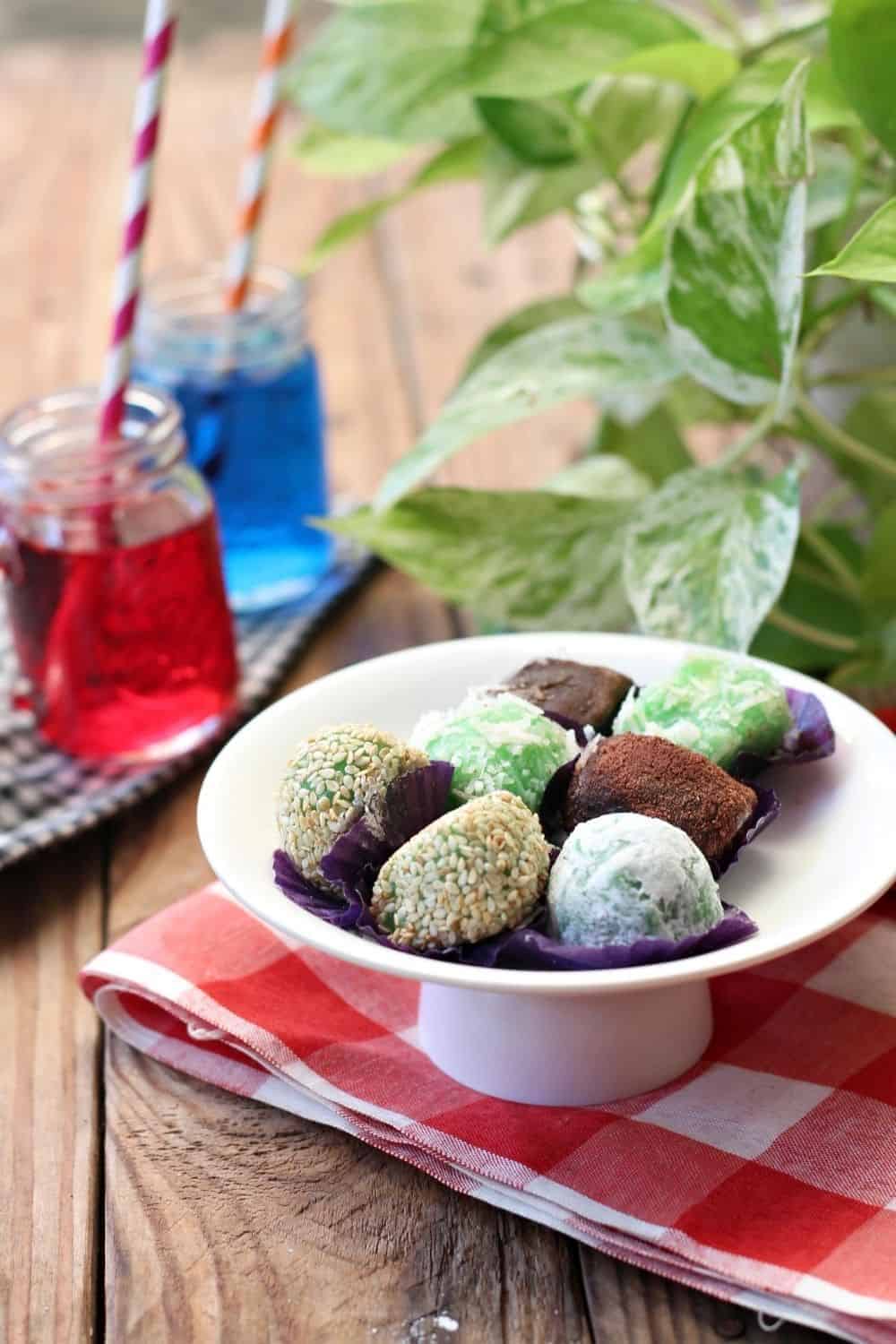 Yes, you can rest assured that mochi is indeed free of gluten. This is because the primary or at times, the only ingredient, in mochi is sticky, glutinous rice, which is grain-free, despite its misleading name.

How Is Mochi Made?

Mochi is prepared by steaming plain, glutinous rice and then pounding it into a smooth blend. In Japan, mochi used to be prepared in a ceremony known as “mochitsuki”, which means “pounding mochi”.

It is placed in a huge mortar, water is added into it, and then a large wooden mallet is used to pound the mixture until it’s fine and smooth. You can add more water into the mix if the mochi starts to dry.

This way, the prepared mochi will be pliable and moist. Once the mochi is pounded perfectly, it’s torn off into tiny pieces, which are then shaped into rounded, semi-flat circles.

I hope you enjoyed reading this guide on “What Is Mochi?”

In short, mochi is a Japanese rice cake that can be plain, sweet, and even savory. It can be eaten as is, with a sauce, wrapped in leaves, and added into prepared dishes.

It’s quite chewy and has a rice-like taste, which is often paired with a whole host of mostly sweet flavors. Regardless of how you eat mochi, it’s a staple Japanese food and tastes delicious!

What Is Gnocchi? Here's The BEST Gnocchi FAQ For Origin, Taste, Recipes & More!
What Is Star Anise And How Does It Differ From Aniseed?
What Is Codfish? The BEST FAQ For Taste, Texture & More 🐟
What is a fig and what does it taste like?
Are You Curious: What Does Eel Taste Like?
What Is Jackfruit and How to Prepare It?
What Is Mascarpone and What Does It Taste Like?
What Does Thyme Taste Like? Everything You Need To Know About Thyme
What Is Sriracha? Get To Know This World-Famous Sauce Here!
What does passion fruit taste like?
What Is Brick Cheese? From Origin to Usage
What is custard and how to make it
Click here to cancel reply.

Very interesting! Thanks for sharing.

I worked at a car plant that had Japanese trainers. They made many yummy foods while they were here.

This sounds and looks delicious. I would love to try it someday, soon.