Lobster is one seafood known for quite a lot of things. First, it is a delicacy known as the main dish and the main highlight in a number of dishes. Second, lobster also quite has a reputation for being a fancy food. It is known to be expensive.

I for one love lobster meat. If I can catch a good one at the market, I love to buy a lobster tail and grill it up or boil the lobster. No matter how you cook lobster I am going to be your best friend if you have some.

However, is it really? If you have never had any lobster before, then perhaps, you have got a few questions running through your mind such as what does lobster taste like or what to cook with lobster. Well, worry no longer for I have the answers plus an additional bunch of other helpful information. Read on and find out all in this article. 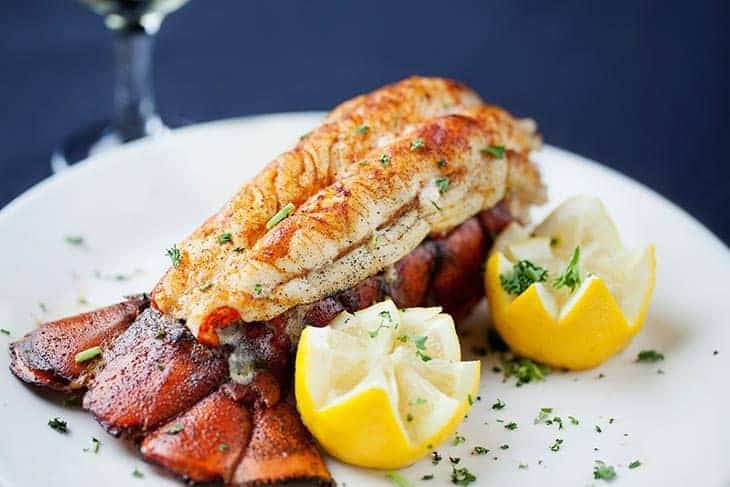 With the taste of lobster, you are sort of getting two flavors in one. You can get the sweetness of lean meat while also enjoying some of the crispy goodness of fiber of the tendons.

Its flavor can be likened to that of a crab. However, it is still not similar. The taste of lobster definitely has a sweeter taste and is a bit lighter as compared to crab.

The taste of lobster can be determined by looking at it from different angles. Generally, lobster employs a very different and unique flavor. This can also be one of the reasons why lobster is more expensive as compared to most shellfish.

Next, let us talk about the taste of lobster in terms of its texture. The texture is definitely one of the things I like about lobster. Its texture is somewhat caught between that of shrimp and crab. As compared to shrimp, it is not that chewy. Meanwhile, if you compare it to crab, it is not as flaky. To put it into words, lobster almost melts inside your mouth. 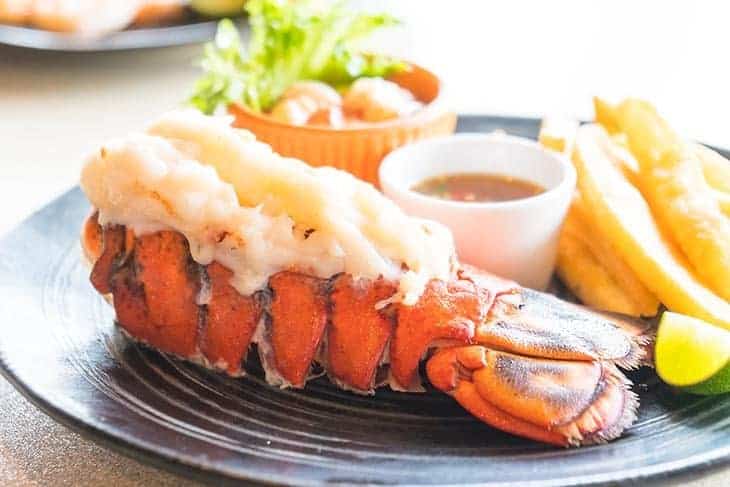 Now, the taste of lobster can also depend on what you eat it with. For example, it is common that people serve lobster dishes with additional butter. In a way, butter actually improves and places more emphasis on the flavor of lobster.

What the butter does it that it makes seafood like lobster moisten up. In addition, it also puts some more fat into a dish that is mainly protein. In fact, as compared to chicken, lobster is leaner.

Of course, just like any shellfish, lobster can also be defined as fishy. However, the fresh lobster will not contain that fishiness that typical fish dishes contain. In the event that the lobster you bought does, then it is better if you opt to buy a new one and check better if it is a credible seller that sells fresh seafood. Lobster should not taste fishy.

Seasonally speaking, lobster during the winter is more special. This is because, during this season, it is full of roe. The roe is located at the back of the lobster and feels very chewy and soft. Furthermore, it also tastes really fatty.

Overall, to really fully get to know lobster then you really should try it. I suggest you try it with other dishes or cook it in combos. This will be further explained in the next sections.

Taste of Lobster Based on Cooking Method

The taste of lobster can also be determined based on the specific method of cooking you used. Aside from the method, it also depends on what you cook or serve it with.

As stated, butter is probably one of the most common raw ingredients you can pair lobster with. It brings out more of the sweetness of a lobster and also softens the texture of it. This results in a very silky, sweet and mouthwatering feeling.

Next, let us now move onto the specific method by which you will cook lobster. There are numerous ways in which you can do this. Probably, the most common way to do this by grilling.

With grilling, you can mix lobster with a number of condiments and ingredients such as lemongrass, garlic and of course, butter. Keep in mind though that with grilling, the texture can dry up. However, the smell can be really nice plus not mention and the taste is really delicious.

Second, let’s talk about the boiling method. With boiling, the flavor of the lobster will remain intact and fresh. This fresh flavor will somehow remind you of the sea and perhaps, even the taste of the sea. Also, with steamed lobster, the flavor really remains juicy and of course, sweet.

The third is fried lobster. This is perhaps a personal fave. It’s crispy, crunchy and just oh so good.

Lobster tail is perhaps the most sought-after part of the lobster, with the claws coming in a close second. The meat of a lobster tail is firm and chewy and tastes like a meatier and sweeter version of shrimp.

The firm, spongy texture comes from the high amount of protein in the tail. Of course, lobster meat soaks up a lot of the flavors of the ingredients that it’s cooked with, so if you cook it with garlic and butter, you’re going to end up with a garlicky and buttery taste.

A bisque is a creamy and hearty soup that highlights the flavor of its main ingredient. In the case of lobster, it’s going to highlight that shrimp-like flavor. Lobster bisque will taste creamy, sweet, and succulent, much like a lobster that’s been cooked in butter and cream.

If you use the shell of the lobster in the cooking liquid, you will get a ton of lobster flavor in the final soup.

Since lobsters and crabs are both types of crustaceans, they do have similar flavors. However, lobsters tend to have a sweeter and cleaner flavor compared to crabs, which can have muddy or fishy flavors depending on the type of crab.

No, not all lobsters are sweet. Some species of lobster have that succulent, sweet, and tender flesh that you want in lobster, while others have a denser, less sweet taste.

The texture and flavor profile of lobster meat will depend on where the lobsters are harvested. In general, cold water lobsters have sweeter and more succulent meat compared to lobsters harvest in warm waters.

Which lobster is the sweetest?

The lobster species with the sweetest meat is the Maine lobster (Homarus americanus). The reason for the sweetness and tenderness of the meat is that this particular species grows in cold, fresh, and clean waters.

The temperature of the water does two things. First, it allows the lobsters to grow more slowly, resulting in tender and succulent meat. Second, it prevents the salt in the water from permeating too much into the meat, which results in the sweetness of the meat.

Parts of a lobster that contain meat

The main parts of the lobster that contain edible meat are the tails and the claws. This is where you get the best tasting lobster meat. However, there is also meat in the knuckles and there is some in the ribs area as well. You have to work a bit harder for those sections but it is worth it.

What to eat with lobster?

There are many delicious sides to lobster but some of the most traditional are corn, a light pasta, crusty bread, rice, and salad. No matter what side dish you serve with lobster be sure to serve plenty of hot drawn butter with it as well. Lobster dipped in butter is the best way to eat it. 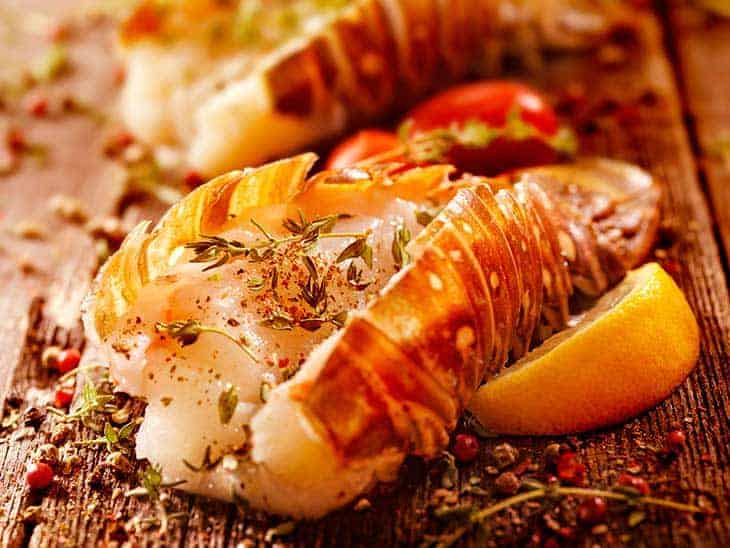 When buying or tasting lobster for the very first time, you can refer to this set of additional information as your go-to guide.

In conclusion, while lobster may be pricier, it is worth it indeed. Lobster is a seafood that comes with a number of nutrients. Its taste is very sweet, chewy depending on the method of cooking. Moreover, you can also have it crispy if you want by frying it.

You can taste the sea if you opt to just steam or boil it. You can also opt to grill it with a variety of different condiments. This method perhaps will yield the most delicious and tastiest lobster dish. Lastly, you can cook a variety of other dishes with lobster such as lobster pasta and lobster pizza. So do let us know what you think lobster taste like when you give it a try.

Hope that you can find the answer for yourself through this post. If you find it helpful, feel free to share it to your friends and don’t be hesitate to leave comment below to share with us your experience.

How to toast coconut (3 stress-free ways!)
Can You Freeze Ricotta Cheese?
How To Steam Green Beans In A Microwave
What is pepperoni? (Is it salami?)
How to Reheat Rice 3 Ways (Plus Tips)
So What The Heck is Ricotta Cheese Anyways?
What is salad oil?
How long do oranges last (plus how to freeze the tropical fruit)
Learn the Difference Between Ziti and Penne Pasta
What is celery salt? (Master the art of making it!)
Are You Curious If Your Watermelon Has Gone Bad?
How to Make Iced Tea in Quick and Easy Ways