My grandmother used to cook everything on a cast iron skillet.

I couldn’t understand this because there were plenty of non-stick skillets to choose from.

She was insistent though and never changed her ways. After becoming an adult and living a few years, I began to understand the appeal. 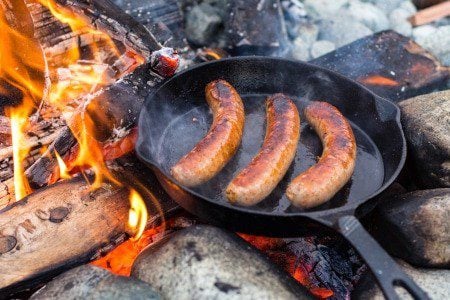 Why use a cast iron skillet?

Why season a cast iron pan?

What kind of oil to season a cast iron skillet? 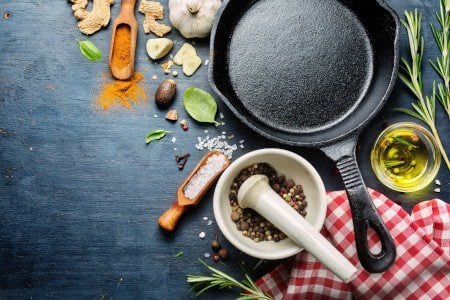 Frankly, you can use whatever kind of food-grade oil that you prefer. Lard has always been a popular option for cast iron skillets over the years. Ever see a can or jar of bacon grease on the stove and wonder what’s up?

It seasons a cast iron skillet really well and adds a bacon flavor to whatever you cook next. (Win-win.)

How to season a cast iron skillet on the stovetop

When seasoning a cast iron pan, your kitchen may get a bit smoky. This isn’t an unsafe situation or it shouldn’t be but you do want to make sure you have some ventilation.

When I am seasoning my cast iron pan, I generally open a few windows in the house prior to starting the process. 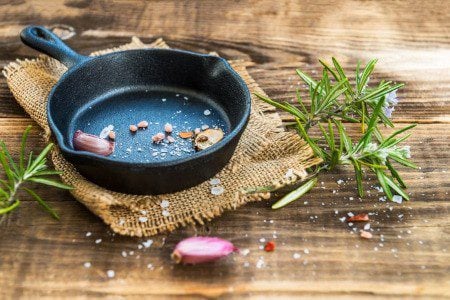 Note: I don’t generally do a multi-step process unless I have had to really scrub the pan or if it hasn’t been used in a long time. During normal use, I season in one round after a regular wash.

However, I do recommend that you do a multi-round seasoning over a few months or a few weeks if you use the pan daily.

How to wash a cast iron skillet

There are two of us who use our trusty cast iron pan several times a week and we each clean it differently: Andi uses a bit of grease-cutting detergent, and I don’t use any soap at all.

A cast iron skillet can generally be cleaned with super hot water and a good scrub with steel wool. You can use a little soap and light scrubbing and not have to re-season, but don’t let water sit on the finish.

Too much detergent and a long bath soak removes that desired seasoning, and water that sits on cast iron will leave rust spots very quickly. (Of course that means never put cast iron in the dishwasher.)

Our tips for washing your cast iron skillet:

✔This is an excellent cast iron skillet scrubber

Even if your cast iron pan looks a bit rusty, it can be restored.

It can be tempting to think that a cast iron pan is old and trash it but a little love (and the steps above) can bring it back to its useful old self.

Can you boil frozen chicken?
How to Make Clarified Butter in Two Easy Ways
Can You Freeze Pesto? Here’s Everything You Need to Know
How to cook asparagus: 5 of the simplest techniques
How to toast a bagel in the oven
How to Clean a Kitchen Sponge
How to Melt Nutella – 3 Techniques You Need to Know
How to Cut a Pineapple: The Simple and Easy Process
Here's The Ultimate Guide For How To Cook Bacon In The Microwave
How to reheat tamales and keep them fresh
How to Clean Copper Mugs: 3 Easy Ways
8 of the Best Herbs That You Can Actually Grow at Home
Click here to cancel reply.

Looks tasty! I am sure that this dish will be even more tasty if you drink coffee while eating :)