Parsnips aren’t part of the commonly used vegetable group, which is why you might find yourself wondering, “what’s a parsnip?” once you come across this curious vegetable.

And while it isn’t popular like its peers, such as carrots or turnips, a parsnip makes a great addition to both sweet and savory dishes. 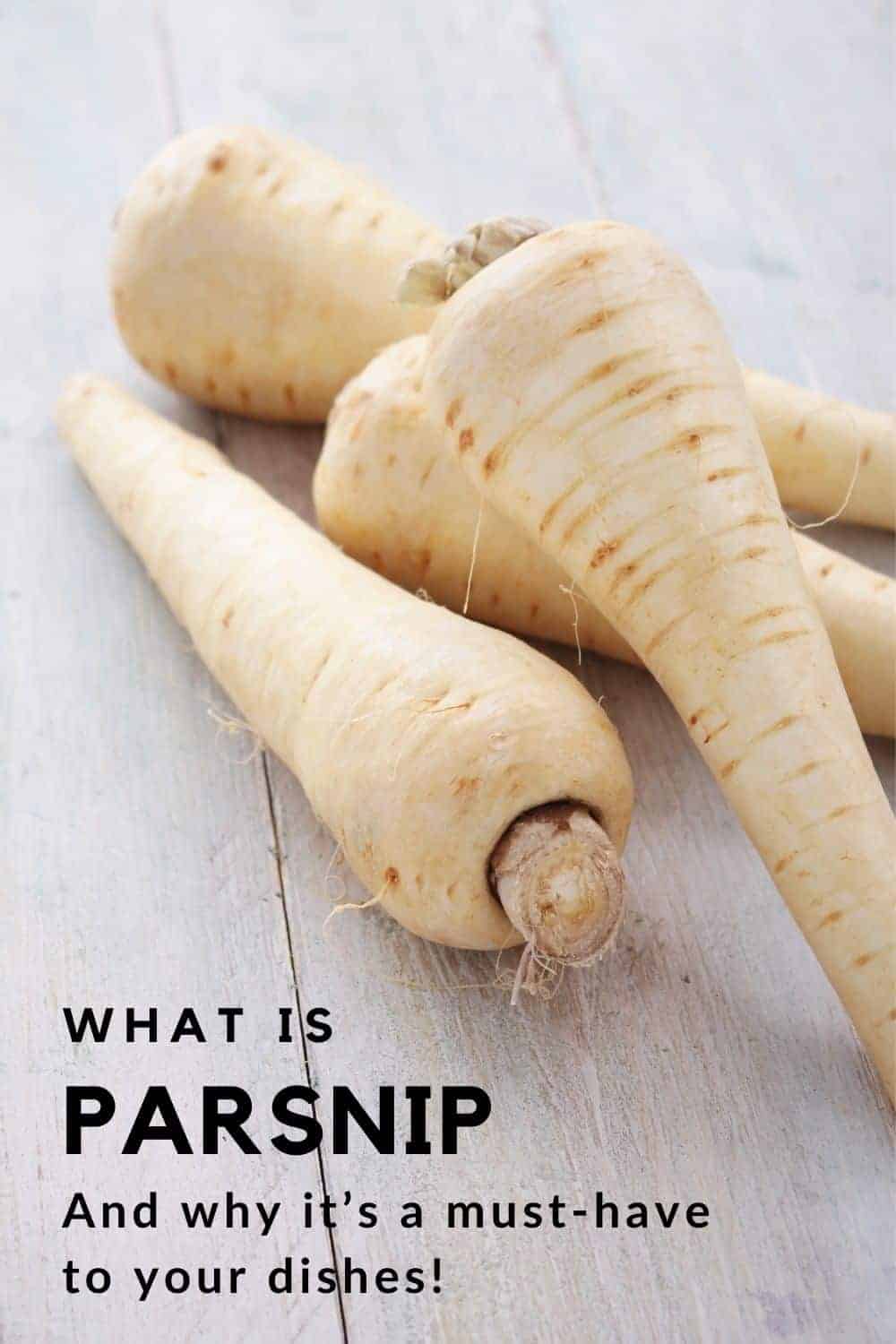 This unique vegetable holds many benefits. It can also be used in many dishes, both cooked and uncooked. It also brings a warm, distinct flavor to all your recipes.

Here’s what you need to know about parsnips and how you can use them.

What is a parsnip?

Originating from Eurasia, parsnips are similar to carrots. They are long-rooted vegetables that grow underground and feature a light, creamy color when ready to harvest.

Parsnips are widely available in fall through spring because these are the seasons when they are the freshest.

Though parsnips are often confused with carrots, there is one very distinct difference between them.

Parsnips have a pale, creamy, whitish color and come with a buttery taste that is different from carrots.

Although parsnips are considered biennial plants (which means they take up to two years to complete their growth cycle), they usually aren’t edible if they are not harvested after their first year of growth. 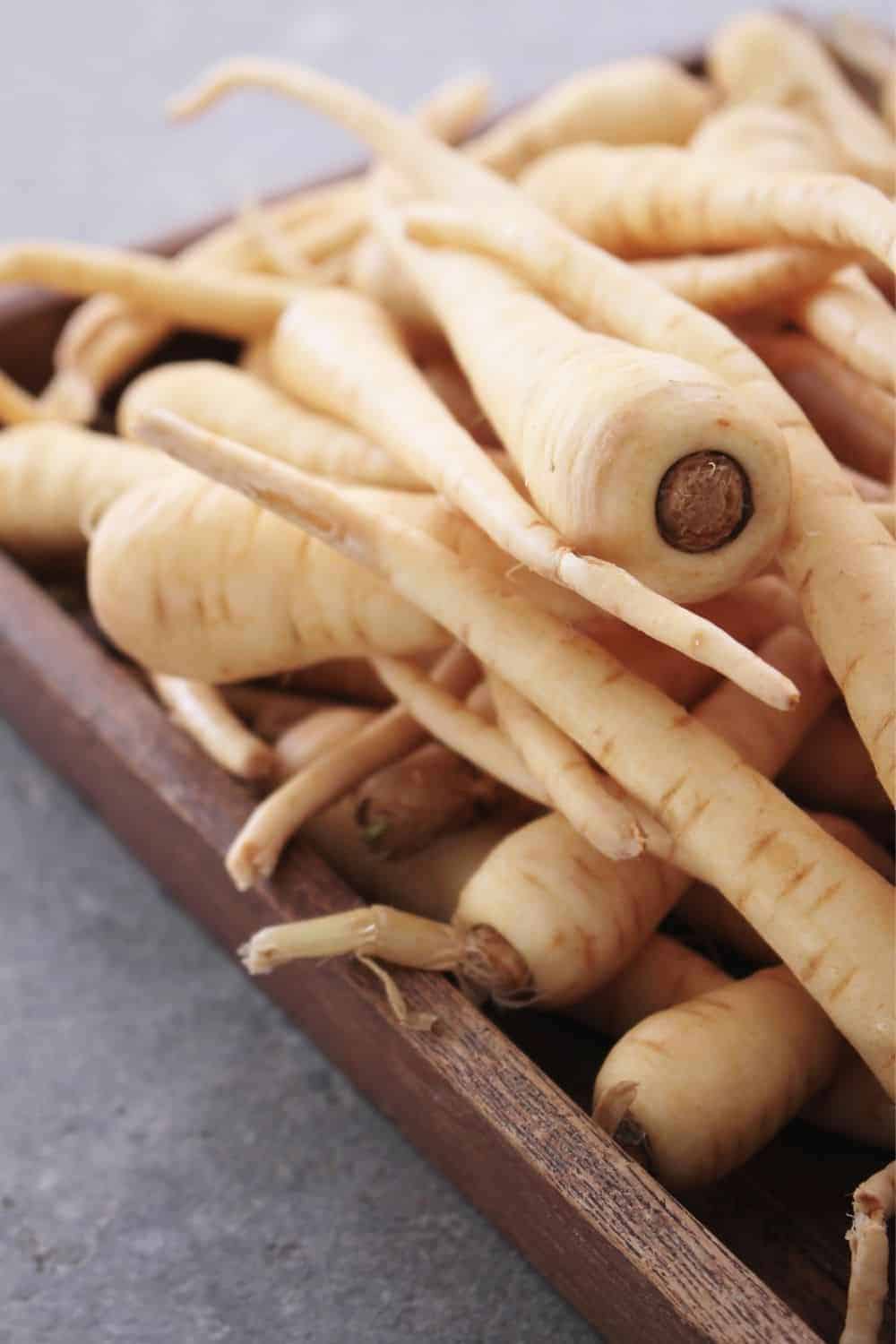 Parsnips don’t only look like pale versions of carrots, but they also have a similar taste.

Because they grow underground, their flavor is also earthy but starchy, like potatoes.

Staying underground for so long comes with its own benefits: When parsnips mature underground during the winter frost, they tend to become sweeter and more buttery than they were before. 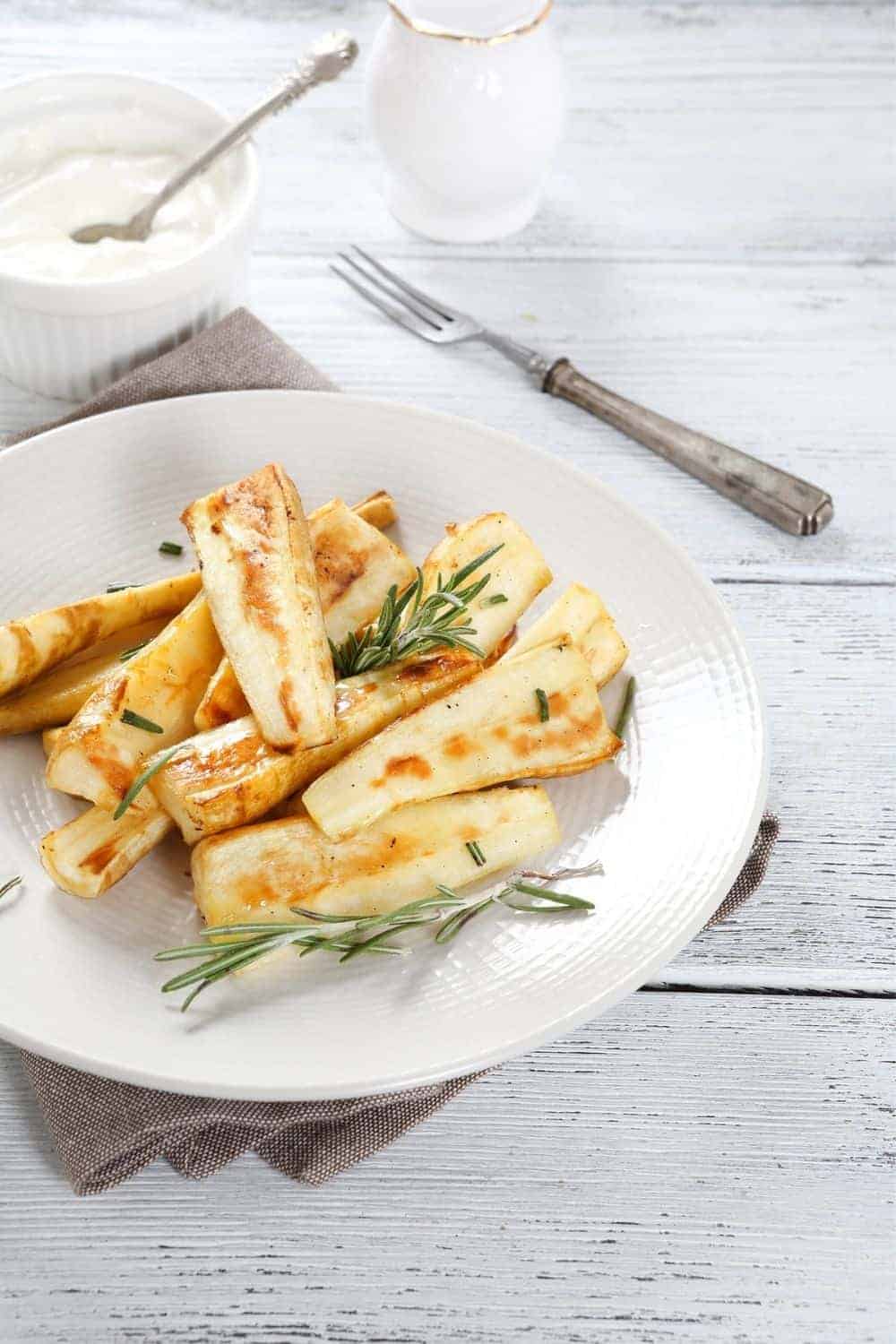 How to store parsnips

Luckily, parsnips aren’t the kind of vegetable that goes bad if you don’t use them immediately.

You can store parsnips for up to two to three weeks in your refrigerator. Remember to remove the tops off of the vegetable or they can dry out the parsnip over time.

You can place them in a loose, plastic bag before storing them in the fridge. On the other hand, if you’re storing cooked parsnips, they can only last for around two to three days before going bad.

You can also freeze them for as long as ten months if you wash, scrub, cut them up into little cubes, and blanch them before placing them in a freezer bag.

How do you cook parsnips?

There are several ways to cook parsnips. You can boil, roast, or sautee them.

To find the best parsnips for your recipe, look for ones that are smaller and straighter. Big parsnips may be tempting, but they have a less dynamic taste and don’t bring much flavor to your dishes. They’re also harder to chew even after being cooked.

You can make sweet dishes with roasted parsnips, or an alternative to mashed potatoes with mashed parsnips instead.

You can prepare parsnip recipes in the oven, on the stove, in the microwave, and some recipes don’t require cooking the parsnips at all.

Parsnips can also be served with stews, chilis, chicken, and beef. They can be added to salads as well or used as the primary serving (such as with parsnip rice).

Once you’ve selected your parsnips, scrub them with a vegetable brush and wash them. 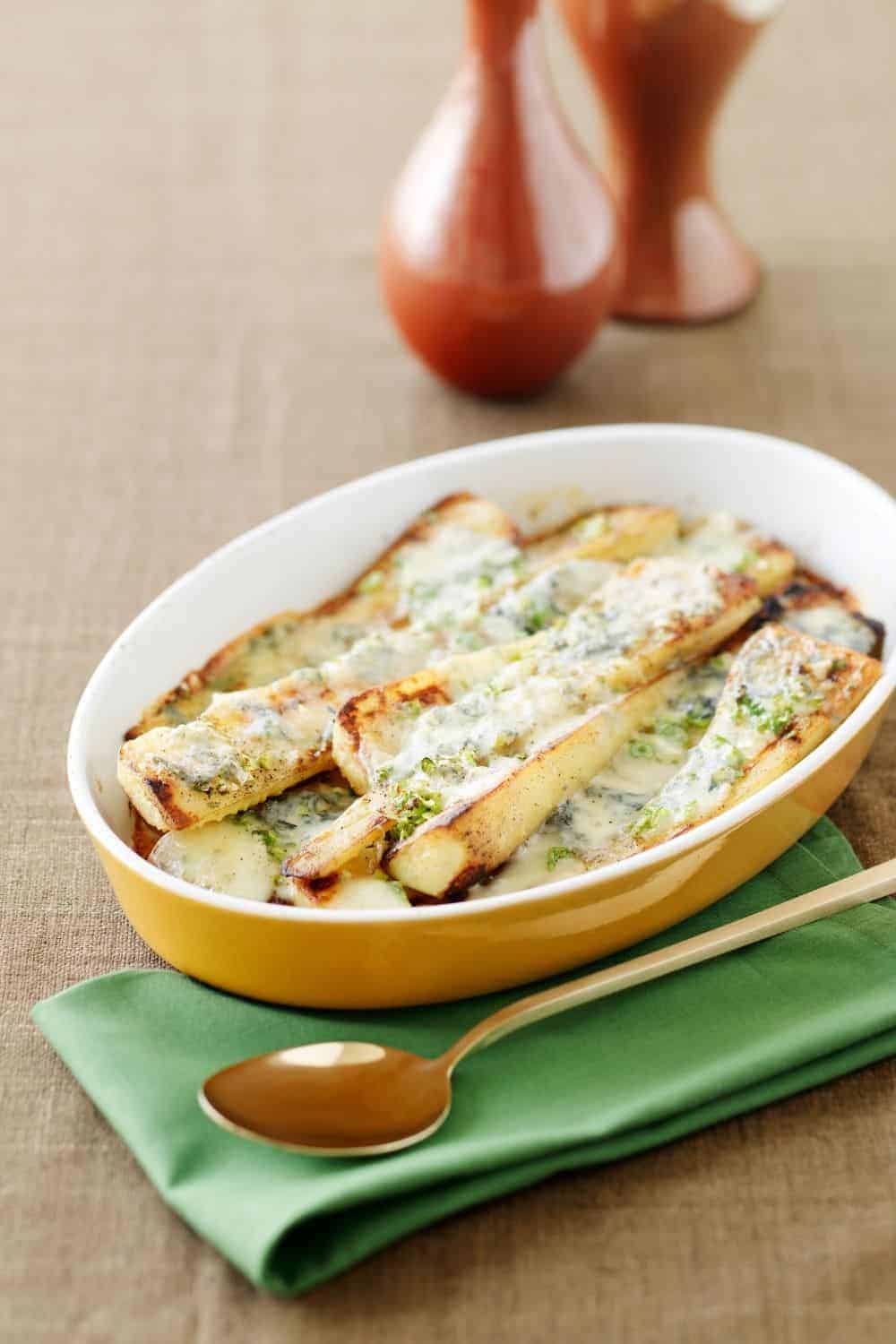 Do you have to peel parsnips?

It’s better not to peel parsnips. It’s preferable to use a vegetable brush to scrub the outer layer of the parsnip before you use it for your recipe.

Is a parsnip a root vegetable?

Is a parsnip a vegetable? Yes, parsnip is a root vegetable that grows underground. It can take up to two years for a parsnip to complete its full growth cycle, which is why it is only available for half the year at farmer’s markets.

This is also the reason it has a starchy, earthy taste typical to underground vegetables such as potatoes. 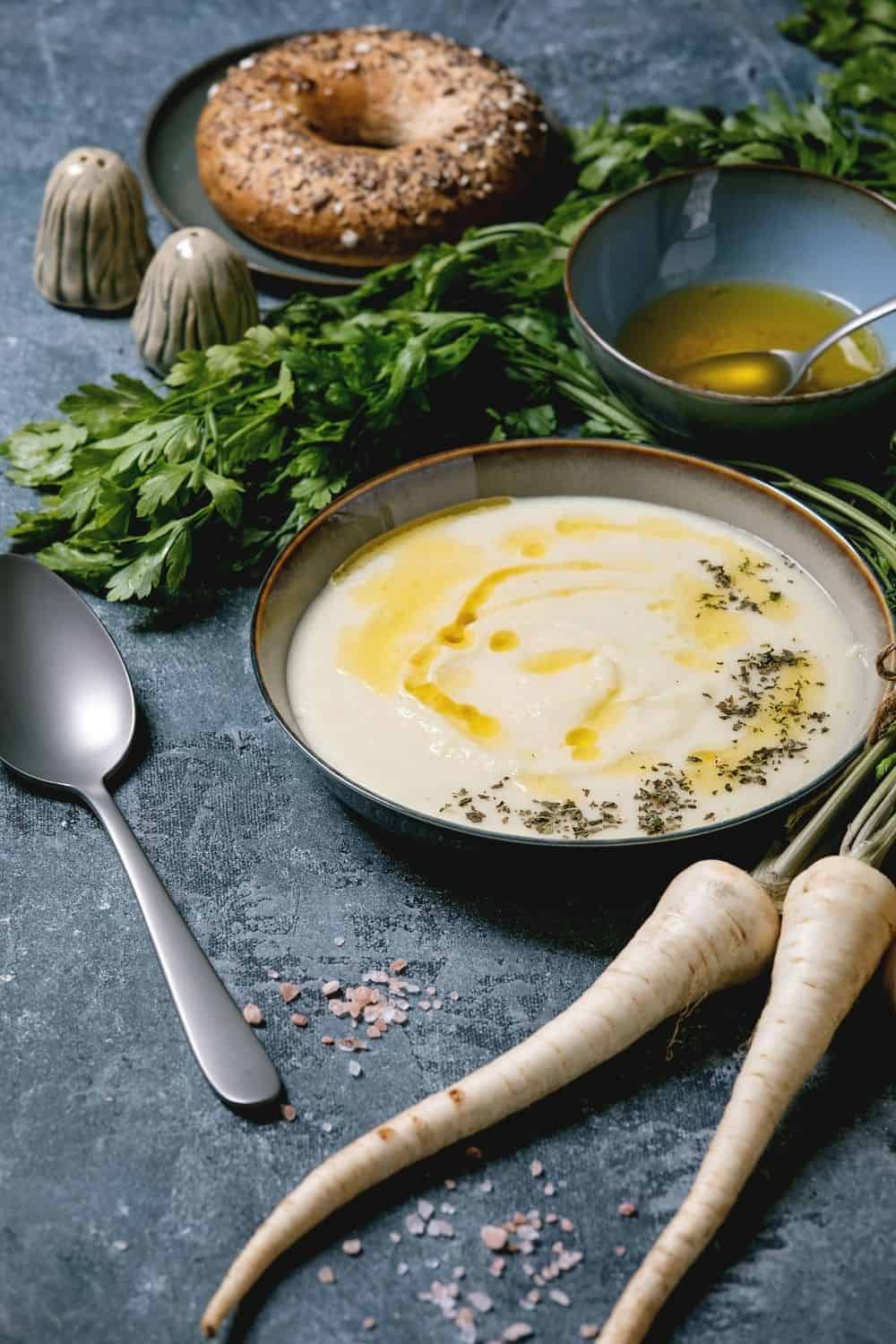 Hopefully, the essential details surrounding parsnips have encouraged you to try parsnips out for yourself.

With their versatility and unique flavor, you won’t regret your decision—whether you use them in sweet dishes or include them in your main course!

What Is Porridge & How Do You Cook It?
What Is Allspice?
Corn Flour Substitutes: 7 Ideal Options
What Is A Beignet? Answers, Recipes & More
What Does Fontina Cheese Taste Like? Here's the BEST FAQ! 🧀
What Is Yellow Squash? Here's An FAQ With Tips About Your Favorite Gourd!
What Are Cloves? Here's Your Guide To This Versatile, Worldly Spice!
What Is Jackfruit and How to Prepare It?
What Is Fleur de Sel And Why Is It Expensive?
What Is Boba? How Is It Made? What Can You Do With It?
What Are Black Olives?
What Is Caster Sugar? FAQ, Recipes, And More
Click here to cancel reply.

Wow, your website was really interesting especially for me whose trying to improve my cooking( eg, making edible meals) while also trying not to waste food & money by letting items sit too long because I didn't know what to do with them. I have a question-what can I do with oranges that have sat around too long but aren't bad yet(I don't think)? Just use the skin for zesting?anything else? Thank you. MaryAnn Clay

Hi, MaryAnn! Thanks for coming by. Off the top of my head, you could slice them into "wheels" and dry/dehydrate them to use in dry potpourri or string them with cinnamon sticks for swag; cut them the same way and let them float in water with a few other spices for a wet potpourri; juice them and taste to make sure they aren't rancid (if it tastes fermented, toss the fruit and the juice), then cook the juice down with some sugar for an orange glaze. If you don't need it right away, freeze the glaze (or even just the juice) in an ice cube tray and toss cubes into a blender for smoothies when you need one or two. Or, if the oranges are still good to eat, peel and process the orange pulp to make into marmalade or a cranberry relish. (I love cranberry compote; I make mine with apples but lots of recipes combine cranberries with orange pulp cooked together with sugar and a few spices. It lasts for weeks in the fridge, too.) Hope this helps!