Oftentimes, when you’re in a rush, you simply don’t have time to wait for the chicken to thaw before you add it to your recipe.

On the other hand, you might forget to leave it out to thaw and realize only at the last minute that you can’t use it in your recipe when it’s frozen.

The good news is if you ever wondered, “can you boil frozen chicken without waiting for it to thaw?”, then you’re in luck! 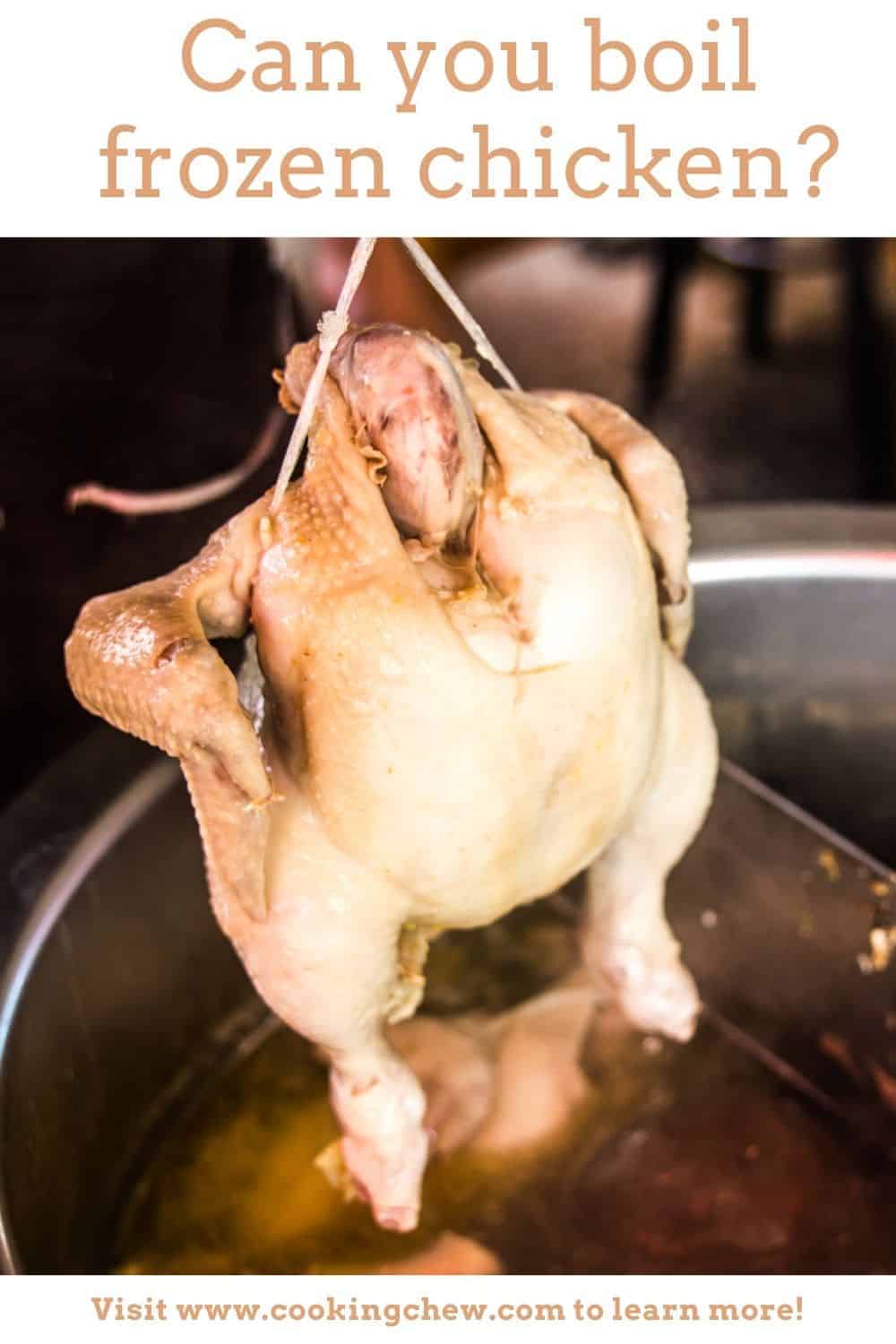 Boiling chicken that hasn’t thawed is quite possible, giving you the chance to go ahead with your recipe without the hassle of putting in a few hours of waiting time until the chicken has defrosted.

However, there’s a certain method for boiling frozen chicken to get the best results. Here’s what you need to know.

How to boil frozen chicken

It’s important to remember that if you have a whole chicken, it probably isn’t a good idea to boil it without thawing it first.

A whole chicken should be defrosted in the refrigerator before you can use it to ensure that it’s properly cooked when the time comes.

If you ever decide to boil a whole chicken, you’ll have to take extra precautions to make sure it’s cooked from the inside. However, if you cut the chicken up or have pieces of frozen chicken, boiling them is much easier without the risk of leaving any part of it undercooked.

Regardless of how you decide to cut the chicken, it would help if you always boiled it over a stove or in the oven and never in a microwave. A microwave doesn’t provide sufficient heat to cook frozen meat and might cook the outside without allowing the heat to reach the inside.

The most popular way of boiling frozen chicken is in a pot of boiling water.

Another common way of boiling frozen chicken is by using chicken stock.

Because the chicken is frozen, it will require a longer cooking time, making it prone to losing its moisture. That’s why more stock helps prevent it from drying out. 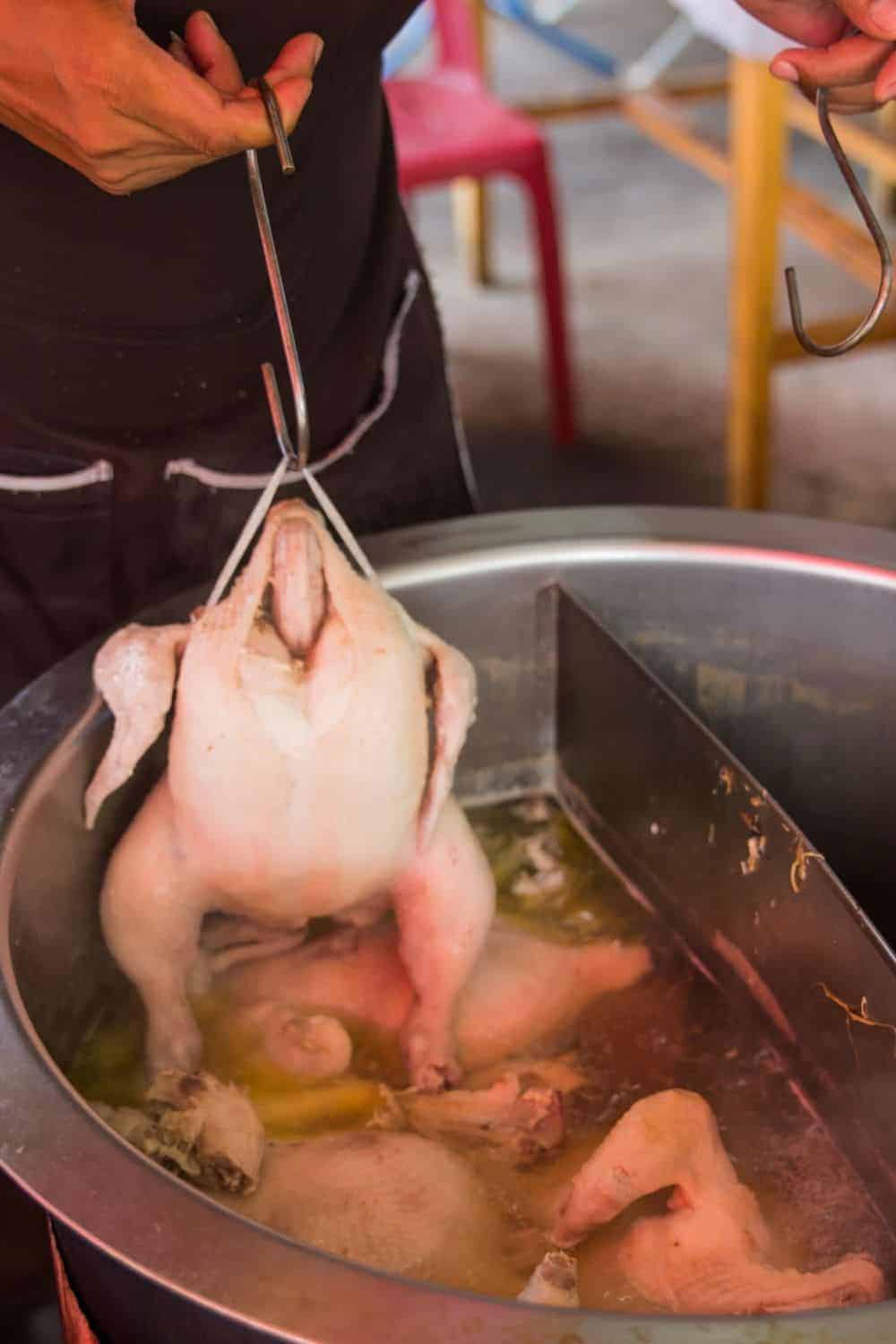 In a pressure cooker

If you have an instant pot or a pressure cooker, it’s acceptable to boil the frozen chicken in it. However, you can only boil a few pieces of chicken at a time.

The advantage of approach is that it doesn’t take as much time, while also providing the chicken with the right amount of heat it needs to be cooked from the inside and outside without drying it out or burning it.

All you have to do is add around a cup of water and seasoning to the chicken pieces and let the chicken boil for around 10 minutes.

If you have bone-in chicken, it might take a little longer. Let the pressure release for two minutes, and you’re good to go. 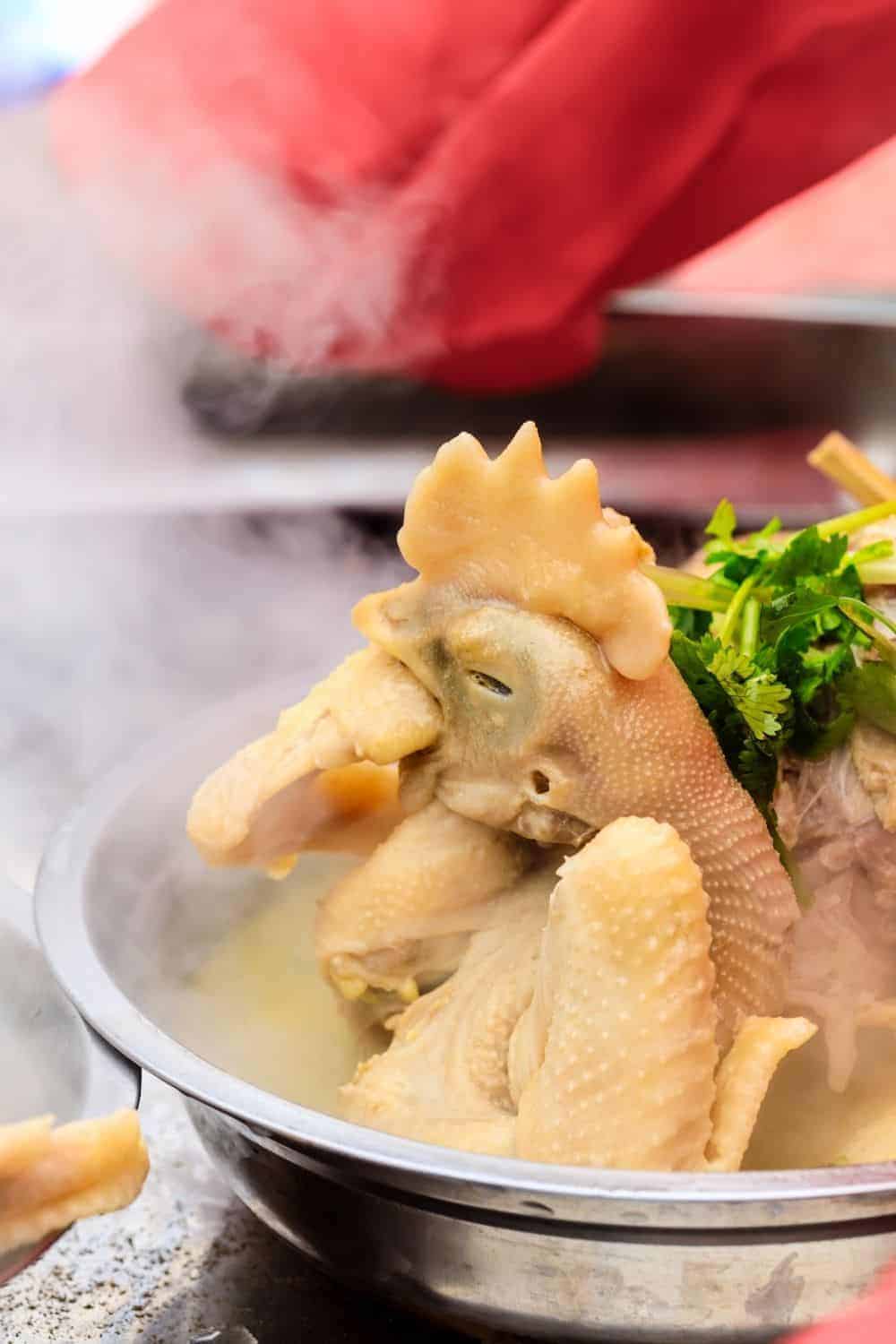 How long to boil chicken for?

If you’re adding the frozen chicken to a recipe, the best way to determine how long you should cook it for is to remember that it will take 50% more of the amount of time it would take to make the recipe with defrosted chicken. For example, if your recipe required 30 minutes of cooking time with thawed chicken, you would have to cook for 15 minutes longer if your chicken is frozen. Similarly, if you’re boiling chicken that hasn’t already been thawed in a water bath, microwave, or refrigerator, then boiling it might take you up to half an hour.

How to know when boiled chicken is done?

One of the easiest ways to know that your chicken is done is to use a meat thermometer that checks your chicken’s internal temperature. Most chicken that has been thoroughly cooked is close to 167 degrees Fahrenheit. Another way of ensuring that your chicken has been thoroughly boiled is to cut through the meat with a fork or a long utensil and see what the liquid coming out of the chicken looks like. If it is cloudy, the chicken is not cooked yet. But if the liquid is clear, then the meat has been cooked. Most cooked chicken should also be a distinct white—different from the pinkish hue of a raw chicken. However, depending on what cut chicken you have, checking the color may not always be the most accurate way of determining if it’s cooked. This is because some cuts are still slightly pink even when they’ve been fully cooked. 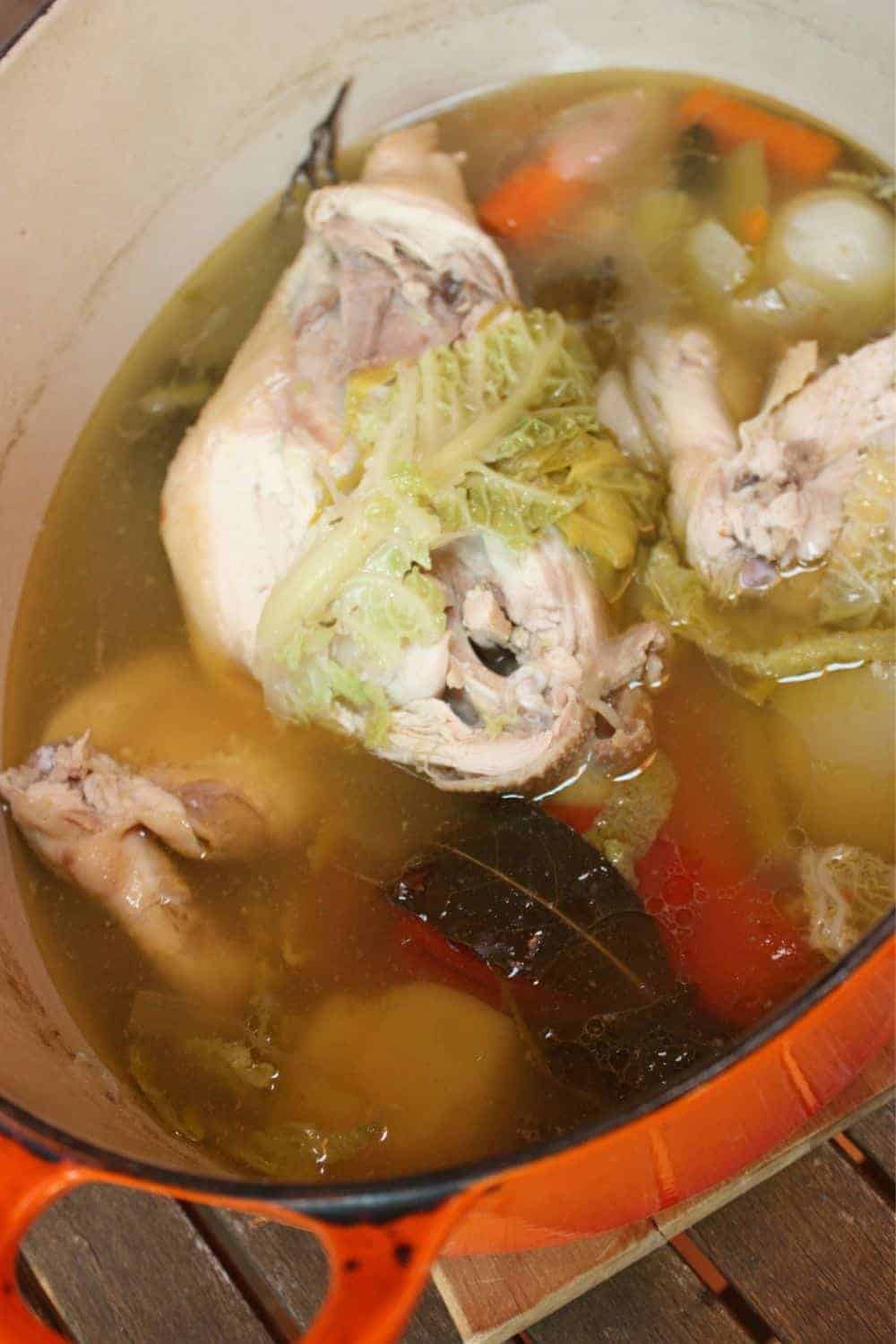 Don’t rely on the color of the chicken to determine whether it is cooked or not. As mentioned above, some chicken don’t turn white when they have been thoroughly cooked, which means you might have overcooked and dried them out. As it stands, it’s better to use a thermometer to check its internal temperature. Another thing to remember is not to use a slow cooker for boiling frozen chicken. This is because slow cookers don’t allow the chicken to reach the required internal temperature it needs to be at to be okay to eat. 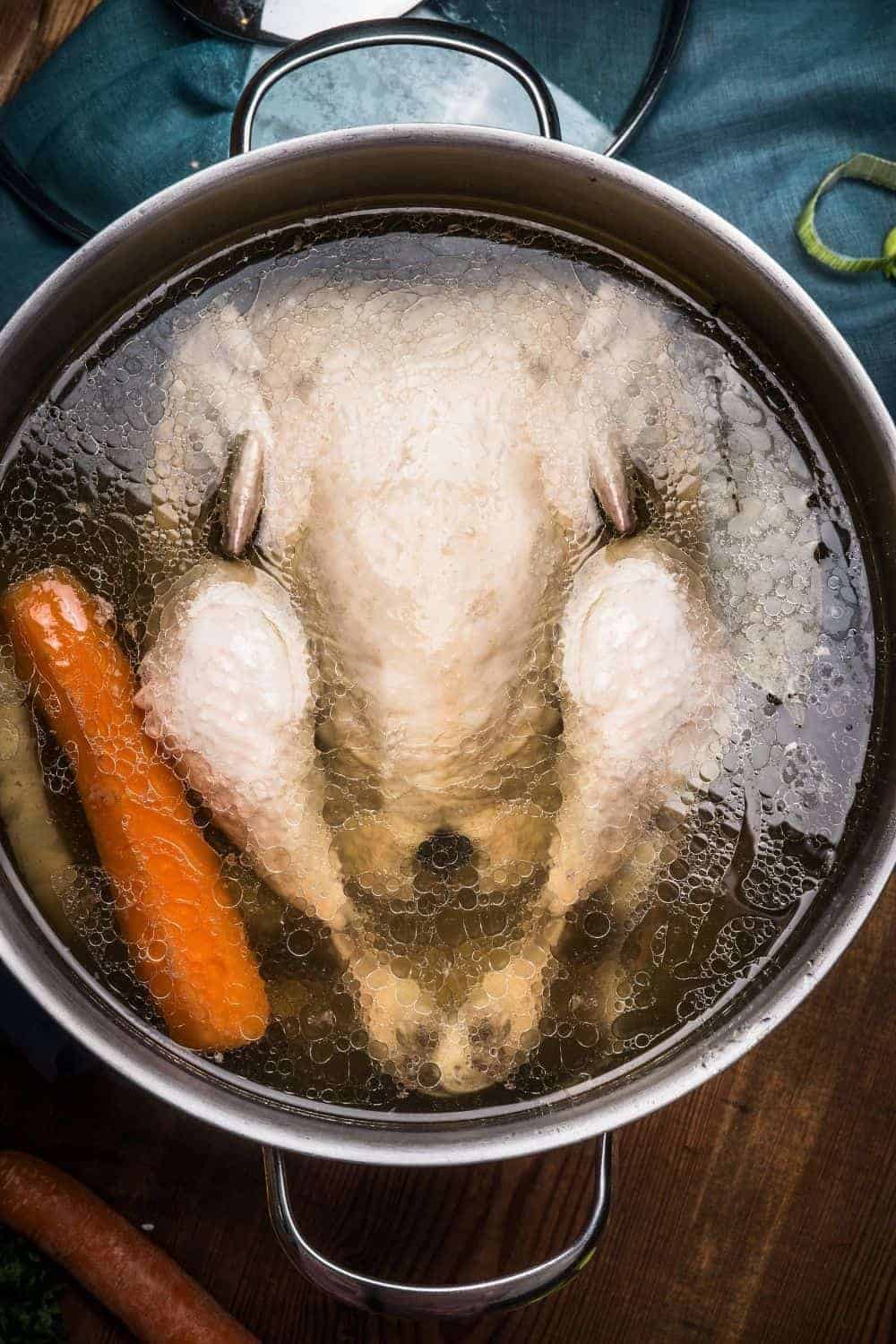 Hopefully, you now have a clearer idea of boiling frozen chicken without having to wait for it to thaw. Remember, as long as you are vigilant about ensuring that it’s been fully cooked, you shouldn’t have any problems using the methods listed above.

How To Dry Rosemary In 3 Easy Ways
How to Store Cornbread – All Things You Need to Know
How to Make Clarified Butter in Two Easy Ways
Learn How to Melt Peanut Butter Quickly
How To Trim Green Beans
How to dry sage (4 reliable methods and essential tips)
Learn How to Tell If Your Salmon Is Bad and Should Be Thrown Out
Seasoning a Cast IRON Skillet the Easy Way
How to reheat fried chicken – Do it the right way
How to Store and Cut Green Onions
How to Melt Nutella – 3 Techniques You Need to Know
Does Bacon Go Bad? 🥓
Click here to cancel reply.