If you’re on the lookout for the perfect summer fruit, then look no further than the juicy lychee!

Lychees are an incredible and versatile fruit that you can eat in various ways. The lychee fruit has a unique and refreshing taste, so it is the perfect ingredient for summer beverages, such as mimosas, lychee martinis and mojitos.

Read on to find out everything that you need to know about the tropical lychee flavor! 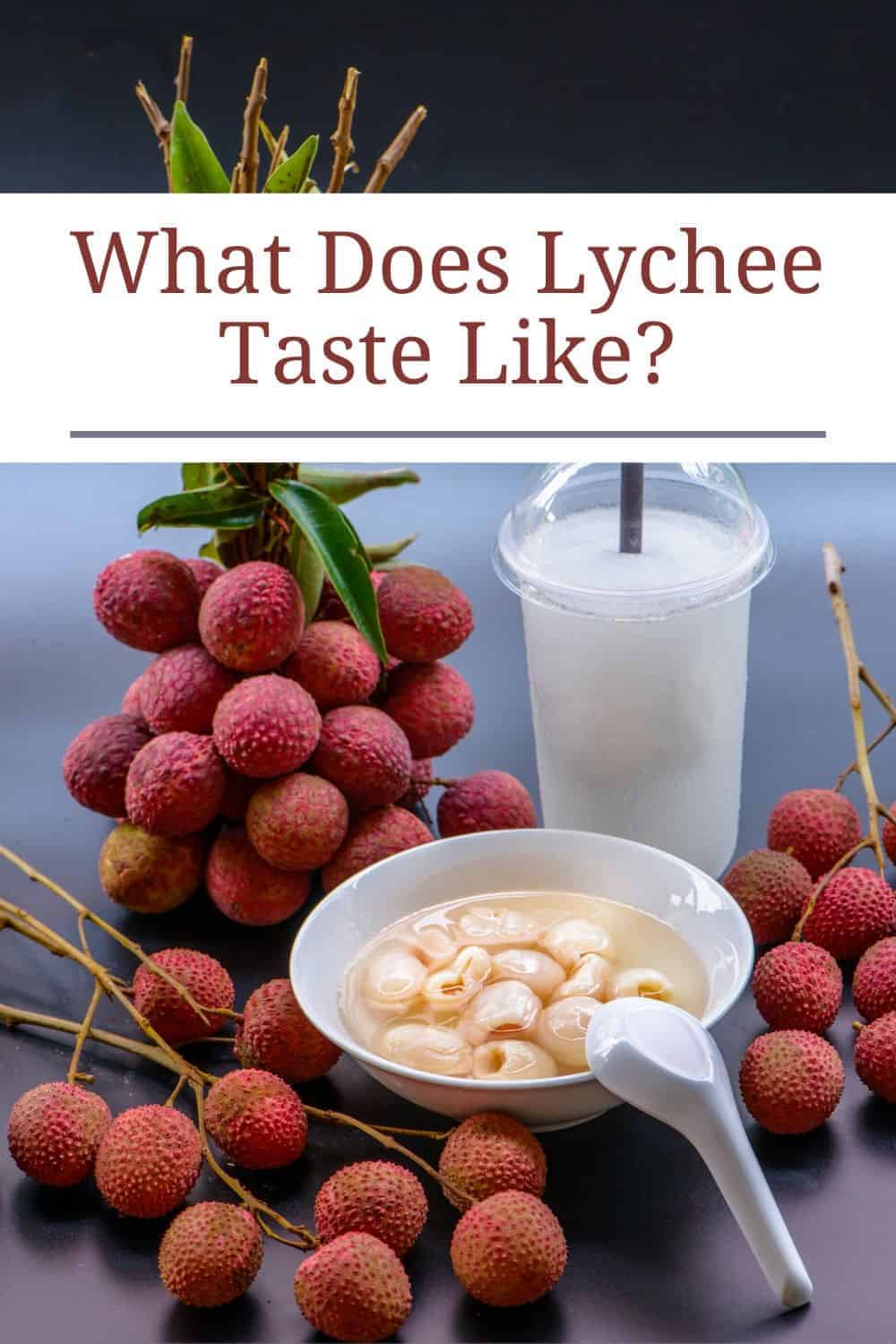 Lychee is a tropical fruit that has a unique flavor and appearance. It is native to China, however, it can grow in some warm regions in the US, such as Hawaii and Florida.

Lychee is also called “alligator strawberry” because it looks a bit similar to strawberries thanks to its bumpy, reddish skin.

The lychee fruit is oblong or round and is about the size of a golf ball or around 1 ½ to 2 inches in diameter. 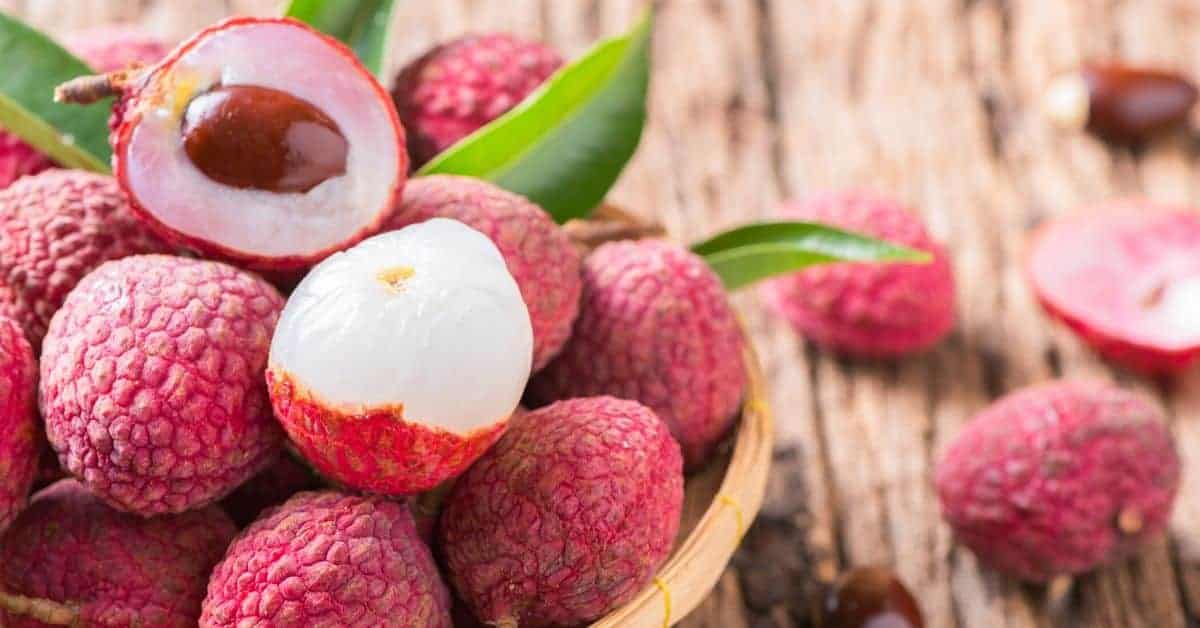 So, what does lychee taste like? Well, it has a sweet and aromatic flavor, which is balanced out with a slightly acidic flavor.

It tastes somewhat similar to a grape, but it also has a citrusy and tart or sour undertone. Because of the sweet and sour taste, lychee pairs exceptionally well with other tropical fruits.

Lychee is for sure a bold flavor. While eating them raw is tasty their boldness really does lend well to drinks and as an addition to other dishes.

Keep in mind when tasting lychee for the first time that it does have a pit. Don’t just bite down into it without considering that first.

How Do You Eat Lychee?

Lychee is an incredibly versatile fruit that you can have in multiple ways. However, if you want to experience the burst of the lychee flavor, then it’s best to eat it raw.

You simply have to peel the rind and then eat the fruit whole. Just make sure to spit out the pit or remove it before eating the flesh of the fruit.

With that said, in the US, lychee is mainly used in preparing drinks of all varieties, particularly alcoholic beverages such as lychee mimosas, mojitos, and martinis.

Moreover, you can also add lychees in green salads, fruit salads, ice creams, and other refreshing beverages such as smoothies and milkshakes.

You can also use lychees in various desserts such as this delectable apple, lychee, and raspberry crumble.

Because of its aromatic and robust flavor, you can add it to a sweet and sour sauce for a savory fish or meat dish. You can also add it to duck or meat curries to add a hint of sweetness and acidity and a unique flavor to the curry.

How Do You Peel Lychee?

Even though the outer rind of lychee is quite brittle, it is pretty thin and easy to peel off, particularly if the lychee is perfectly ripe. Simply pierce the skin of the lychee with your fingernails and pull the rind off.

Alternatively, you can use a knife to score and then split the lychee. Also, make sure to remove the pit before eating the fruit.

Where Does Lychee Come from?

The lychee fruit is a relative of longan and rambutan and is native to Southern China. However, it’s quite a popular fruit all over Southeast Asia. Lychee is also grown in America.

The lychee season starts in May and continues all through the summer season. So lychee is a summer fruit.

Is Lychee a Fruit?

Lychee is indeed a fruit, but it’s also known as a lychee nut. It has three layers – the red husk or sink, white flesh, and brown pit. Only its flesh is edible— you can’t eat the skin and seeds.

Even though the exterior of the lychee fruit looks quite firm and tough, it’s pretty easy to remove with just your fingers.

Removing the husk reveals a fleshy white interior – the edible part of the lychee – with a firm texture and glossy shine.

How to Pick Out Lychee

When picking out fresh lychees, choose the ones that are larger than an inch in diameter and have bright red skins.

Make sure to check the ripeness of the fruit by gently pressing your thumb against its skin.

Perfectly ripe fruit should feel a bit bouncy to the touch. If it’s too soft, then it’s overripe.

Moreover, fresh and ripe lychees are bright red and free of soft spots and blemishes. If the fruit is oozing liquid or has a fermented smell, then it’s already spoiled.

What goes with lychee?

Lychee has a sweet and bold flavor that makes the perfect martini but it also goes well with quite a few other flavors.

Consider mixing it with some of these foods:

I hope I have answered your question, “what does lychee taste like?” Lychees are a tropical fruit with a sweet and slightly acidic taste. You can eat lychee as is or add it to different drinks and desserts.

If you have never tried lychee, you are definitely missing out! So, don’t wait too long and use my tips to pick out fresh lychees.

What is prosciutto? Here’s everything you need to know
What Is String Cheese? From Its Humble History To Freezing Tips!
What Does Artichoke Taste Like? A Brief Guide to Artichokes
What Is Chocolate Malt? Here's The BEST FAQ For Origin, Taste & More
Corn Flour Substitutes: 7 Ideal Options
What Are Chickpeas and What Do They Taste Like?
What is polenta and why you will love it
What Is Curry?
What Are Rice Noodles? Learn All About This Amazing Noodle
What does sake taste like?
What Is A Chestnut? Is It Really A Nut? Find Out The Answers Here!
How To Store Kiwi: Keeping This Juicy Fruit Fresh 🥝
Click here to cancel reply.