If you’re a fan of Korean food or have visited a restaurant known for Korean cuisine, you have likely seen kimchi before. Even if you never tried it, it’s likely that you would read it on the menu.

In short, it’s a fermented Korean side dish made with an assortment of vegetables. Here’s what else you need to know about kimchi. 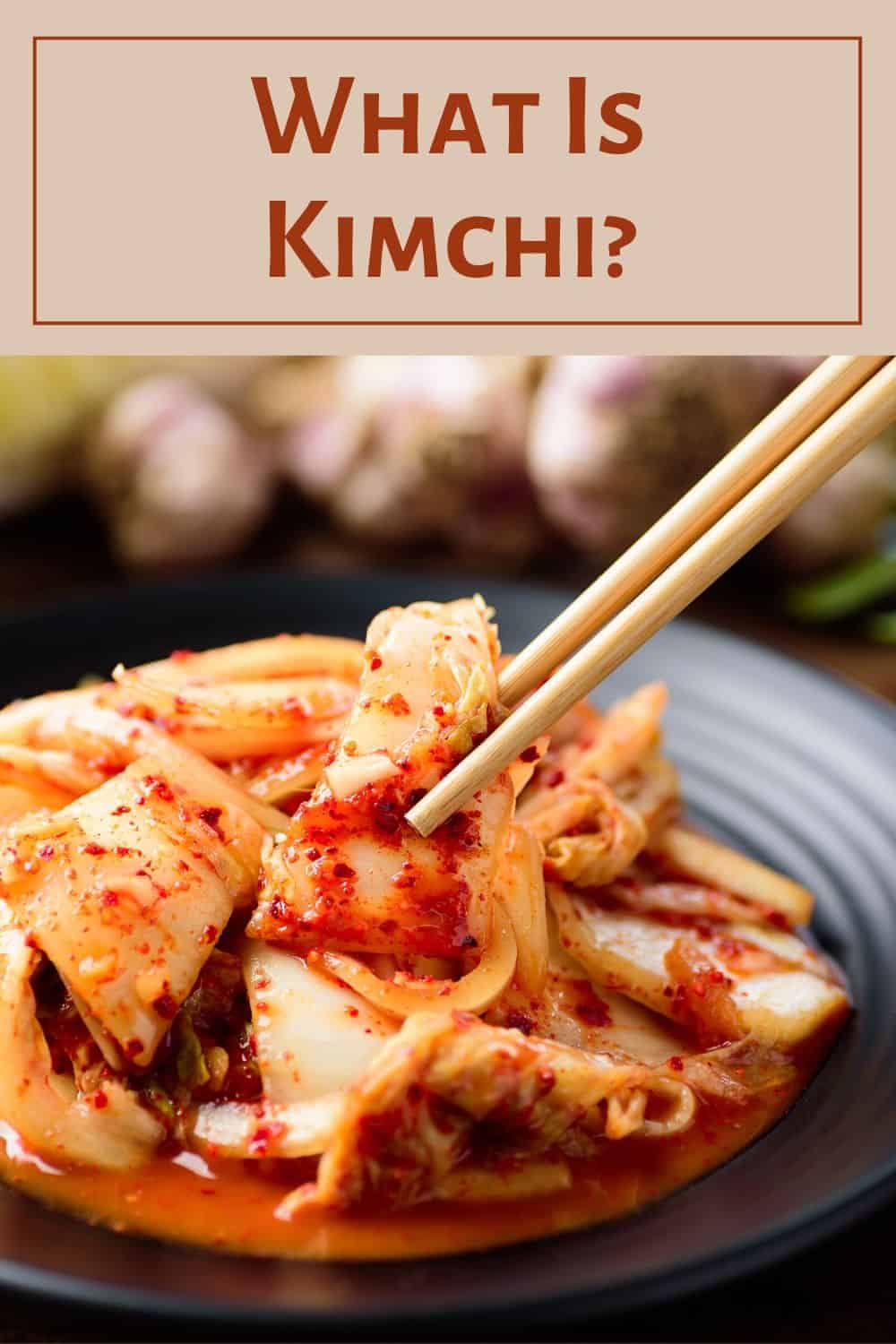 It’s made primarily of fermented vegetables, but there isn’t only one kind of kimchi. There are several combinations of vegetables that you can opt for to make the dish, depending on what your taste preferences are.

Depending on your preferences, you can have garlic and onions for a more intense taste or even radish. It can be spicy if you add red pepper, while in some varieties, it is made of cucumber and has a gentle, mild taste.

It almost always has a sour taste because it’s fermented. The fermentation process is what gives kimchi its sharp, tangy, and sour flavor. If you’ve had sauerkraut, it has a taste that is similar to kimchi.

There are alternative combinations of vegetables and other ingredients, so the way kimchi tastes will vary depending on which kind you’re having.

What Is Kimchi Made of?

Fermented vegetables and seasoning are the main kimchi ingredients. However, it can also have fish, such as anchovies. There are hundreds of ways of preparing kimchi, and most of them are vegetable-based. There are different combinations of seasoning that is used to bring flavor to the kimchi as well.

The most popular kind of kimchi is cabbage kimchi. It is made of napa, bombdong or headed cabbages and Korean, ponytail, gegeol or yeolmu radishes primarily.

The other vegetables in other kinds of kimchi include aster, celery, ginger, parsley, onions, soybeans sprouts, tomatoes, potatoes, and several more, depending on the kind of flavor you’re looking for.

Bringing salt is the most commonly used seasoning for kimchi. It’s different from table salt because it isn’t as processed, so it adds more flavor to the kimchi vegetables.

Other seasonings include chill powder, garlic, raw seafood, shrimp, salted hairtail, scallions, and sugar, among many others. Again, depending on what kind of flavor you’re looking for—sweet or sour, you can change the combination of vegetables and seasoning you use.

In Korea, Kimchi varies in ingredients depending on the region. This might be because of the differences in climate across different regions, which affect what kind of vegetables and seasoning are available there.

For example, northern Korea uses lesser salt and red chili, while southern parts have more, and add in some brined shrimp to the combination as well. 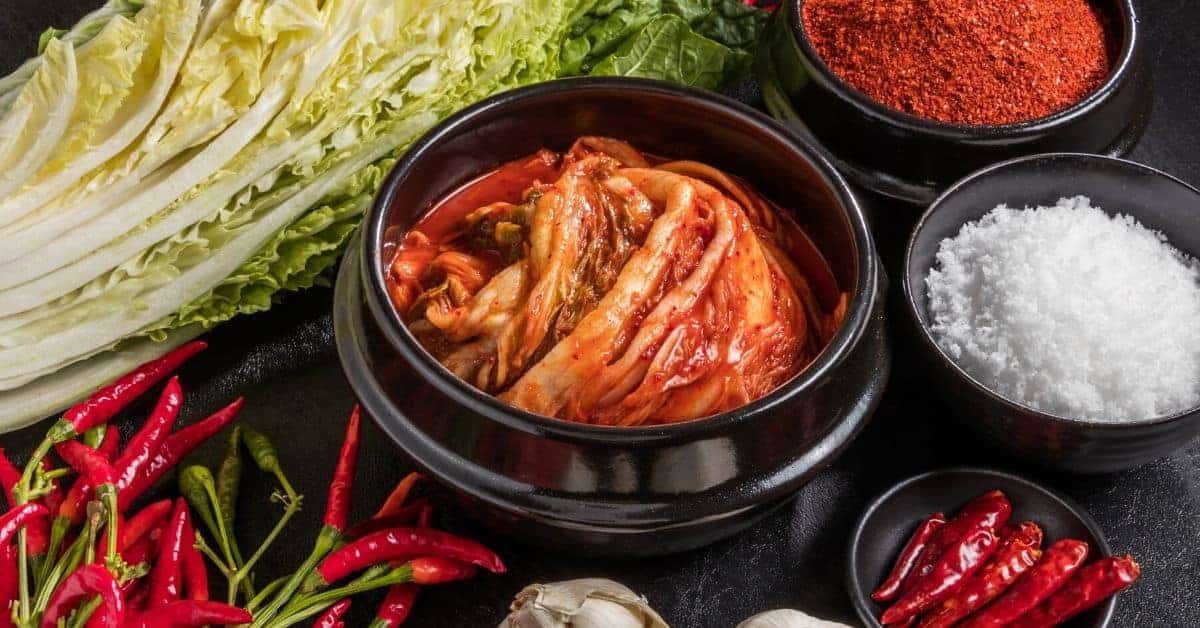 What Is Kimchi Made of?

You can eat kimchi however you want, whether it’s as a side dish to a larger meal or on its own.

In fact, some people even use kimchi as a key component of other recipes, such as kimchi stew. You can also have it with ramen or rice.

If you’re feeling daring enough, use it as a topping on your pizza or as a filling in your sandwich or taco.

How Long Does Kimchi Last?

Kimchi is prepared and then stored in airtight glass jars for fermentation. When you’ve placed it in the jar, it stays immersed in the brine and starts to ferment. The fermentation actually makes the kimchi last for a longer period of time than regular foods.

For the first couple of days, the jar will sit at room temperature and the good bacteria like lactobacillus will help with the fermentation.

After this, you need to keep it in the refrigerator to ensure it doesn’t go bad. It’ll ideally last from a number of weeks to a few months but remember at a low temperature—it’ll keep fermenting at a slow pace, until you can’t consume it anymore.

If you can’t stand the taste of overly-fermented kimchi, you might not be able to keep it for more than three months.

Kimchi is a fermented food, which means there are several kinds of microorganisms in it. In fact, the number of microorganisms present when the fermentation process starts will determine what kind of flavor, texture, and quality the kimchi will have.

Kimchi stored in a jar will continue to ferment slowly for as long as you keep it around. Initially, you’ll be okay with the variations in the taste, but eventually, it will become too bitter and pungent for you to consume.

However, it’s also possible that the kimchi goes bad altogether, possibly from being left out of the fridge for too long, or from opening and closing the jar too often, which exposes the kimchi to the outside air.

To check if the kimchi has gone bad, check if it has any mold or fuzz growing on the sides or surface. It’ll also smell bad, indicated that it is rotten and will need to be thrown out. 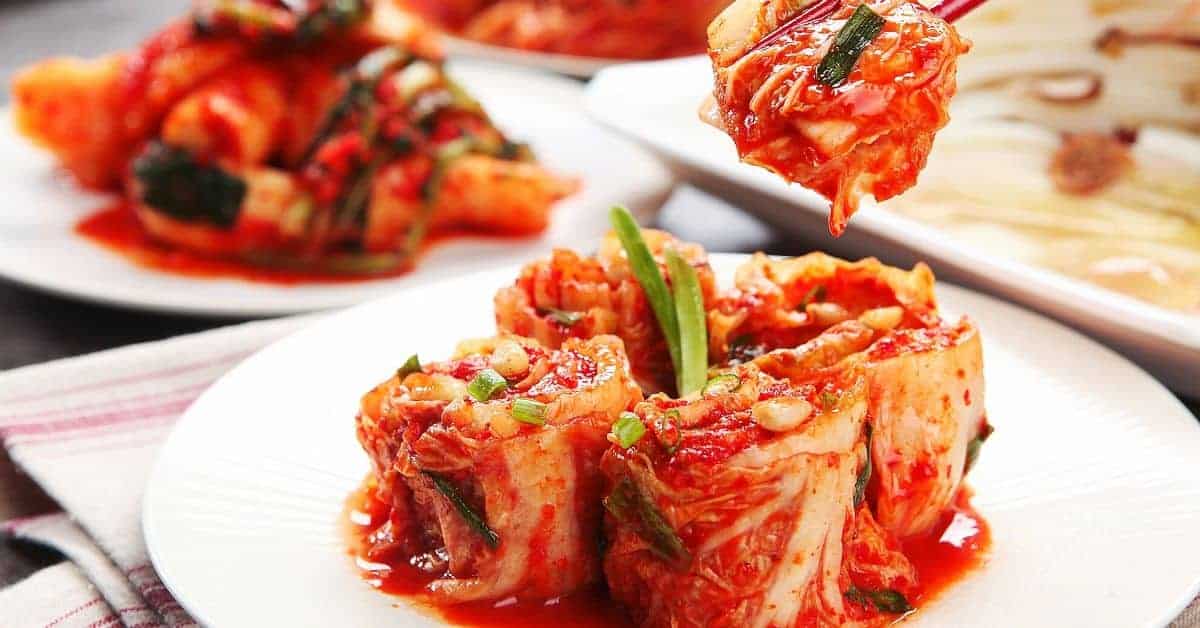 Depending on how much red pepper you prefer, kimchi can either be spicy, mild, or even slightly bland. However, most people prefer at least a small amount of red pepper.

If you’ve never tried kimchi before, it’s worth giving it a chance. It might sound a little out of your comfort zone, but unless you go for it you’ll never know what you’re missing!

What Does Honeycomb Taste Like and How Should You Store It?
What does okra taste like?
What Is a Truffle and Why Is It So Expensive?
What Does Oat Milk Taste Like 🥛 | An Alternative To Cow’s Milk 🐄
What Is Corn Flour?
What does butternut squash taste like?
What Is Yellow Squash? Here's An FAQ With Tips About Your Favorite Gourd!
What is malt vinegar
What Is Caster Sugar? FAQ, Recipes, And More
Grenadine: What Is It & How To Use It? Here's the BEST FAQ!🍹
How To Dry Rosemary In 3 Easy Ways
What Is Gruyere Cheese and What Does It Taste Like?
Click here to cancel reply.